We are looking to add the ability to mark a patient as dead in the ref app UI, both at registration and later as encounters are added to the patient.

I have looked the legacy UI edit patient, however the Deceased check box which doesnt work due to the following error about cause of death

Then I also using the the HFE tag in a form which doesn’t display the fields - date of death, cause of death as expected.

Any ideas of how I can get to do this in the Ref App UI?

What concept(s) are you using for cause of death for your implementations?
How to record the death of a patient in OpenMRS 2x & RefApp 2x?
slubwama (Samuel Lubwama) July 13, 2016, 11:00am #2

I have solved this issue in the Uganda Implementation. I approached it by using a form in the UI frame work extended from Aijar “UgandaEMR implementation module”. The code to UgandaEMR Aijar Module is on repo https://github.com/METS-Programme/openmrs-module-aijar. I think this should be extended in the openmrs coreapps module module. https://github.com/openmrs/openmrs-module-coreapps. @mogoodrich I would like to send in my contribution.

Would you be able to issue a pull request against the coreapps module?

Yes that is okay.

@slubwama, thanks for your contributions!

@mogoodrich, do we require cause of death as the screenshot suggests (i.e., if cause is unknown, the user must find the Unknown concept)?

@slubwama did you get to create this pull request?

No but let me do this on Monday

Will you add your changes in RefApp 2.6 release?

@hpardess the testing of what is in refapp 2.6 was done here: uat-refapp.openmrs.org So take a look and get the answer. 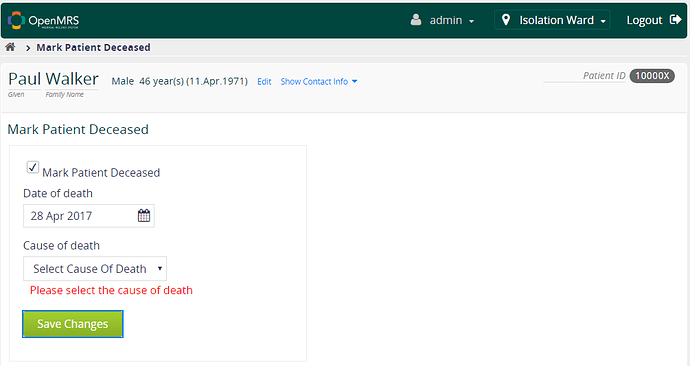 I do not have value in drop-down. Is it a concept? Do I need to add options for this concept?

You need to set the value (numeric conceptId) of the setting named “concept.causeOfDeath” which is described as “Concept id of the concept defining the CAUSE OF DEATH concept”

What concept(s) are you using for cause of death for your implementations?
How to set a patient's cause of death?
Error While Marking Patient Deceased
Why do we require a cause of death concept to mark patient as dead?
slubwama (Samuel Lubwama) May 4, 2017, 9:52am #12

e concept defining the CAUSE OF DEATH concept"

I agree with @dkayiwa. Concept cause of death is a required concept. Found this http://maternalconceptlab.com/search.php?q=5002&source=openmrs

Can I customize it? And add a text field to write details of cause of death and the provider id who set the patient as deceased. Also ward where the patient is deceased.

Can I customize it? And add a text field to write details of cause of death and the provider id who set the patient as deceased.

Just Identified that I forgot to include the person changing the person record is not Included. Raise it as an issue then I will handle it.

About the detailed cause of death. do you want that as a text field or selected field from a given set of concepts.??

I would prefer to have both a drop-down and a text field where a provider can write further details in his language. or may select other option from dropdown and write the details in text field

this is clear now. lets see a work around

How do i configure “Cause of Dead” drop down list - step by step guide.

I was able to figure it out, working perfectly now. 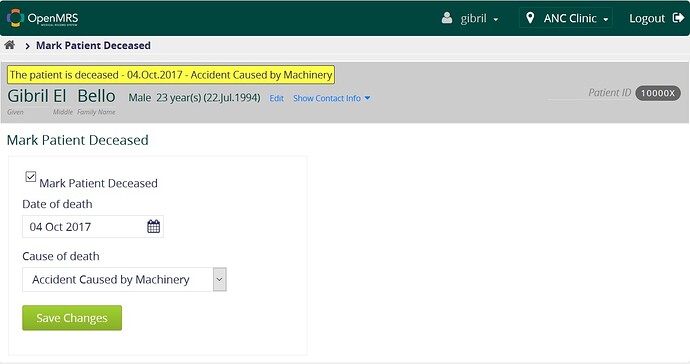 Hello @dkayiwa I am improving this functionality by adding on a text box as requested in https://issues.openmrs.org/browse/RA-134. However there is no free text cause of death for person object. This means there is need of creating an encounter when a patient is marked dead. The challenge of such an encounter is that we cant dictate for people the encounter type. If we are to do a setting as global property for this encounter type it will be alot of settings for this one thing. I am requesting for guidance on how to handle this. Thanks

How about storing it in a person attribute?