Please is there any clear guide explaining bahmni installation via docker toolbox on windows. boot2docker is deprecated

They provide a vagrant box for you to use. Install vagrant and it should just work.

First i thank you very much for your reply , i salute sir. i am a very new to openmrs, i downloaded the vagrant file from https://github.com/Bhamni/bahmni-docker/blob/master/Vagrantfile. what next , am i going to run the file in vagrant. am totally sorry for my newbie question am try to learn up as soon as possible

After you do that, change into the directory where you just cloned then type (after you installed vagrant).

It should handle everything for you

Everything in that repo is important to getting things up and running.

To your original question, I think that must Bahmni developers are on Macs, so I don’t think there are windows instructions.

Thanks once again.based on your explanation .here are the steps i will follow

i will try it out and give you feedback. big thanks for your generousity

@darius, they provide a vagrant box it seems – I was using their code as a reference, they did an amazing job!

@robby .Ok am downloading vagrant now. Meanwhile does the vagrant setup install other dependencies like(openerp,openmrs,openelis) that come with bahnmi.Thanks

No, this is where docker comes in…docker requires linux because it is VERY closely tied to it…which is why vegrant is needed

@robby oh ok. the vagrant birtualbox comes with ubuntu linux bundled. so can i install the docker on the vagrant ubuntu environment.the docker has been my biggest issue. i got the docker tool box for windows set it up and running, but it cant pull

when i do docker pull image(eg docker run hello-world)

it gives me a dns related error , even their tech support was of no help , they couldnt even reply or give me a feedback. thanks

They use centos actually…but yeh

@robby , i am just at crossroads, i have two decsions to make. first to either setup docker on a fresh ubuntu linux machine and do the setup from there or to setup vagrant, since vagrant comes with linux, i will install docker on the vagrant linux bundle and go from there.what do you think

In either case to set up you need Vagrant…just use their box. Also, vagrant doesn’t “come with linux” – you still have to install it. Are there any Bahmni folks that can take over?

@tmlewin Thanks for your interest in Bahmni. Docker toolbox still uses a boot2docker vm under the hood with docker installed in it. Eventhough there are no explicit instructions for installing bahmni using Docker Toolbox, it works with it. We will work on creating a document for using with Docker Toolbox.

You have two options

@bharatak Thanks for the reply since windows has no docker-compose support. i think option 2 is the way to go . but the problem with option 2 is that , i wouldn’t be able to install other dependencies like openlis/openmrs,openerp . i have downloaded ubuntu linux, i am thinking or running a linux setup and do a fresh install.docker toolbox doesnt work in windows that well, i tried to do a basic docker pull command and it was throwing dns related errorr, it couldnt even ping to a url. i contacted support and they couldnt deal with the issue ,that why am considering option 2 if it can setup bahmni with all depencies or i just use my linux pc instead.

@tmlewin I think the docker pull returning a dns related error is something specific to do with your network configuration and access to docker hub. The Vagrant/Virtual Box setup will still download all the relevant docker containers from docker hub using “Docker pull” command. So, I am not sure if this approach solves your problem.

@bharatak I dont really think so , am using direct internet connection, i dont use a proxy, the surprising thing is even the docker support is aware of the issue and they were unable to give me any feedback regarding it. i can do a git clone url on linux terminal it works, but when i try that same command in docker it doesn’t connect.i am currently installing vagrant ,lets me see how it will work out

@robby @bharatak @darius. i have manually managed to fix my docker issue in windows its finally pulling images smoothly. everything works.as i i stated whats next step to installing docker-compose via docker toolbox in windows.i need to install docker compose so i can pull all bahmni dependencies.Thanks

@tmlewin Good that you have fixed the docker issues. At this point in time, you can continue to follow the wiki instructions from the section “Installing Docker Compose”. You might have to use “Docker Quickstart Terminal” and continue running the commands.

@bharatak @r0bby am 99% done ,please i just need you to explain this snapshot. fyi, iam running vagrant on a windows machine 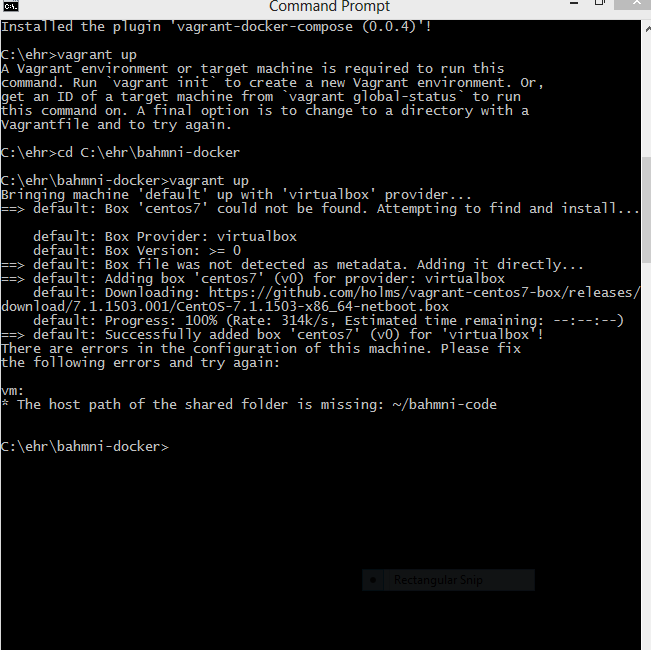