Associating data with the correct encounter

Continuing the discussion from O3: What should be the UX of a non-provider user?:

@ibacher brought up some good points in the above thread that relate to something I’ve wanted to discuss around this topic but it fell off my radar, which relates to how we associate Orders (or any e Encounter data, really) with an appropriate Encounter if that data is not collected in a standard “form”.

It’s always felt like the wrong approach to me that the Order Entry application is configured with a certain Encounter Type, and will always create (or try to use) an Encounter of this type when it is used to place an Order. I don’t think this was ever really intended as “correct” behavior, rather my sense is that this was hacked in because Orders need an Encounter and there is no other standard mechanism for associating Orders with the “active” Encounter.

If a Provider sees a Patient for their “NCD Initial” Encounter, and during the course of that Encounter the provider enters a bunch of data, don’t we want all of this data to be associated with a single Encounter of type “NCD Initial”, regardless of whether that data is collected on a questionnaire (form) or in an order basket widget? Right now it seems that the Encounters collected are based on what is convenient and easy to model in a UI with multiple, independently-designed components, rather than what is correct from a clinical interaction.

Bahmni uses the encounterTransaction (a layer over EMR API) to resolve encounter type.

Bahmni also identifies existing encounter. It has a concept called “encounter session” which is defined in terms of practitioner+location+encounter-type+time-period. So when a POST to encounterTransaction API is called (without an encounter uuid), it tries to find an encounter matching the above session criteria - if not creates a new one. If the encounter is within the session, it will update/append the same encounter. The time-period is configurable - if you always want to create a new encounter, keep the period really short.

Yes, something like this or what @angshuonline outlined as Bahmni’s behaviour would be far better than what we’re doing right now. It would be ideal if OMRS Encounters actually corresponded to clinical encounters rather than “some point where we needed to save some data”.

I’d be interested in discussing this on a TAC at some point, as pursing something like this would have broad benefits but also broad implications.

Next steps could be:

In it’s simplest form this could be something like:

In reality, we will need to handle cases where the appropriate encounter is ambiguous and cannot be determined without user input and, because not all types of data are appropriate for all types of encounters, we should probably be working toward a future where the EMR is aware of an active/open encounter and prevents users from working within multiple encounters simultaneously within the same tab.

Perhaps this would be a good topic for a TAC call with broader participation?

@mseaton and I continued brainstorming this on this week’s TAC call. In general, we agree that OpenMRS would benefit from recognizing an “Encounter session”. Below are some rough notes from the conversation.

What changes for an app/esm developer?

Note: there are related conversations in the OpenMRS3 Slack channel.

I’ve deleted my earlier post as I missed some of the earlier conversation which addressed some of my comments.

I still think there is an over-emphasis on how to store the data rather than how to get the data. There are multiple consumers of this data not only clinicians, i.e. M&E, managers, etc. I also think that it doesn’t fully account for the cases where a lot of infomration is collected by different users during the same episode of care. A common workflow for us would for an outreach worker, a nurse and a clinician and possibly a social worker to enter data. All of this collected data should be viewable across these user types.

I think the goal is to establish some way the api can help get all the “relevant” data that the user may be looking for. The devs behind frontend modules ideally wouldn’t be the ones having to come up with clever api calls to get the “right” data.

2… Use the Bahmni approach above. I think this helps solve the problem of how to limit too many encounters from being created. I don’t think it should govern how we link relevant data across encounters, as it seems too strict to me and seems focused on the point-of-care user instead of other personas. However, it’s likely I don’t understand the full extent of the bahmni approach and it may be the exact right way of choosing how to “store” data. I would be interested to undersand better how it helps “get” the right data for different persona types.

Lastly, when it comes to create an API to get data, I think it’s better to have more than less. Changing the data model is something that requires a lot of consideration and should be done very carefully. I think adding on an api (or simply making it easier for users to come up with clever ways of efficiently and performantly getting) should have a lower barrier and it should be easier to get good ideas into core or at least some sort of module that is widely shared.

We are aiming for orders, observation, form data, notes, allergy & problem list changes, etc. organized within clinical instead of technical transactions – i.e., closer to the left than the right example (note, the idea is all the same data are being collected in both examples, the only difference is how those data are organized into encounters): 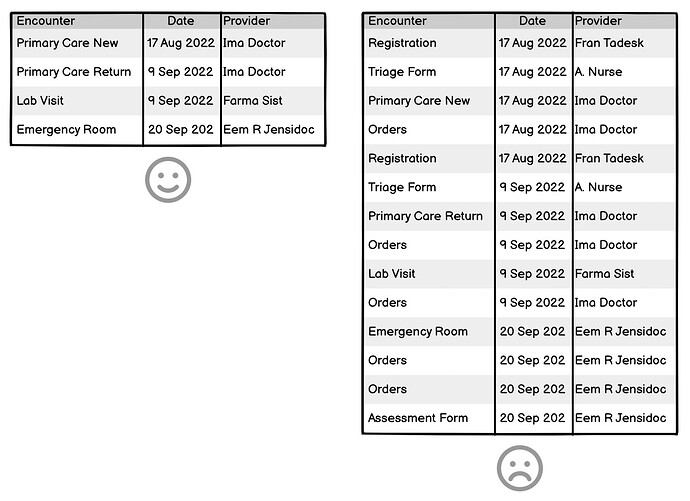 Essentially everything related to the patient’s time is put under a single encounter. Does this mean we will deprecate visits? Also, how does this work in the inpatient setting - single encounter for the the entire admission? One useful thing about the multiple encounter approach was that it was relatively easy to get grouped data. I think we still will need to a lot of effort to make it easy to get the right data.

Also, another question occurred to me: are we removing form_id from the data encounter data model? In the above, presumably you can have multiple forms per encounter. Where does the form_id get stored ? a new table form_encounter_map?

Essentially everything related to the patient’s time is put under a single encounter. Does this mean we will deprecate visits?

The goal isn’t to group by time; rather, to group by clinical transaction. If you see a patient returning to your HIV clinic, ideally all the notes, orders, form data (observations), etc. you gather as you see them at that point in time would go into a single clinical encounter (instead of into separate Form, Notes, and Orders encounters).

For example, if the patient sees a dietitian while waiting on you in your clinic,