Test out the updated Atlas!!!

Atlas has been receiving improvements and new features as part of the GSoC Project OpenMRS Atlas 3.1, and is open for testing on atlas-stg. Feel free to create new markers and experiment with them! You can also edit/delete/update your markers! 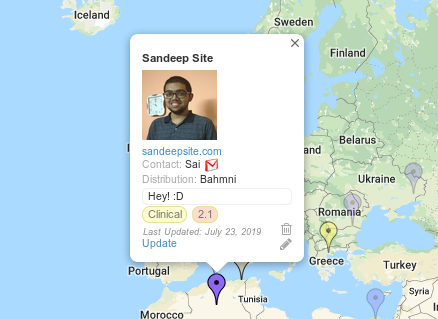 Fading of markers can be toggled in the ‘View Panel’.

There is no direct link for it in the interface but here’s the link of the RSS Feed, which is where all the changes on atlas get posted. If 2 similar entries are posted in under 5 min, the 2nd one gets ignored.

I made a short demo of the work that has been done for the GSoC mid term presentations. You could take a look at it to get a better idea on how to use Atlas.

Please post any bugs you find, here, or send me a DM. Thank you.

Do you have a link to some sort of documentation on how to use Atlas? For instance, one may want to test but may not know how to create, edit, delete markers, etc.

My bad! Here’s the documentation. Its outdated but demonstrates how to add/delete/edit markers. I’ll try and update the docs after I get home.

This looks really awesome - it’s a great thing that we can visualize the reach of the OpenMRS project through Atlas, and I hope that this new version looks will help people keep it more up-to-date.

If I find any bugs, I’ll let you know.

@heliostrike Nice work and your video was great.

How can I edit my sites that are (fading) on the map. How is the controlled? I have a bunch already on the map, but “Edit my site” does not appear to change my ability to edit. And I don’t see an edit icon (pencil) on the site information.

Is there interest to connect sites with the WHO Digital Health Atlas? https://digitalhealthatlas.org/ Maybe you could add that field (URL) to the site information. I think @jennifer mentioned using this.

Thank you from reporting this to me! Querying the database, I see that a lot of markers are linked to usernames like ‘openmrs_id:ball’, rather than just ‘ball’. I updated your markers so now you should be able to edit that marker.

Also, there is already a site URL field that you can fill in. Try editing the marker.

Thanks @heliostrike . I can edit now. However after updating the site, it still appears faded.

Could you give me the name of the marker you edited? Is it “Hinche EMR”? The entry is updated and will no longer be faded once the page is refreshed. I think I wrote a bit of code to fix that bug and un-fade without needing any refreshing, but its either that atlas-stg is looking at an older version, or I accidentally deleted the fix in a newer PR. I’ll take a look around and get back to you.

‘openmrs_id:ball’ was being stored in 2 tables. I updated one and not the other, so the database wasn’t being update. I updated the database now, so editing should work for you. I’ll make a PR to update the database, and hopefully the entire problem will be resolved by evening.

It seems to work now. Thanks for your speedy response.

Thank you for testing out atlas and leading us to such a huge issue with the database.

How can I edit my sites that are (fading) on the map. How is the controlled? I have a bunch already on the map, but “Edit my site” does not appear to change my ability to edit. And I don’t see an edit icon (pencil) on the site information.

@ball, now that @heliostrike discovered & fixed the issue with legacy data, atlas-stg should be behaving properly for you. Have you seen the “update” link on your sites? If you’re managing Atlas markers manually, all it takes is a tap of that link once a year to keep your sites from fading. Better yet, Atlas will send an email reminder before a site begins fading with convenient links to manage your marker.

See if you can find another bug before we promote to production (probably this weekend). If you can, I’ll buy you a drink.

Is there interest to connect sites with the WHO Digital Health Atlas? https://digitalhealthatlas.org/ Maybe you could add that field (URL) to the site information. I think @jennifer mentioned using this.

The WHO Digital Health Atlas page says it’s open source, but I wasn’t able to find the source (just this empty repo). If they exposed an API, we might be able to integrate… but it looks like DHA might be a different granularity of info than OpenMRS Atlas. We could certainly link to it within our help text as another resource to consider. Thanks for the tip!

I am able to update my sites, add new ones, delete. It all looks great. Nice work by @heliostrike. It’s nice to see that Atlas is back.

Don’t think I can find another bug, but a

is enticing. The “edit site” popup occasionally disappears while I’m modifying data, but I wasn’t able to reproduce consistently. It happened 3 times, but I was able to use and enter information. Slightly annoying.

The “update” link isn’t what I expected. It seems to un-fade the site, so a very useful feature. I thought it would allow me to edit/update the data. I assume this text is built into the atlas software. The link would be better named as “Confirm”, “Save”, or something else.

The “update” link isn’t what I expected. It seems to un-fade the site, so a very useful feature.

Yup. The ‘update’ link just quickly updates the ‘date_changed’ of a marker and unfades it. It doesn’t update any other data(unlike the save button in the edi window), just sort of pings. I can see how the name is a little misleading.

The “edit site” popup occasionally disappears while I’m modifying data, but I wasn’t able to reproduce consistently. It happened 3 times, but I was able to use and enter information. Slightly annoying.

Which browser (name & version) are you using? Any chance you have a trackpad on a laptop that you’re accidentally tapping? Any mouse click outside of the bubble will dismiss it.

The “update” link isn’t what I expected.

In an earlier iteration, the “update” link directly followed the “Last update: July 1, 2019”, so it read like:

which might have helped clarify what you were updating. Perhaps “Refresh” or “Validate” would be clearer? Or “Still kickin’”?

LOL. That’ll be fun when we get to localizing Atlas and translating it into other languages.

Strange. That’s the exact same version I’m using. I still haven’t been able to reproduce the “bubble interrupted” bug. Let us know if it continues to happen to you and if you can discern any pattern or, better yet, find a way to reproduce it.

Well, after some of your recent changes to atlas-stg, it was looking so good that – bit by the continuous deployment bug – I went ahead an applied the database changes and promoted release #87 to production! Congratulations!!! 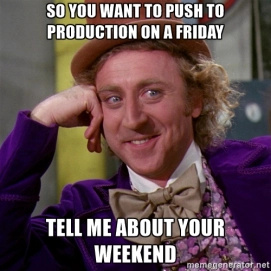 In the spirit of continuous deployment, this doesn’t need to slow us down. Let’s continue to get changes into atlas-stg & tested there. But now there’s no longer a scary wall to promote those new changes to production.

@ball, continue to do any testing on atlas-stg; however, feel free to make any real updates to your sites at atlas.openmrs.org.

We can work with @jennifer to make an announcement next week!

In preparation for that, could you create a brief set of release notes… maybe on your project wiki page. Just a brief sentence on changes, focusing on things users will notice (don’t bother with admin features). For example:

@heliostrike, despite testing pretty thoroughly on staging, it took deploying to production for me to find a bug:

I’ve described the bug and how to easily recreate it. Assuming the solution for ATLAS-200 is a simple fix, feel free to merge the change, deploy to staging, and – if it’s working staging – deploy to production. That is, don’t feel like you need to wait on me to deploy a simple bug fix like this to production.

The ticket led me to find another bug where hitting ‘Edit my site’ and then the edit button sometimes doesn’t open the edit window. I fixed them both in the latest commit.

I also deployed the changes to production, so yay!