Did any one say that they will not make it on Monday? If none, the earlier we kick off and finish this sprint, the better.

Ok that’s fine although I don’t have access to the calender, I have sent mail for it to be added on the calender cc @dkayiwa

Ok that’s fine although I don’t have access to the calender, I have sent mail for it to be added on the calender cc

Help desk may not add the event for you to the calendar. But they will grant you access to add it for yourself.

@odorajonathan is there any reason why the board does not have columns for tickets that are ready for work and those under review?

you dont have to give a column a status, you just rename its heading and add/drag and drop there, the right "status pannels"

@tendomart I shaIl add you to the dev team. You seem to have started progress on a ticket

@odorajonathan I would like to attend the sprint meeting to get orientation about the Sync2.0 module so I take part in the sprint too.

I am having issues setting up my local instances of openmrs-standalone…the issue is with the username and password (they are invalid)…have tried username as ‘admin’ and password as ‘Admin123’ and it is still failing…have also tried credentials shown in the runtime file without success too though I think that’s for connecting to the Database.

Its better if you just run a ref app standalone and use the credentials below
user : admin
pwd : Admin123

@reagan how far with setting the environment?

I had been setting up the platform standalone and manually adding the omod files which has proved Abit cumbersome with so many errors that keep popping up though I was breaking ground…iv have now switched to use reffapp which is way-easier to set up…the two instances are running…I have created some patients but I keep getting an error when I try to sync…most likely due to some of my settings…let me share the error-logs and some screen-shots…https://pastebin.com/pBBYrTYp

Sorry about it. Its standalone Reference Application this link can guide you 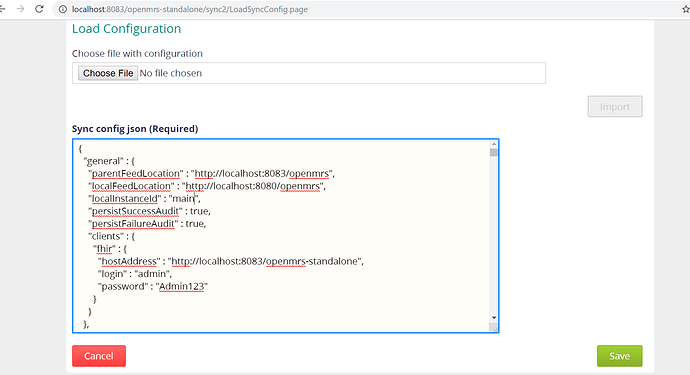 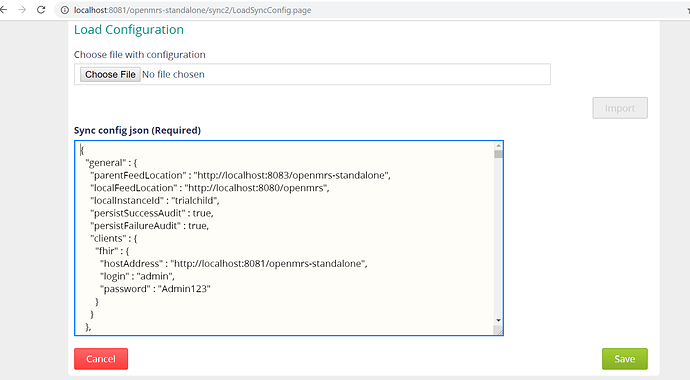 were you successful in doing a trial sync of newly created patients?

I used this link for that part and somehow it worked. Just change the required parts.

@reagan I created the patient but when I perform “Manual Push to the Parent” on a Child server, all the changes done on the server were being “pushed” to Parent Server and the push was successful, but when I clicked on Audit log, the status was failure. How to go about it I don’t know

it would be kind enough to give me some pointers on what exactly to change…because it seems there is a problem in connection somewhere…I think the child needs to give some credentials to access the parent server which i dont know how to give…Is there something missing according to my screen shots that I have shared up?