While preparing some numbers for the Q3 Town Hall, I saw some interesting things and I’d like to share them, recognize some people, and ask some questions.

What have we worked on?

By far the most active repos in github/openmrs are the radiology module, the reference application distro, and the SDK.

The activity in the Refapp distro testing and the SDK is courtesy of the @SolDevelo team. I’ve said it before, but I’ll say again, thanks!

I’ll admit I was surprised when I saw the level of activity in the radiology module. (I’ve seen @teleivo be super-active on the lists, so I was sort of aware.) @teleivo, can I invite you to present on a Developers Forum and give us some more insight into what you’re working on and what the target is? Implementations doing anything with radiology should know more about the work! (I note that @domsch is another top contributor this quarter, who’s working on radiology too.) 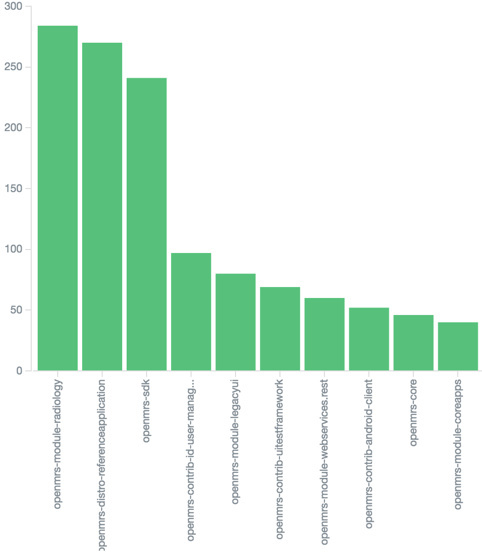 Of course there’s a lot of activity in the OpenMRS ecosystem outside just our github organization (e.g. the bahmni/bahmni-apps repo had >350 commits over the same timeframe, more than the most active repo under the openmrs org). Hopefully next quarter I can adjust my scripts to cover the broader ecosystem.

Who has been most active?

The 10 most active OpenMRS developers (measured by commits) over the last 90 days have been:

I’m a bit nostalgic to not see my name there (I’m #14), but great work @dkayiwa, @raff, @teleivo, @gutkowski, @adamg, @dmytro.trifonov, @tmarzeion, @wyclif, @mogoodrich, @domsch! To those of you I haven’t interacted with, I hope we cross paths soon.

I hope to make this kind of post a regular occurrence, and I welcome feedback on how to improve it! For example I might play around with counting lines of code touched, rather than number of commits. And as mentioned I need to search outside our github org.

@darius, thanks for posting this and for sharing these results and the metrics. It would be great to figure out how to get the larger community ( and also to figure out the impact on our roadmap!)

to the top ten- thanks!! to everyone else who is contributing( even if only one line of code or one read of a talk post)- thanks also!! it is a sign of our thriving community that we have this many people contributing.

@teleivo, can I invite you to present on a Developers Forum and give us some more insight into what you’re working on and what the target is? Implementations doing anything with radiology should know more about the work!

yes, I would like to show whats going on with the radiology module.

what slot would be good? I would generally prefer a Monday.

I had been thinking to do it on a Thursday Developers Forum, e.g. on Oct 6.

We could also try a Monday Design Forum, e.g. on Oct 4.

(Personally I would prefer Thursday Oct 6 given my travel schedule, but we can look for other times too.)

lets do it on the 6th October then

It makes me extremely happy to see this! Great work!

Thanks for posting this and you the top ten,Weldone. Also thanks to every one who has done something.

sounds good. i will put @teleivo on the schedule.