Not sure if this is a bug or just my instance but clicking the name of the patient within the Order Entry OWA does not link back to the patient dashboard: 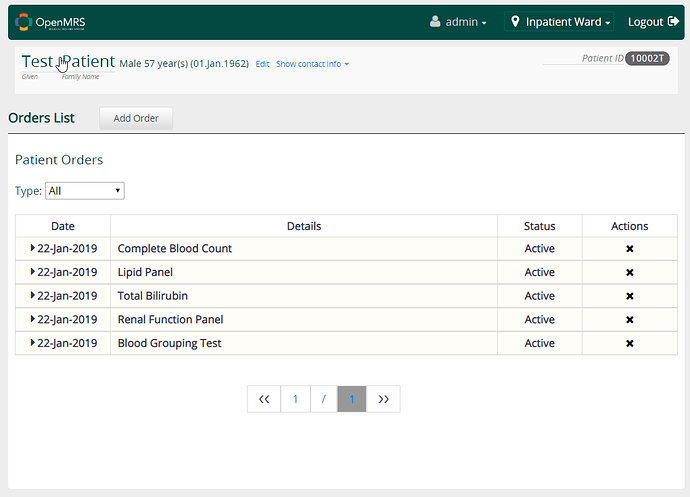 So after I order the labs and/or prescribe medications, I have to go back to the main menu and then search for my patient.

@dkayiwa you’re pointing @jesplana to a pretty long thread, which specific instructions do you think he might have missed?

@jesplana did you take the 1.0.0-beta4 version from here: https://addons.openmrs.org/show/org.openmrs.owa.orderentryui ?

… as well as following all the other instructions stated on the first post of the thread that @dkayiwa pointed to?

Thanks @dkayiwa, I followed the post and got the application to install properly. However, I noticed that my Reference Data Module (v 2.8) is not running. Could that be the issue?

and @mksd, Yes, I downloaded it from the link you provided. And followed the steps in the link @dkayiwa pointed.

@jesplana you mean Reference Metadata Module 2.8.0 right? It looks like it’s required as per the post pointed to by @dkayiwa. Can you start it manually from the admin console?

And if it doesn’t want to start could you look at the error log generated when you click on ‘start’ button for that module, and paste it here: https://hastebin.com ?

@mksd Yes, the Reference Metadata Module 2.8.0. For some reason, that module and the Reference Demo Data Module 1.4.4 are not able to start. Here is the link to pastebin: https://pastebin.com/M6eJNdvN

This is what I see that is related to the metadata demo the module.

It looks like Reference Metadata is hitting a wall when it tries to edit an already existing order frequency:

So when Reference Metadata is being started it tries to edit an order frequency that is “already in use”, meaning it is already referenced by an existing order… Does that make sense, could you somehow have gotten to that point on the instance where this occurs?

It’s not obvious to know which order frequency is upsetting OpenMRS, probably either one of those two:

That make sense. But for some reason, I can do everything the Order Entry UI module says except click on the name of the user to go back to the patient dashboard. Even with the two modules I described above are disabled…

I haven’t looked into the details (yet), just assuming that you should follow the instructions as provided by @dkayiwa.

Now another step to unlock this problem of Reference Metadata not starting it to make sure that you use Metadata Deploy 1.11.0-SNAPSHOT, can you try that out?

Thanks @dkayiwa for pointing us to the corrective commit in MDD.

I released version 1.11.0 of the module: https://addons.openmrs.org/show/org.openmrs.module.metadatadeploy

Any documentation/steps available to add few more tests to the existing elements?

Do you mean unit tests?