We have an implementation use case for managing prescriptions / drug issual using OpenMRS.

I’ve done some research - it seems that we used to support iDart for drug management in the past, but not any more?

I also came across the OpenHMIS pharmacy module by @ibewes. I wonder how far along you are with this module? is this under development, and if so, when do you plan to do a release?

I also saw that dispensing is part of the work to be undertaken under the reference application, as seen here. Any idea of what its latest status is?

Would appreciate any advice on this matter

Hey @surangak… we (the OpenHMIS team) started work on the Pharmacy module a while back but changed tack a little after working on it for a while. Most of our short-term pharmacy needs revolve around managing the pharmacy drugs as inventory, rather than managing prescriptions, drug interactions, and similar. Given this, we focused on building out a simple inventory module, which we released last year and is still under active development.

We would be really interested to hear is actually needed for a pharmacy system, apart from what is already provided by our (or other) inventory systems. Does it even make sense to include this inside of OpenMRS or are there other systems which already provide this functionality that we could integrate with?

Thank you for your input @ibewes . I see that there are multiple efforts to support drugs within OpenMRS - There’s also a module thats been developed by AMPATH. I pretty much have the same question that you raised… does it make sense to include prescription within OpenMRS? I for one, don’t think so. I’d be happy to hear what others (@burke) think. Are there other systems that people with our use case use?

While observations within OpenMRS have been used as workaround for all of these, the vision for drug orders, dispensing, and administration is:

So, we’d look to modules for dispensing & administration features. We could probably say the same for any advanced drug ordering features, since the OpenMRS core should be focusing on the fundamental pieces of EHR information needed across all systems in their simplest form.

@surangak, I presume you don’t really mean this, but there is an orderentryui module I was working on, for managing drug prescriptions against the order model in OpenMRS platform 1.10+. It’s not complete, but it’s within striking distance.

Hi Darius. That’s great. We needed such module (simply: adding drugs, and print a prescription, and set them to ‘printed’). could I ask about your module, or would you share it? Anyhow, we will develop it. Thank you, Barbara

@darius, @mksd, @burke: I could not find a way to add drug orders (provider will list the drugs for a patient in a specific visit), print prescription and add lab orders.

Above mentioned functionalities are very basic requirements that a system must have and record it for each patient. Could you please guide me how to record drug order, lab order and print prescription in OpenMRS 2x?

@hpardess, unfortunately the OpenMRS Reference Application does not support recording drug prescriptions or lab orders, unless you do some dev work. (The underlying Platform does support this. And yes, we know these are basic and common requirements; we’re looking for someone to implement these in our reference UI! @mksd’s group forked the orderentryui module I mentioned earlier in this thread, but I don’t know if their fork can be used directly on the reference application.)

If you are looking to do a “standard EMR” we recommend you consider the Bahmni Distribution of OpenMRS. It support both drug orders and lab orders.

@darius: Thanks for reply. but I want to use OpenMRS only. I looked into Bahmni Distribution, it was very complicated.

Also used orderentryui module which is developed by @mksd 's team. Here are the screenshots: 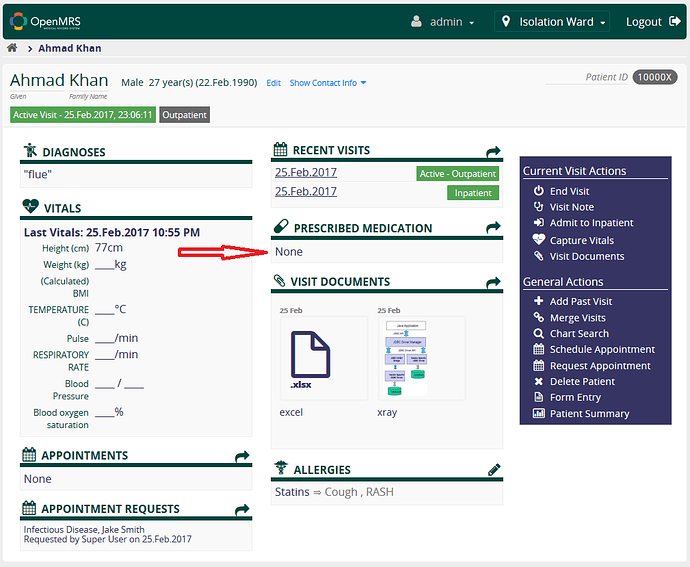 @mksd: orderentryui module should be related to a visit and better be part of visit note or should appear same like a visit note in a visit. Also i didn’t get the drugs list in “New Order for:”. how to add the drugs list? Is there a dictionary/concepts list for this drop-down?

@hpardess, the Medication Mangement UI module has been discontinued. In its current version, the module is not recommended for production use at all.

In order to be able to add a drug in the list, you need to first have it created as a normal Concept (of class “Drug”) and then create a Concept Drug that links to this concept by going to Administration -> Manage Concept Drugs 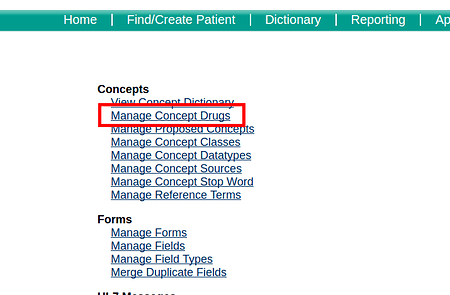 From there you can create new drugs, linked to drug class concepts. It should then appear in the drug list in MMUI screens. If not, you may need to rebuild the index, such as explained here: Drug dispense and administration in OrderEntryUi

I have the list of drugs. here is the screenshot: 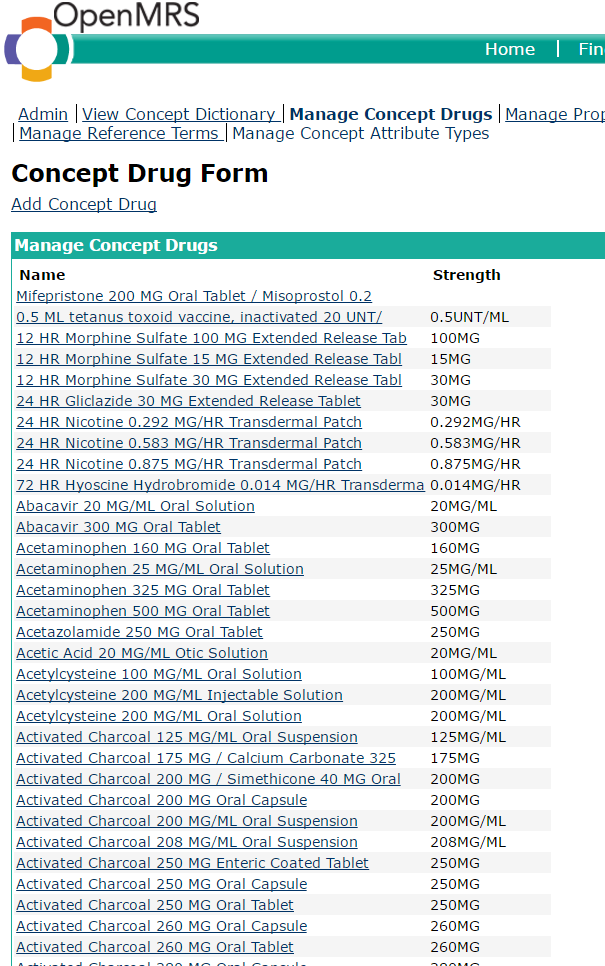 Also I rebuild the Maintenance>Search Index as explained in provided link. but still it drugs list is not displayed.

you can test it here

There’s some angularjs related exception shown in browser console. You might wanna look into it to get resolution of your problem.

@hpardess , did you use Mekom Solutions’ fork of Order Entry UI, here? (build it on dev branch)

i am looking for orderentryui, can you please send omod file of the module.

This is how to build our fork of OEUI and fetch the OMOD:

Disclaimer: This is a work in progress that we have discontinued and that lingers on our repo. So we won’t provide much support on this.

Yes, I used the dev branch. It returns the list of drugs but not shown in drop-down because of client side error. 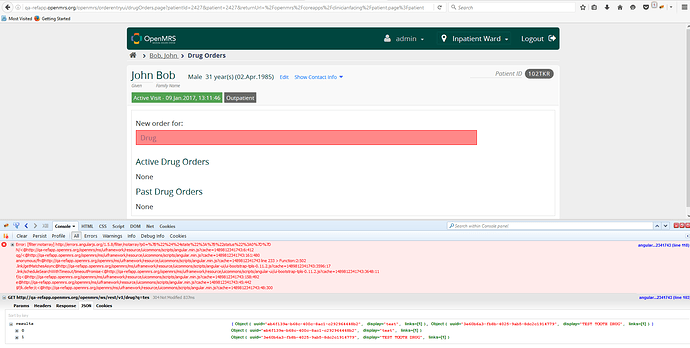 Prescription printing, order drugs and Lab test order are primary requirements for a hospital. What do you suggest and how to implement these functionality in OpenMRS 2x and RefApp 2x?

We have a POC system under development and we had similar issue when we thought on drugs management. What we basically did was create an OpenMRS module for pharmacy to host our business logic domain and leverage the drug order module that exist in openMRS. The other thing we did was to integrate with openHMIS.inventory for stock management.

@hpardess you’re right that these are standard requirements for a hospital EMR, but the OpenMRS Reference Application does not support them. You would need to build the functionality in a module, possibly starting on top of the code that has been mentioned in this thread.

As I mentioned earlier in this thread:[quote=“darius, post:8, topic:1719”] If you are looking to do a “standard EMR” we recommend you consider the Bahmni Distribution of OpenMRS. It support both drug orders and lab orders. [/quote]

You said Bahmni was “very complicated”, but building this functionality out on top of the reference application is complicated too.