I realized that at least a few of us who are associated with / love OpenMRS will be attending MEDINFO 2015 next month. I think @akanter and @thannan will also be attending. Anyone else who wants to hang out and talk OpenMRS?

Indeed,I will certainly be there and would love to get a group together…

I will be there and so will @jteich

If attendees want to publicize a time & place to hang out, please make sure to share it here. Will make sure it gets out via Twitter, hashtags, social media, etc.

Happy to meet up with anyone who’s in the neighborhood.

Suranga, I would love a chin wag over a coffee. I posted a significant (for me) Topic on OpenMRS Talk yesterday and would like some support and feedback to myself and the two listed Profs on the Topic.

Hi All I will also be attending Medinfo 2015 from 21-23 Aug and would be glad to attend an OpenMRS meetup. Regards Chris

Oh, I didn’t really expect to see such a big attendee list. We could find a good restaurant that works for all of us. Would Friday night (21st) work? A good chin wag and co-ordinated grumble session will do us all a world of good

Wait, I just looked…this is in Brazil!!!

Did someone say churrasco?

Did someone say art galleries and museums?

Friday sounds great. So does churrasco.

The big conference dinner is Friday – so how about the OpenMRS group dinner on Saturday? Sounds like everyone will be there at that time.

Oh yes. Well, i’ve no objection, Saturday works for me. Lets meetup and see how things go. BTW, sorry that I had to miss your tutorial today

Okay, final cut: we have a time for an OpenMRS hangout that I think works for everyone: 4:30pm Saturday; meet outside Room 1. Bring your friends…

OpenMRS hangout that I think works for everyone: 4:30pm Saturday; meet outside Room 1. Bring your friends…

@jteich and others, would you like us to send some Tweets about this?

I’m not a major Twitter user, but I’m delighted to supply this image to record a collegial and useful meeting. Two panels and art least two posters were given on allergies and the Ebola system, and generated a lot of questions and thoughts from folks who might want to use OpenMRS in their settings. 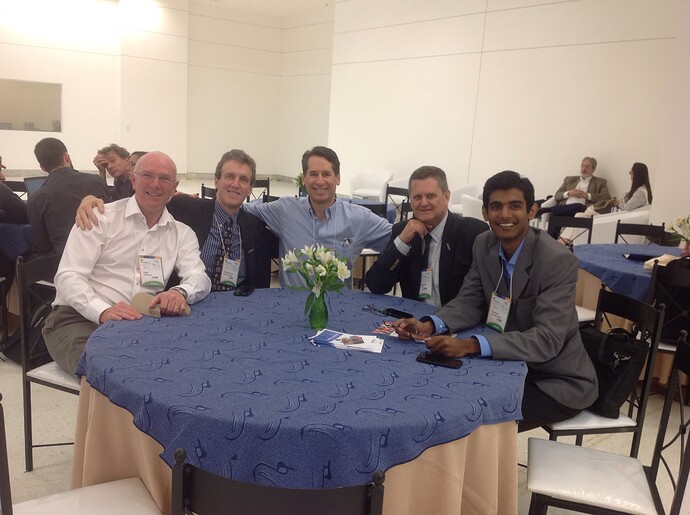 I would love to hear the reaction to the OpenMRS work – especially the Ebola Response.

I agree with Ellen! Very much curious to hear about the Ebola Response

Most people were pretty impressed with the work that has been done. They were especially curious about using the tablet, and how the software was designed to be usable under those glove and goggle conditions. One participant thought about using the same technology for elderly people in a motion-disorder clinic, who live under an apparently similar usability cloud. And several people wanted to know what would happen to it next, and whether it was being made generally available.