There is a team at the OMRS17 Hackathon in Lilongwe, Malawi who are working on the Condition list for the RefApp. This has already been implemented in Bahmni. Thanks @darius.

These are (crude) mockups of the 2 pages: 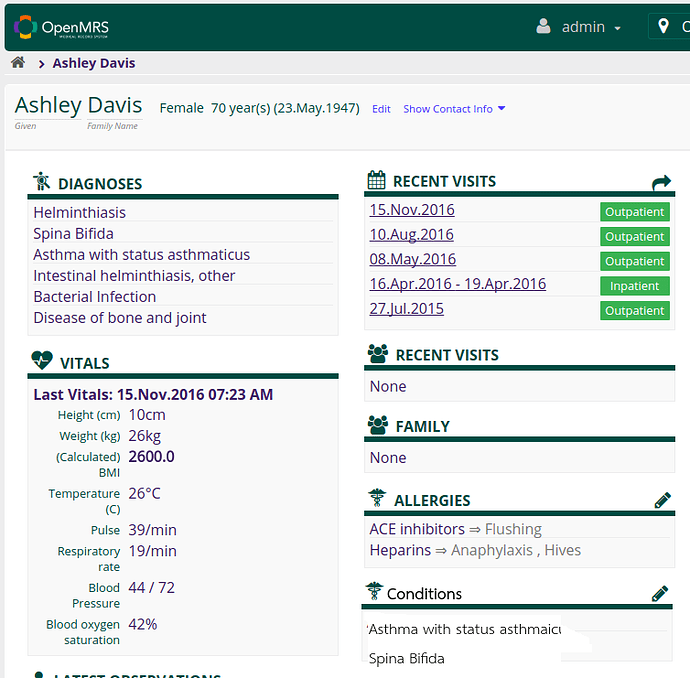 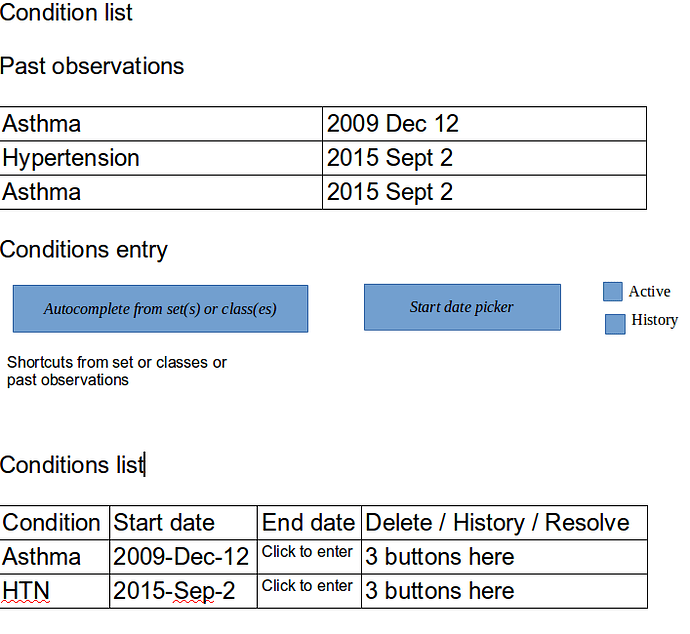 Great to hear! This is an incredibly valuable addition to the RefApp.

Burke, your comments reflect the thinking of all those involved in the hackathon. The conditions are not just diagnoses, but also symptoms.

Please note the code is not complete.

Since we have a pretty good idea of what should be done, I suggest we write this module to completion and follow the correct practices. Writing code in1.5 days meant hard-coding stuff in the logic in order to have something by the end of hackathon. 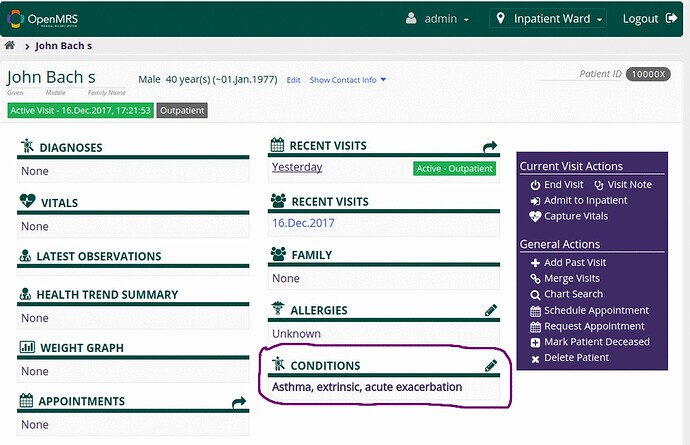 Here are some snapshots of what we came up with.

@burke.Has the team recorded any clips.For the OpenMRS University?I would really like to look at the Procedure?

i doubt if we did any recordings, checkout #OMRS17 for some pics probably

@k.joseph they may not suffice ,may be notes or some sort of documentation!

This is great! So nice to see the progress in such a short time. Wish you could have had more time to work on this. (Maybe it would be helpful to have a setup sdk workshop before the next OMRS conference or during some BOF so that it wouldn’t cut into the hackathon time.)

Thanks for working on this everyone, I will echo what @ball said about great to see so much progress in such a short time.

Where does this code live? We may be able to do some further testing and/or tweaks…

I like the simplified actions on page 2 (Conditions), but what is their meaning (+, -, file, x)? If you hover over the symbol, does it show a word description (ie. active, inactive, history, delete)?

I’m assuming these were just default action icons. If I were guessing, I’d guess “+” and “-” to move items up/down the list, file icon to “file away” as inactive, and “x” to remove.

On page 3 “Add condition”, what do you expect from the red “Remove condition” button?

@burke @jteich - We discussed and agreed about replacing the “Diagnosis” section with this new feature and putting it prominently on the clinician-facing dashboard. Do you think the English word for the section should be “Problems”, “Problem list”, “Conditions”, or “Condition list”?

While any of them are reasonable choices for the title, I’d probably go with “Conditions”, since it’s both forward-thinking and concise.

On page 3 “Add condition”, what do you expect from the red “Remove condition” button?

Where does this code live? We may be able to do some further testing and/or tweaks…

Here is the github link.

@burke and others: should conditions be added one at a time or multiple entries at a go (like most ref app add pages)?

Thank you all for the useful feedback!

@burke and others: should conditions be added one at a time or multiple entries at a go (like most ref app add pages)?

I would expect conditions to be added one at a time in most cases (e.g., like allergies), since we may want to allow additional information to be gathered alongside the condition as well as provide a screen (or DIV) modules could hook to add additional features or decision support in the future.

Hey folks, I have a lot to say about problem lists versus diagnoses (visit-specific) and history. Please see: Incorporating Encounter Diagnoses into openmrs-core

I would love to have a more interactive session about this where I could contribute. Hard to do this via a talk thread without a working version in front of me.

I think we’re in full agreement that encounter diagnoses, problem lists, and past medical history are distinct. If you have a lot to say on the topic (more than you can easily type into Talk), you could use om.rs/designtime to propose a design call on the topic and we could use that call to capture your input and bring it back to Talk or wiki docs.

FHIR defines Condition as a general resource to represent “detailed information about a condition, problem, diagnosis, or other event, situation, issue, or clinical concept that has risen to a level of concern” and then uses this Condition resource for encounter diagnoses, problem lists, and past medical history.

For anyone who may want to play around with the module, the latest code allows ability to Create Conditions, Manage (make active/inactive, move to history, void) and view active conditions on the Patient Dashboard. 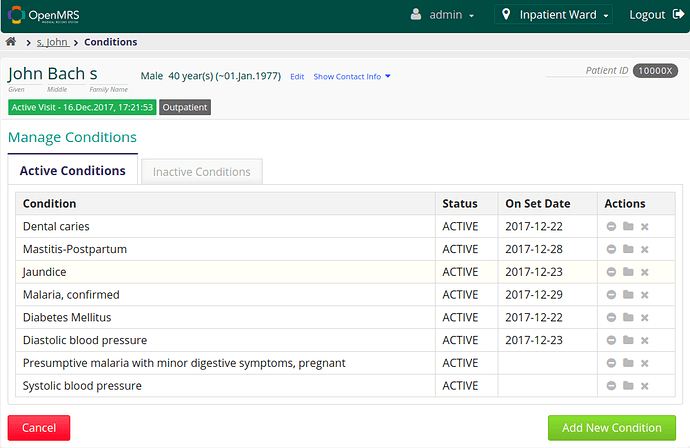 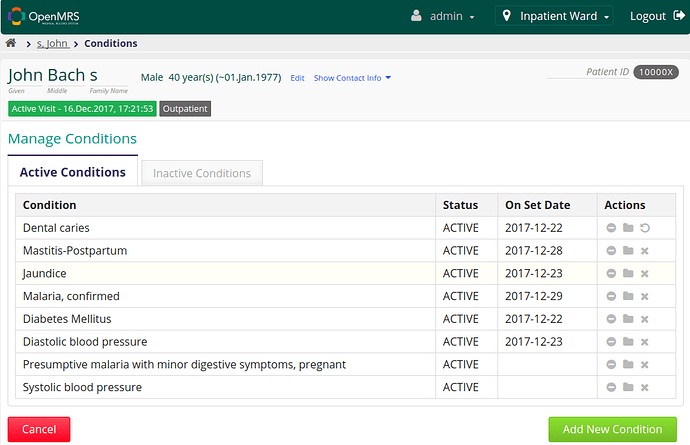 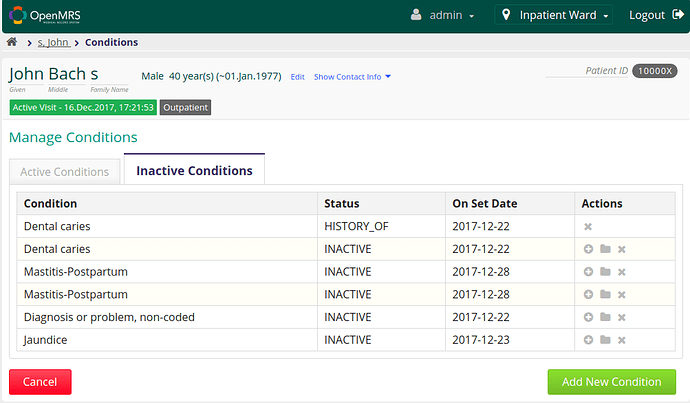 Shows only the active conditions. It doesn’t yet have ability to remove conditions from the list. 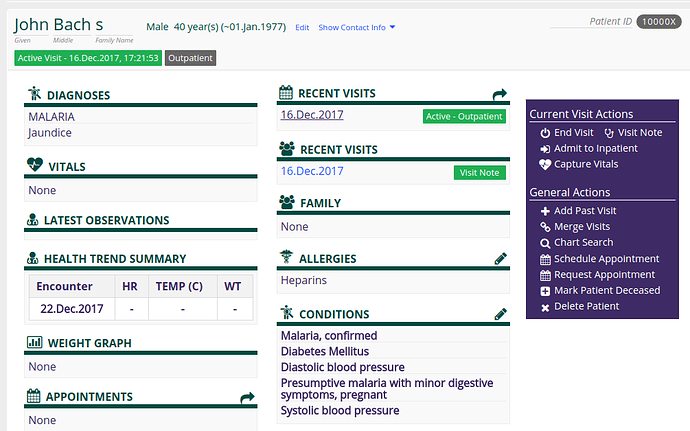 Looking forward to your feedback!

Nice! Though, it would be nice for the row to appear “deleted” and the other actions to disappear as soon as the “x” was clicked:

If you get bored, an equally awesome addition would be to allow editing (i.e., removal of entries from) the condition list directly on the dashboard – i.e., a little “x” following each entry that, when clicked, strikes out the item and provides an undo option until the page is refreshed:

This would allow a provider (someone with privileges to manage the condition list) the ability to remove a condition (like “Diastolic blood pressure”) from the list with a single tap. Given that the #1 complaint and reason for entropy of condition lists over time is the inability to easily prune items for the list, such a feature would lower the barrier to condition list management about as low as possible. 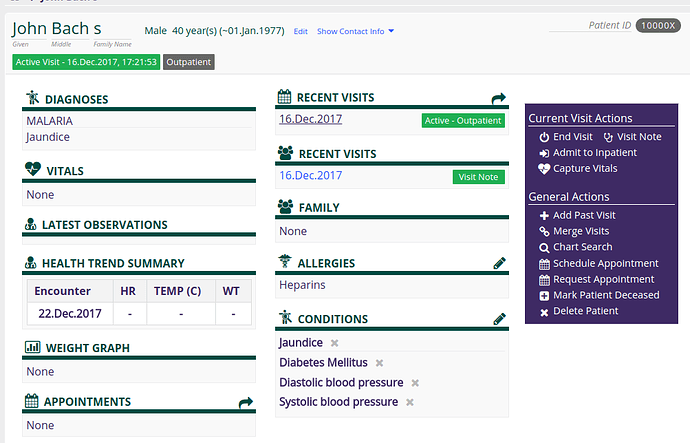 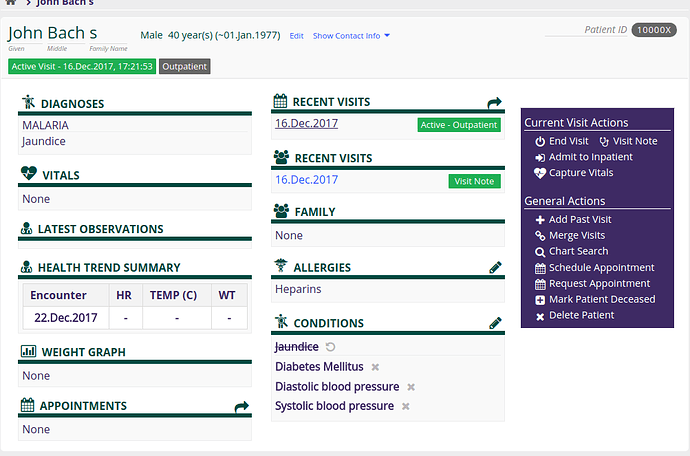 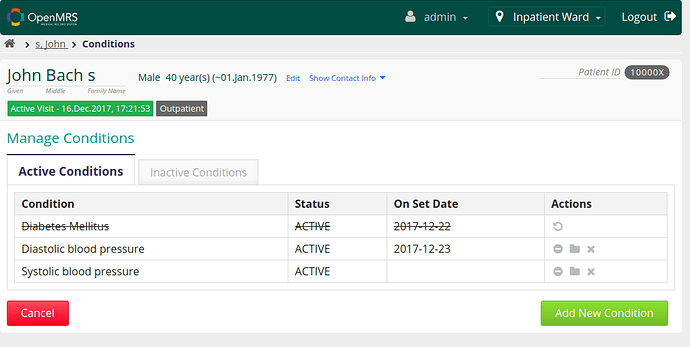 Awesome! This is looking like a viable replacement for the diagnoses widget!

Just wanted to say thank you to @insiderish and others for all the hard work on this, and to continuing to work on it post-hackathon!

We are currently in the process of upgrading our implementations to OpenMRS 1.11, at which point we plan to try this out.