Metadata sharing nolonger on the mdsbuilder

This is what i see; 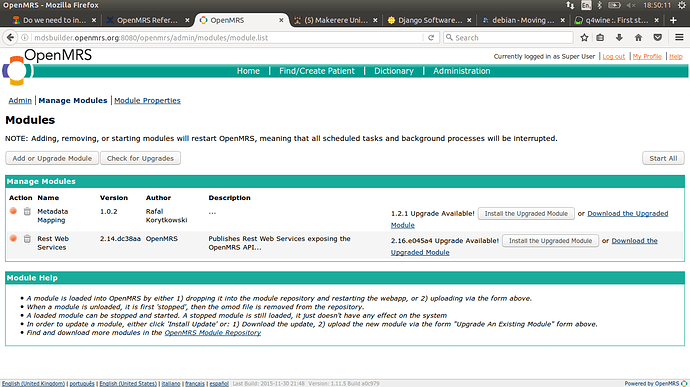 so where do i find the Reference application concepts and other concepts like mentioned in the guidelines above?

@taremwatadeo i wanted to install it from the web but it crashed. So i tried to restart tomcat which i failed because i do not have root privileges. May be @burke can help.

I have restarted the mdsbuilder server. Let me know if I should reinstall the mds package.

It has a startup error which would require looking at the logs.

@dkayiwa - You have permissions now.

catalina.out shows only this error: 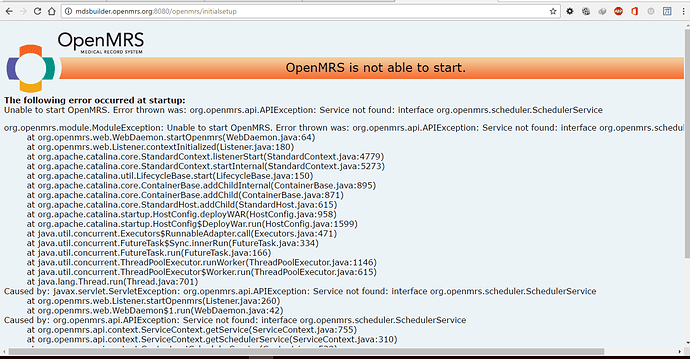 Thanks again @ball for giving me the required permissions!

@taremwatadeo the server is now up and running.

Does anyone know where the reference application MDS packages, that used to be on this server, are?

I usually try to keep this server running and with the latest CIEL dictionary. At some point (many months ago), new OpenMRS software appears to be automatically deployed on this server which doesn’t always work with the mds and metadata sharing packages. I have fiddled around the in the past. Not sure who should be maintaining and keeping his running.

I do use this server to create mds packages from CIEL for the PIH “golden” concept server and github code source for our implementations.

Did this database get nuked in June? Ellen, do you remember anything about that?

(I can’t find anything relevant on talk, or in my skype or email history.)

I usually try to keep this server running and with the latest CIEL dictionary.

@taremwatadeo we would need to update the metadatasharing module with MDS packages downloaded from the updated mdsbuilder server. So @ball’s keeping the server updated, cater for only step 1 of the reference application release process. We need to take care of step 2 and the rest. Does this make things clearer?

yes its clearer @dkayiwa but then this leaves me stuck , since i cannot see any of the concepts (packages) to be updated

@taremwatadeo yes you are correct, we need to look into this.

Am trying to avoid having to recreate these packages. @raff, @ball, or any one else, do you have tips?

Thanks for fixing, @dkayiwa. You are wonderful.

I tested with creating/exporting one mds package with one concept. I supposed the rules for OpenMRS 2.0 or MDS does not allow for concepts without a description in the preferred locale? There are many CIEL (and PIH) concepts which will hit this problem.

Sounds like there are some other glitches with this process. What are the other problems?

@ball would temporarily setting the value of the global property named “validation.disable” help you with the problem of concepts without descriptions?

As for other glitches, am not aware of any, for now.

Do you know of any trick which will save us from having to recreate, from scratch, the metadata sharing packages that used to be on this server?

Do we know when the packages disappeared? Where are the mds packages stored on an OpenMRS server? At a certain point, the .OpenMRS directory moved from the usual place (~tomcat7/.OpenMRS) to /var/lib/OpenMRS. I haven’t followed the timing of this with the OpenMRS version or settings.

I took a sqldump backup of the database on October 10 (before sourcing the new CIEL dictionary). Would that help?

Someone wiped this OpenMRS installation at some point before June 21. I don’t have any insight into why or who. (Maybe it was tied to this, or tied to getting to Platform 2.0?) In any case this is bad, because this was supposed to be our server of record for metadata that we include in the reference application.

Poking around, the only relevant database dump I see is in Rafal’s home directory openmrs_db_20160412.sql which we might consider restoring. (Ellen has a dump from October, but I’m guessing these packages were deleted before that.)

@raff, what do you think is the best way to reconstruct the MDS packages we had on this machine? It seems like we are using 7 packages, as defined here, and I think they’re probably small, since we’re not including concepts.

One option (tedious, but doable) is (1) import all MDS packages that are in the referencemetadata module, to get the metadata onto this server; (2) look at the header.xml in each of the zip files, and manually create new packages having the relevant items, (3) manually edit the records created in the metadatasharing_exported_packages table so they have the right UUIDs and versions.

Another idea is to stop using metadata sharing for all these things, and instead use the metadatadeploy module. I wouldn’t have prioritized making this change, but if we already have to do tedious work to recover, this would be a better use of time.

(@raff, @dkayiwa, @wyclif, @ball, someone experienced like you is going to have to lead this, it’s not something we can expect @taremwatadeo to do in his first time as release manager! Who can commit to doing this?)

Aside: I have changed the admin user’s password to something none of us will remember, to force people to use their own accounts to do things on this server. We want the metadata that people created on this server to be traceable…

I can’t log in either so please someone with privileges create an OpenMRS account for me on mdsbuilder.

I think I took the “openmrs_db_20160412.sql” backup before doing upgrades to openmrs-core 1.11.5 and mds 1.2 (I will double check that), which both went fine and we were able to do the RA 2.4 release… Maybe something with the Platform 2.0 upgrade went wrong? I can’t recall working on that though so I have no insights.

Did we add any metadata for RA 2.5, which wasn’t in RA 2.4? I think no, but I want to confirm with you. Using that backup and upgrading to the latest CIEL will be enough in such a case.

In particular @ball did you add any metadata to mdsbuilder other than upgrading CIEL after April 12th 2016, which you would like to backup? Could you please send me your backup from October so I can diff it with mine from April?