How can RefApp 2.3.1 use Spanish language by default?

I am able to temporarily switch the version 1 interface from Spanish to English. However, when I navigate away from the old interface to the new, the language switches back to English.

I just added documentation for how to change your language at https://wiki.openmrs.org/x/BANGBQ#ReferenceApplication2.3-Multilingual

When you do this you’ll see that the translations are very incomplete. Contributions are welcome at https://wiki.openmrs.org/x/bYNtBQ

Thank you @darius for you help.

I actually tried that route already and it did not work.

At one point, the OK button did translate to “Acceptar” but then it returned to “OK”

Is that what you mean by a “very incomplete” translation?

@themoonraker13 Thanks for your contribution.

Your experience sounds almost identical to mine.

Except that when I change the language on the footer, it only remains translated while I am on that page. As soon as I navigate away, the language returns to English.

CIEL is also interested in helping share properties files to assist with UI translation. If you have content or contributions there are files in github as well. Be sure you change your user language preference as perhaps this is overwriting the temporary change you are making in the UI.

Hmm, I went ahead and followed the instructions that I had written, and I agree that things seem to be completely broken (particularly, the “default locale” is not applied when you log into the Reference Application).

I had already written a ticket about improving the usability of this:

RA-995 Simplify letting a user choose their own language

Now I have added another ticket about fixing the bug:

RA-997 Having a user set a language is broken

Both of these tickets are good introductory tickets for any developer.

It could be that the French translation is more complete that the Spanish.

As you can see, part of the legacy UI is translated when I click “Español” on the footer 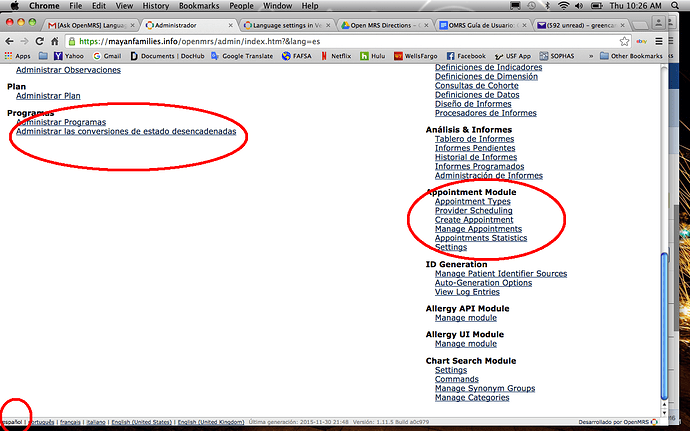 However, when I click “Home,” none of it is translated into Spanish: 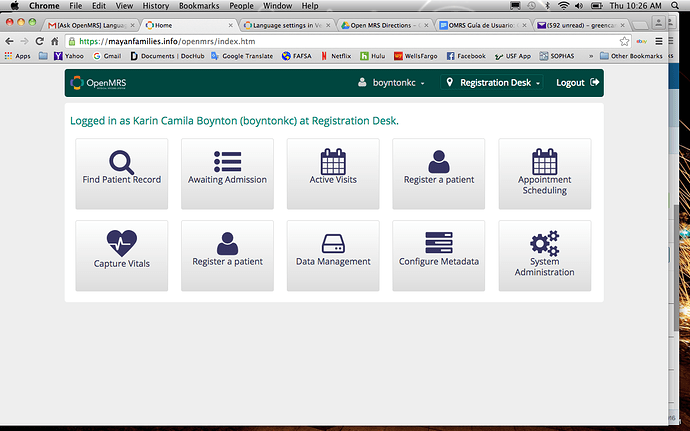 I am currently looking into the Transifex option

It looks like some of the modules still need to be translated, while others need to be revised.

Once these are done, the developed can manually pull them into the module

@boyntonkc you’re a step ahead of me, I was just about to send you that link.

However looking at transifex it seems that the translation is 100% complete. I wonder if this was completed after the Reference Application 2.3 release, and that’s why they aren’t included (yet).

It appears that the “Main Core App” is only 74% translated.

I am not sure, but my programmer and I think that may be the main issue.

Im currently trying to figure out how I can push this project through. Im not sure if they need more translations or more revisions…

A lot of translations in Transifex still need to pulled in to the appropriate modules.

For example, In the Reference Application module, the Spanish translations are 100% done in Transifex, but a Spanish messages file has never been configured in the module itself, so none of the Spanish translations have been pulled into this module. I noticed this for several modules when pulling in translations recently. I set up things properly for the modules I was updating, but the Reference Application module wasn’t one of them–I had a “to do” to send an email to Talk about this, but this thread beat me to it…

I’ve added a section to the OpenMRS Transifex docs, “Adding a New Language to a Module”:

For developers, I have also created a ticket about automatically pulling translations in from Transifex:

Is this going to be the main way that folks customize their UI? By doing builds which automatically bring in the properties files? Or do we need a content distribution method similar to what we do with concept tables to allow existing users to update their properties files?

Is this going to be the main way that folks customize their UI?

No. What we’re talking about here is that module developers and maintainers need to take a few steps to start having their modules incorporate the translations that community members are being kind enough to do in the Transifex tool.

Can someone guide me on fixing the issue as in my case I observe 0% change in language on changing default locale from user options. Or direct me to the part of code working on the internationalization logic.

RA-997 Having a user set a language is broken

Thanks @darius. The issue link and the links mentioned in the issue helped me figure out the solution to the problem.

The fix allows user to change his/her default language/locale and the changes are effective once the user does a logout followed by login.

I’m still thinking for the language changes to take effect instantly without forcing the user to perform a re-login.

I created a ticket for that earlier in this thread. See:

RA-995 Simplify letting a user choose their own language