I have a few forms I’m using in an OWA that I will like for them to appear in the backend as html forms after been submitted. Below is an example of such forms

When the user submits that, a REST call is made to /hivtestresult which adds an entry to the hiv_test_result table. I want to be able to access this submitted data like all submitted data done through the html form entry module. What OpenMRS tables do I need to modify to achieve this. I know every form submission creates an obs for all the fields in the form but I’m not sure if just creating obs will do the trick.

and when saving my resouce, I create an encounter which is attached to my previously created html form. An obs that is linked the encounter. Save both encounter and obs. And on visiting the patient dashboard from legacyui, I could see my submitted data as though It was done using the html form created with the form entry module.

Below is the form replica in my webapp 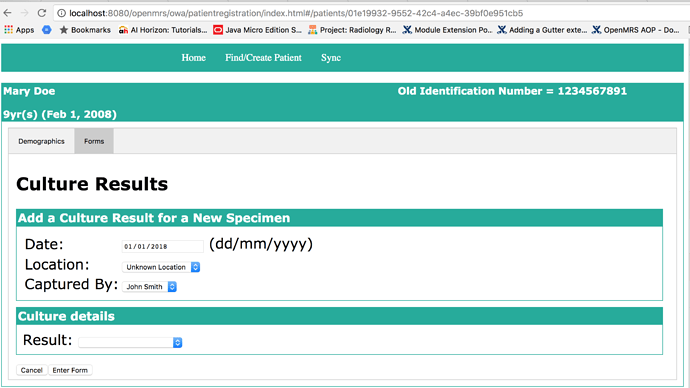 And on the backend, I created an encounter and obs linked to my html form using

Viewing the entry works too

Thanks @ivange94 for sharing the so nicely detailed solution. It will be a very valuable resource to whoever gets the same challenge and lands on this post.

@ivange94, just something that crossed my mind.

@piyush9620 Note: offline is not within the scope of the GSoC project. To get offline working, I had to be able manipulate HTML forms via REST that is why I added this link on the GSoC project page resources. It’s so you see how I used REST with HFE but not that the project involves handling form submissions offline.

it is just an idea so that someone in the near future can make use of it, if they come across a problem similar to this thread and if they find it worthy. nothing to do with the GSOC project.

FYI, I did not understand the point.

i read above that you needed to be able to submit data via html forms even when offline. i see that how the problem is currently handled is via creating a rest endpoint which is used to sync the data later when online. i understand that the HTML form REST project can help with the same.

But i just had an idea to store the serialized forms when offline and later mimic the process of form submission which would eliminate the need of a separate REST endpoint for each form, and you could sync data from all the offline forms directly and all will be taken care of by HFE module as it is always.

basically i suggest also storing the complete “HTML form” in its serialized form locally. what i believe currenlty done is, when we are offline, we are parsing the HTML form then and there itself, and storing all the data from that form locally but not storing the whole serialized html form itself. Storing the whole serialized form will help us create a pseudo form submit action later when we are online. this pseudo form submit will help us submit the forms as usual.

Well you just stated the problem. Not a solution.

i am sorry if i couldn’t make myself clear. @ivange94 i just edited my above comment. plz let me know if it is not clear.

when we are offline, we are parsing the HTML form

No form parsing is happening. When you make a request to save a form, a JSON is sent to the server. If the server is unavailable, this json is stored in the browser and when the server comes back online, the request is made using this json as the data.

TBH, I don’t know what you mean by this. Who does the serialization and how?

Your edit got me more confused.

Have you worked with the openmrs HFE and know how forms are been saved? When you talk of serializing the form is that done by the browser? Plus an html form is not an object, how do you intend to do the serialization and where do you save this serialized form?

This can definitely be solved without using REST. I just don’t get the picture you are trying to paint.

Please see the first answer here, it is a very good example.

serializing and submitting a form with jQuery POST and php

Here is the code from the link above.

Here we are submitting the form using an ajax call and the data that we send is the serialized form. So i figured, if we are offline, what we could do on form submissions is just store the serialized version of the form in an array in javascript in the browser. later when are online, we could create such ajax calls having data from the array (which contain serialized forms which we stored) one after the other to mimic form submissions.