I understand that Bahmni has a time-critical need to implement Episodes of Care, and that eSaude (Mozambique) also has a strong need for this feature (a bit less urgently), and is thinking about the design now to work on in the coming months. And both groups would intend that whatever they implement gets adopted in OpenMRS core.

Jan and I spoke, and it seems like it should be possible to coordinate this effectively (though we haven’t spoken directly with the people who will be doing the actual work, so please say whether this seems feasible or not given real-world constraints)…

Basically, it seems at first glance like this can be built in a way that takes no extra work from anyone, and gets it ready for openmrs-core even sooner. So let me know what you all think about this.

Whoever starts coding first will drive the work

Hopefully, the use cases across the groups and individuals who are interested will be the actual drivers of the work!

Hi Darius, Thanks for bringing this up. We would love to coordinate on the effort and get it done. Currently we are on a very strict schedule and we want this feature (not a full blown one though) for our next release of Bahmni which is scheduled on March 03, 2016. We will definitely collaborate on this once we have the minimal functionality that we have for our usecase. We will keep you posted on our status in next few days on how this is implemented and how do we take it from there. Thank you.

Important thread here. I missed the Jan. 27 call but the notes look good. Perhaps after Bahmni finishes the current urgent job we can get together again and see if anything needs tweaking / what else is needed to have a consistent structure.

Hi @bharatak - is there a document somewhere that talks about your use case and the approach you’re taking? We’d like to see if it aligns with the work we are doing in Moz so that we aren’t duplicating efforts here.

Hi We are still in the process of spiking and initial analysis. We will share our inputs in a week or two.

This is a critical clinical use case and functionality. I agree with Jonathan’s perspective about the need for a consistent structure in this topic area ( as it will impact care plans and other future clinical work). Will be good to look at the analysis.

Apologies for being really late on this thread. We had not separated this out into a different module when we started, and pressures of delivery pushed the separation out quite a bit.

A first version of episodes of care is currently available here. We can discuss further on how to take this forward. Please take a look. We are open to suggestions, and are interested in collaborating to create a generic solution for broader use cases.

Hi @vinay - thanks for sharing this. Is there documentation around what the module is doing? For example, can you share the use case that you built it upon, functional and technical specs, the data model that is implemented, or etc? Thanks!

Peeking at the code I see the model is that an Episode is a grouper that may point to (some of) a patient’s encounters and program enrollments. It looks like:

I guess this is used in the endTB system to capture the fact that a single patient might have multiple treatments over time, right? Can you elaborate (a bit) on this use case? (And, how does this tie to program enrollments? Offhand I can’t think of a use case for having multiple program enrollments for a single episode.)

Perhaps we should schedule to discuss this on some future design call?

The first usecase we implemented was in the endTB system for MDR-TB treatment. When a patient gets enrolled to a TB treatment program, we create an episode for the patient. All further encounters created in this program context are then linked to this encounter. This helps us view all encounters that are tied to an episode.

As @darius mentioned, we designed episodes to be a loose grouping of both encounters and program enrollments (close to the proposed design, but with some differences). We currently do not have a need to have multiple program enrollments tied to the same episode. One usecase of multiple program enrollments could be for a child with stunted growth enrolled in a regular mid-day meal program and an intensive nutrition program (both managed by different groups, but observations made in both are relevant to a provider). Or just two bouts of enrollment to the same time-bound program, when the first one was not sufficient.

We can discuss on a future design call if others are interested. 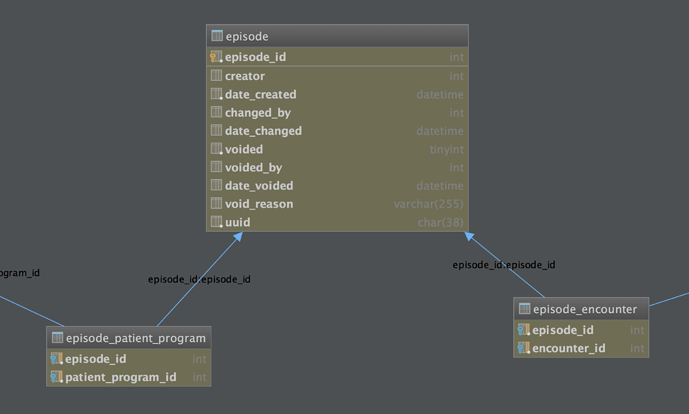 Like @darius, I pictured episodes as having a “subject” – i.e., the “topic” for the episode… is this an episode about pregnancy? an episode of TB treatment? etc.). Currently, the obvious candidates for the subject of an episode are (1) a condition and (2) a program.

Looking at FHIR’s EpisodeOfCare, they actually allow for multiple (1…∞) conditions for an episode (which we should support). So, it would make sense to allow an episode to reference multiple programs too.

For both conditions and programs, the relationship would be many-to-many. So, the service method

could return multiple Episodes, so should probably be:

I’d still like to eventually be able to link an episode to a visit instead of having to link to every encounter in the visit. FHIR already does this, since they use their Encounter to represent both visits and encounters. We could do this by adding Set<Visit> visits as a property on Episode and adding a convenience method like boolean isEncounterInEpisode(Encounter) that would return true if the episode is linked directly to the given encounter or linked indirectly through a visit that contains that encounter.

The changes make sense. @jthomas Shall we have a design call to take this forward?

Hi @vinay there is space on Wednesday, May 11 (6-7pm UTC) or Monday, May 16 (4-5pm UTC) for design forum discussion. Would one of these dates/times work for you? Are there others you would like to make sure attend this discussion?

Since @vinay is in India, I would think it needs to be a Monday call, not a Wednesday one.

Thank @darius I’ll wait to see if May 16th works for him.

(I clicked send too early on that last one)

@jthomas, this call also needs to have @burke, @janflowers, and perhaps the appropriate person from eSaude (Jan can say who)