I’ve been looking into working on FM2-476 which about adding support of searching MedicationRequests based on status.

The OpenMRS data model has limited support for statuses in comparison with FHIR:

Plus “maybe” UNKNOWN which is just implied at the translation layer.

FHIR on the other hand supports:

I’ve also peeked on FM2-480 which I suppose is about expanding the OMRS data model to support for the rest of the supported statuses by FHIR. Now considering our project goals for an MVP, we just need to support “Active”, “Complete”, “Cancelled” & “Returned” which can be achieved with the current data model except for “Returned” which isn’t a primitive status. That being said, for the MVP we are able work with the current data model in regards to MedicationRequest statuses. (Incase of any objections, kindly share)

I assumed that it’s simple as listing all orders within an encounter that have status with value “COMPLETE”. Quoting @mseaton from: [O3-1213] Add support for "complete" status for a group of orders (Client side) - OpenMRS Issues

For this ticket, the dispensing app should indicate that a particular Order is COMPLETED if all associated Orders have a status of “COMPLETED”. This should be written in such a way to support easily changing this business logic across the entire dispensing app, and for easily adding business logic around other statuses as need, supporting notions like “PARTIALLY COMPLETED” in the future, etc.

By associated orders you meant the Order.previousOrder tree? Or there is more to that including the Order.orderGroup?

Any objections or comments on the above?

I’d like to hear what @burke and @ibacher have to say, and this might be worth spending some time discussing on a TAC or Platform call to go through in detail. The ticket you mentioned above - [FM2-480] Support expansion of Medication Request statuses - OpenMRS Issues - is really what this thread is trying to flesh out - how can we map the OpenMRS data model to each of the supported FHIR Medication Request Statuses.

The OpenMRS data model has limited support for statuses in comparison with FHIR:

Plus “maybe” UNKNOWN which is just implied at the translation layer.

By associated orders you meant the Order.previousOrder tree? Or there is more to that including the Order.orderGroup?

Not really. What this is talking about is a different type of status - a “prescription” status, which is more of a dispensing construct. On the dispensing UI, each of the rows represents a “prescription”, which is “all of the orders placed in a given encounter”. These may belong to an order group, but often/usually do not. In such a model, each individual order will have a status, and then the aggregation of these statuses will determine the overall “prescription” status. So we should not conflate the “status” field in the dispensing UI with the notion of an individual order status.

Overall, we need to identify 2 things:

That’s probably a good idea. There’s kind of a fundamental mismatch between FHIR’s model of how we track order status and OpenMRS’s.

From a pure-FHIR perspective, a MedicationRequest is just that: a request for a medication. As part of processing that request, a FHIR server might create one or more FHIR Tasks to track what’s actually happening with the request. That Task would track what happens with the request from the perspective of the fulfiller (likely resulting in a MedicationDispense resource). Once the MedicationDispense is completed (or stopped or declined) an appropriate update might happen to the MedicationRequest—depending on business logic.

In OpenMRS, we have various mechanisms to determine the status of an order (some combination of the Action, dateActivated, autoExpireDate, dateStopped, etc.) as well as the FulfillerStatus which is actually something different from FHIR’s concept of status for a MedicationRequest.

OpenMRS orders includes all types of orders, including drugs orders, test orders, referral orders, etc. which align with FHIR’s MedicationRequest (drug orders) and ServiceRequest (everything else). When it comes to determining the status of an order, there’s a distinction between the state of the request (the order itself) and the state of the fulfillment of that request (e.g., result(s) for a lab test or dispensing events for a drug order).

I believe the statuses of RECEIVED, IN_PROGRESS, and EXCEPTION were created for lab workflows – i.e., to try to summarize the fulfillment of a lab test… which it is called a FulfillerStatus. Typically, labs report on the status of results (our Observations), which follow FHIR’s Observation statuses:

This can be tricky, because a single order for a test can result in many results (observations) and each can have it’s own status. For example, ordering a Complete blood count might return a dozen results and one (e.g., Platelets) might still be in progress while the others have been resulted (final). I believe the OpenMRS Order.fulfillerStatus is an attempt to summarize the state of all observations connected to the test order and does not apply to drug orders. Whether you tried to summarize the state of administration or dispensing events, it won’t make sense in many cases, because drug orders can have multiple refills or be chronic drugs (where a single dispense event… even the “final” dispense event doesn’t mean the patient’s HIV or hypertension prescription is “completed”; these lifelong prescription are only completed when the patient dies or we discover a cure).

For orders in OpenMRS, we currently report isActive(), isDiscontinuedRightNow(), and isExpired(), but I don’t believe we have a separate property for the order status. Note, this is not the FulfillerStatus per @mseaton’s comments and mine above.

FWIW, I started thinking through how we would use statuses for drug orders before I really understood the questions in this thread. I didn’t want to just delete the table, so here it is: 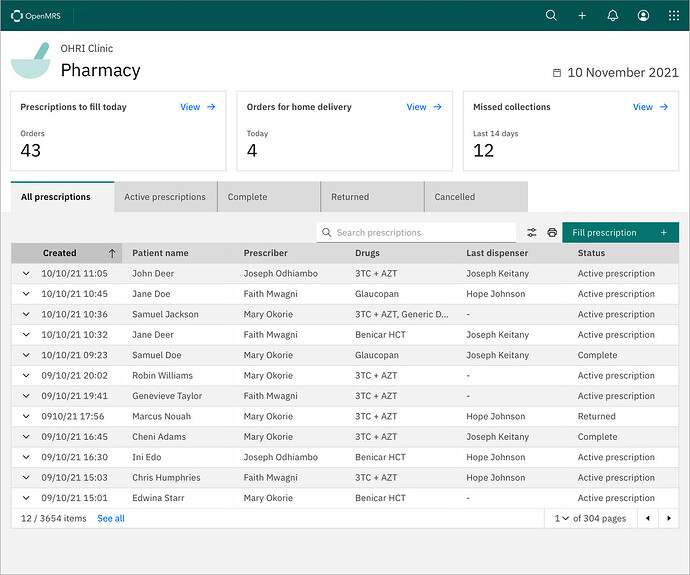 Especially the Status column there. It seems like “Active prescription” and “Complete” can be well-represented by the MedicationRequest.status field, but I’m not sure about how we would represent “Returned”. Have I got this right? @burke do you have any thoughts on that?

Hello all… sorry, just seeing this now (and this may have been what was discussed on the TAC call a couple weeks ago), after I already updated the ticket with some potential new mappings:

Luckily, I think this lines up closely with what @burke mentioned in the above post.

Per the “Returned” status that @ibacher asked about, I think we need to continue to flesh that out, but I also think we’ve determined that the “return to prescriber” functionality is not MVP for Dispensing app, so I think we have also move forward with a “Phase 1” before figuring this out.