We want to acknowledge Moses’ work and commitment to the OpenMRS community, so we asked him a few questions about himself and the different ways he is involved in our community. 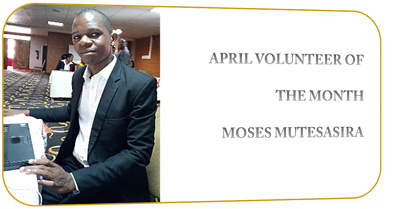 Tell us a little about your background

My name is Mutesasira Moses from Uganda, a graduate with a Bachelor’s degree in Industrial Engineering and Management. I went through Kyambogo University in Uganda for my degree. I love learning new things, willing to practice what I have learnt. I am currently volunteering with OpenMRS.

When did you start with OpenMRS

After my Degree from campus in 2016, I first worked as a CAD(Computer Aided Design) Engineer and it’s from here where i met a friend @k.joseph

In 2016 who introduced me to OpenMRS as an organization that distributes open source medical record system. I did not join this awesome community instantly at that time ,because i had little and very limited knowledge about programming as a whole ,since at university i had been just introduced to programing . From then i began to read books about java programming ,and developed a few projects so that i could familiarize myself with programming and also prepare myself to join the community.

I was able to join the community in mid 2017 and was warmly welcomed by community members especially @dkayiwa and @jwnasambu After joining, I began familiarizing myself with the community resources which include Wiki, Talk, JIRA and GitHub.

To get a basic understanding about the OpenMRS architecture, i followed the developer manual and developed the Face-list Module(https://wiki.openmrs.org/display/docs/FACE+LIST+MODULE) as a newbie project. it was not really a community priority but it gave me a good understanding about the OpenMRS API. The last three months of 2017, I decided to participate in the Andela BootCamp so that I could improve my programming skills. And after that I came back permanently to the Openmrs community with a better exposure to programming.

How do you participate in the community (What activities, projects, role, etc)

What drives or inspires you to work with OpenMRS

What are your favorite things to do in your free time

My favourite moment on OpenMRS is when i get my Pull Request merged and I get appreciated for the work done.

Congratulations Mozzy! keep it up.

Congrats @mozzy! We’re lucky to have you in the community!

You are awesome @mozzy! We appreciate you so much. Thanks for making a difference in our community!