My name is Yousef Mohamed Hamza I’m working on the iOS client for OpenMRS to extend it’s functionality as part of GSoC program.

Right now we are at the point of finishing up the XForms implementation on the client, But we faced a design decision that we need your input on 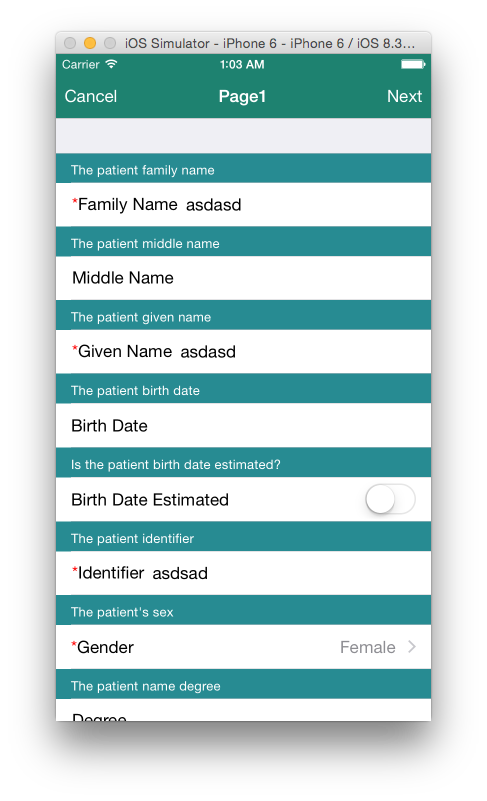 Or as viewed in this video as a step wizard:

Consider the look and usability of both.

Waiting for your input!

In my opinion the step by step wizard is ideal for a Mobile app. ODK is a proven app & i believe they have chosen that method for a some valid point. What do you think @dkayiwa, @burke, @parkererway, @uzanysa ?

From a UX standpoint, I’d say the list-of-fields method is far superior. It allows you to reference and edit what you’ve already entered, without backtracking. Wizards gave their place, but for bulk data entry like this they’re always too cumbersome in my experience. My experience is that a mobile application should only be dumbed down if it activity helps usability to do so.

I’ve implemented both on various projects, and another plus for lists is that they’re much easier to write clean, maintainable code for.

There are a couple stylistic updates I’d probably make to the list, but they’re minor and easy.

How about having one as the default, but with an option to switch to the other? If i remember correctly, for ODK, one can design their forms to behave as either of the two, depending on their preference.

Yeah having both would be a good idea. Thanks @dkayiwa, @parkererway for your valuable feedback. @yousefhamza Lets plan to have both methods while having the Wizard one as the default method.