I’ve created some locations for test purposes (I’m fixing a test case) with the JAVA Rest API. I’d like to clean them and either manually or via a rest call, I can’t delete them (my location are named Location-xxxxxxx), why? Maybe the screenshot helps. Thank you in advance 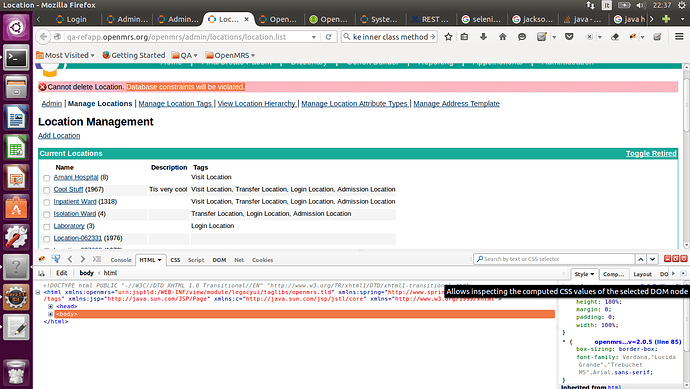 I assume this is because you have created other data (for example an encounter) that references the location.

We generally have not included “force cascading delete” functionality in the UI. (It’s only sometimes implemented in the API.)

@darius, Unfortunately I haven’t created any other data.

Does your location have any tags?

Neither, nothing guys. Look at the following screenshot for details 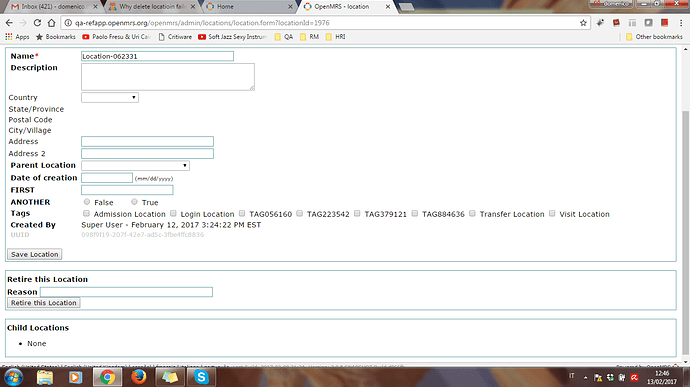 I’d like, I don’t know how to log on the qa-refapp server (I was trying my test against this server).

Can i look at the full REST call details?

sorry for my late delay, I’ve submitted the code that I used to create a location via REST API. The method does nothing extraordinary, it calls the TestLocation class already available in TestBase.java

I’ve used the method in one of the test, actually since I can’t delete the location, I’ve commented it Look at lines 42 - 47 in the following code

RA-904: tests for ManageProviderSchedule have been enabled and significantly refactored

To delete a location, I’ve implemented the permanentDelete method in TestData class, which at least for the resource location fails. Trying to recap:

This is the error which happens at the database level when you try to delete that location: 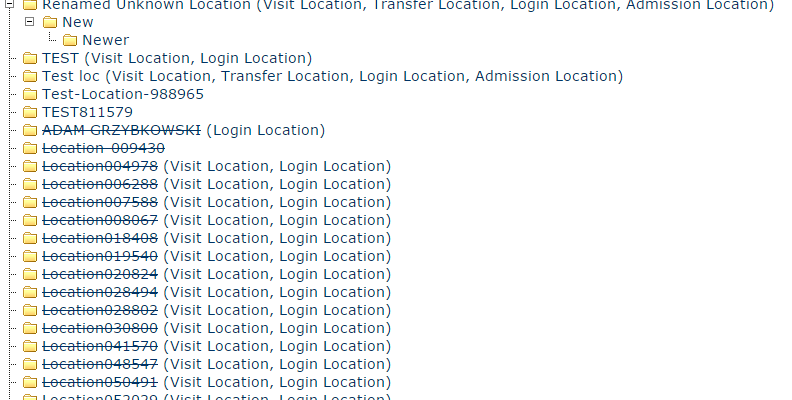 Yes some locations have no appointments and hence are deletable. This particular location has a row in the appointmentscheduling_appointment_block table where the provider_id is NULL, because this column is nullable.

And in turn this row is referenced by two rows in the “appointmentscheduling_block_type_map” table. So it also cannot be deleted until these two are deleted.

I think, I can reproduce the error. Scenario:

Unfortunately the test fails at step 6. My guess is when we delete an appointment, the appointmentscheduling_block_type_map is not updated accordingly, thus we have a sort of “dangling tuple”. Maybe, you can verify my scenario by looking at the database while repeating the test scenario. Additionally we should open an issue, shouldn’t I? if so, I’ll do it later on. Thank you.

I was able to easily reproduce this locally using the steps you described. So yes go ahead and create a ticket. When an appointment is purged, it should delete the relevant rows from their related tables.

I moved it to the appointment module project. Do you wanna work on it?

thank you for your offer to work on the module application, to tell the truth I have experience mostly on testing, in the past I worked as a sw developer, but now I prefer to work on the verification side. Hence, if there are tasks in this specific module project, you can count on me

By the way, pleas can you merge the branch RA-1320 (if my submission is fine with the reviewers) I’d like to fix other things in the openmrs-distro-referenceapplication project during the next days. Thank you

There are a couple things that are going on here:

However, that being said, I don’t think there is any way to currently “purge” an appointment or an appointment block via the UI. We may want to look into adding this functionality.

@mogoodrich you are correct. There is no way to purge from UI. Only thing we can do is to void them. Or else, when user delete location, all related records should be deleted automatically. But according to my knowledge it’s impossible.