Where is my runtime.properties file on Windows 10?

@hossam, this bug was recently committed to the master, but I don’t think has been backported. See issue:

Does that mean that for now, If I switch to windows 7, the problem will be fixed?

Its a 1-line fix, so may be you can do that yourself and build. or you can set an environment variable with name = OPENMRS_APPLICATION_DATA_DIRECTORY with its value = directory where you want the folder like C:\Users\YOURUSERNAME\AppData\Roaming\OpenMRS

then remember to do a system restart, if you created a system env var. If you create a user env var, just restarting tomcat will find the folder/create the folder with the installation able to create runtime properties file

I appreciate that you think I can do that but I just knew OpenMRS existed 3 weeks ago and after that I knew MySQL and Tomcat existed then I had to learn some HTML language and database essentials from scratch.

I’m really sorry. I wish I could do it myself but I’m very overwhelmed as is.

Did you try the environment variable?

no I don’t know what that is

Did you try out the standalone version? https://wiki.openmrs.org/display/docs/OpenMRS+Standalone

would you please kindly help me do that? hw do I set an environment variable? 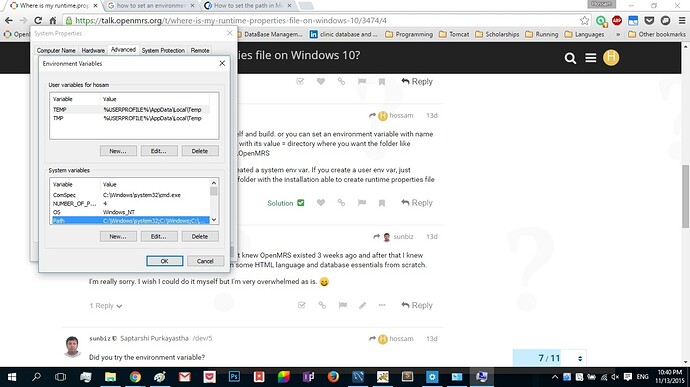 How to set the path in Microsoft Windows

Information on how to set the path and environment variables in Windows 2000, Windows XP, Windows Vista, and Windows 7.

I also tried Platform 1.9.10 war file. Deployed on tomcat 7 and i also got the same problems. Worked on Environment variables as suggested and restarted tomcat but no success. OpenMRS folder is not being created on AppData folder.

What error and at what stage are you getting the error @jkemboi? 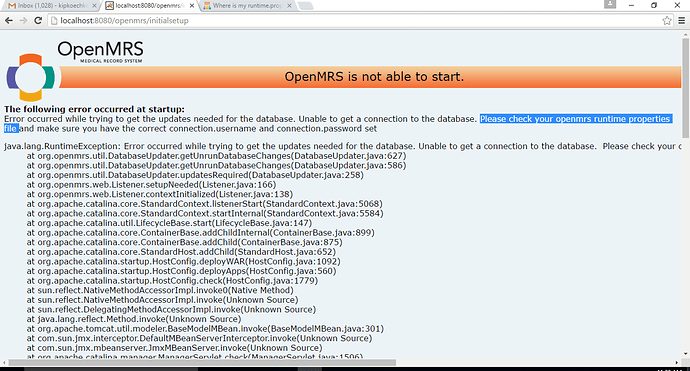 The installation is running on a former created “openmrs-runtime.properties” file open this link… C:\Application Data\OpenMRS Replace C: with the Local Disk Drive you are using. then delete the existing file

@sunbiz I tried with environment variable (windows 10) . But not work.

Openmrs runs on this versions jdk 1.8., msql 5.7 and Tom cat 8. To access your run time properties
On Windows systems: