Where did all of our google drive documents and folders go?

I navigated to Google Drive: Sign-in and was surprised to see that nearly all of our shared google docs have disappeared. From the logs, it appears Ciaran Thomas removed several folders: 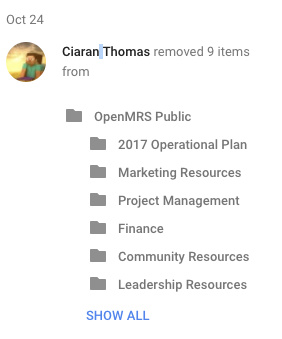 Does anyone know about this? Any chance we can recover the files?

@burke I know nothing about this. Although as the owner of the “OepnMRS Public” folder I wonder if you can not retrieve subfolders. I know I deleted something @maurya created by accident before and he was able to find it but it was not in my trash.

All the files/folders are still there (good news) but we’ll need to reorganize the folders. I’ll do that now.

I’ve restored the drive schema and made Burke the owner of the folders that I had originally created.