I was just noticing that the timing of our reference application releases is wrong, given that we typically have a surge of contributions from GSoC applicants throughout the entire month of March. Here is a graph of commits by week in the first 6 months of 2015: 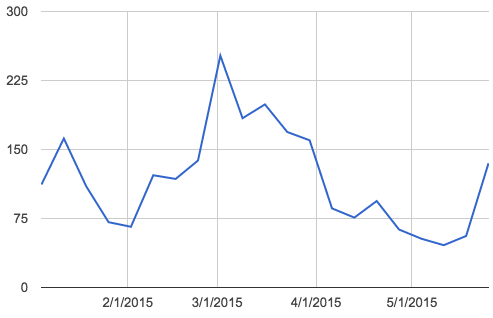 The surge in March is from GSoC applications. Currently, we aim to release the reference application by the end of March, which means that most of the month of march is for testing and “release process”.

Instead we should shift things later by one month, so that GSoC applicants can work on refapp tickets, and that work can be QA’d and released in the next month, and they can see their contributions released quickly.

Thoughts? Am I getting this right? (cc @ssmusoke, @maurya, @burke)

@darius Thanks for the data, I do not see any challenges with moving the release by 1 month to leverage the additional capacity

That would be great!

When we decided on 2014-April-03 to release the Reference Application each March & September, the primary goal was to release at least twice per year. The months were chosen randomly, primarily to ensure we timed a release before our annual implementers meeting, which had been happening in the September-October timeframe.

Given @darius’ argument for leverage GSoC and the fact our implementers meetings are trending toward early December timeframe, moving our release months back a month to April & October makes even more sense.

This is really good idea. With this we can get more contributions from GSoC applicants.