Using Kitematic to set up Bahmni on Windows

kitematic https://docs.docker.com/kitematic/userguide/ seems to be a gui tool for docker is it possible to directly deploy bahmni app via this ui.

That is only for mac…at least last I checked. Also it’s currently super simple using vagrant…

it runs on windows 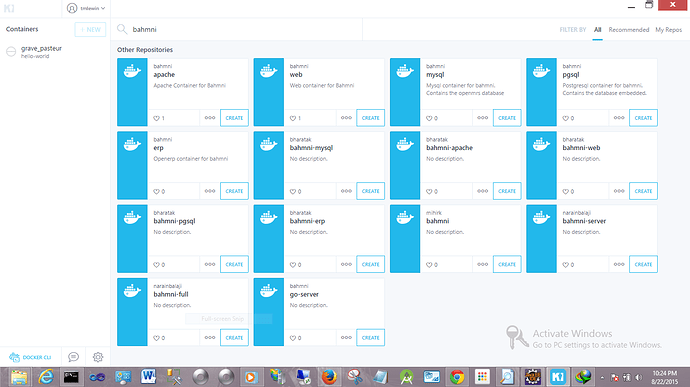 @r0bby , this kitematic is really cool. it works i just got nginx from it it does both setup and deployment of containers. have you tried bahmni with it. i am yet to try get bahmni , but first i would like to seek your professional opinion with regards to it.

oh, it works on windows…

Uses this is probably the easiest route. Install Virtuslbox and Vagrant.

I have invited @bharatak to help since he is directly involved in the Bahmni project. I just happen to be a guy that knows a little bit about docker

@r0bby i did that already but it ran into issues while trying load the centos. this kitematic might be the coolest route for me since it involves a direct gui install .As you said please am really eager to hear from @bharatak .if its confirmed that bahmni(full setup including erp,openelis,openmrs) can be set up using this method(kitematic) , i will gladly proceed with the installation.Thanks for your help as i await you guys thought on the matter.

Hi @tmlewin @r0bby I have worked with Kitematic when it was in its first beta version. We can pull the containers very easily using a gui from Kitematic. i.e. as @tmlewin mentioned starting nginx container is a click of button. One thing that is not available is a way of linking all of the containers. In Bahmni, we have seperate containers for Apache, Web, Mysql, Pgsql & ERP and they work together using container linking. I will try seeing if the latest version facilitates this linking. Will keep you posted on my findings.

@bharatak big thanks for your feedback ,as a side-note , i really hope kitematic can do the trick, this will entirely simplify the process 1000 times easier.Expecting further feed back. Thanks once again for your stead fast support 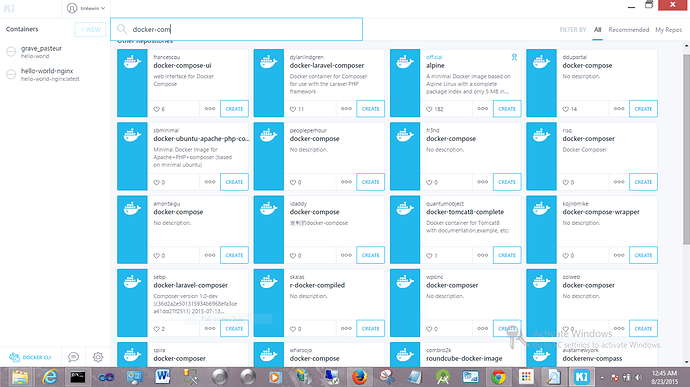 @robby. before all this i setup and configured vagrant on my windows 8 machine, ran the command at command prompt and downloaded centos , but after the download there were issues along the way of installing the cent0s.i decided to try docker and so far it has taken me this far. is there any way i can setup -docker-compose on a windows machine, because without docker-compose , my quest to setting up bahmni is useless. i use a windows machine at the moment. so any help with regards to completing setup with docker on windows would really help me solve this long standing issue