We want to make it possible to use Bahmni Forms in OpenMRS 3.0 using Microfrontends. For this we don’t want to reinvent the wheel, but rather use as much as possible from the existing implementation.

Right now Bahmni Forms is mostly delivered to the frontend using the implementer-interface package. This package depends on bahmni-form-controls, which is the library delivering most of the components.

The bahmni-form-controls implicitly enforces a number of anti-patterns:

We already had a call with @binduak @angshuonline @buvaneswariarun @snehabagri thanks to the help of @mksd - there we introduced the topic and the possible options.

There are three distinct ways of introducing the implementer-interface to microfrontends. Variations of the three ways are possible, too:

All have their pros and cons. While (1) has the most effort, (3) has the greatest technical challenges.

We would favor a variation of (2) where all controls would be placed in bahmni-form-controls and implementer-interface would still just consume these controls from the library. It would thus reduce the creation of a new Bahmni Forms app to wiring together the components exported by bahmni-form-controls.

To be really flexible the styling and some other inner workings would need some adjustments, too.

In total, the previously shown architecture diagram would change to look as follows:

When implementing this architecture the following things would require change:

Consequently, the implementer-interface would change slightly internally, however, remain as-is from the outside. In this setup there are multiple locations for new applications such as the microfrontend app:

Right now there is no recommendation for the location of these applications. For the microfrontend app specifically we would recommend to choose a location that suits the responsible/maintaining team.

As a result, the architecture for supporting the standalone application together with a new microfrontend app would look as follows: 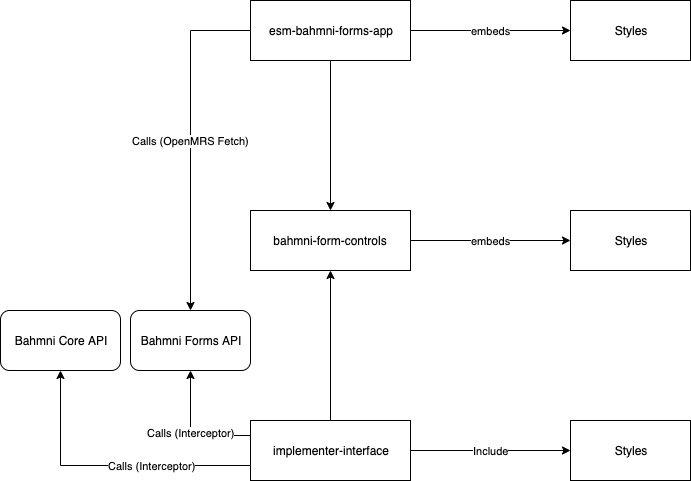 A discussion resulting in next steps and further insights would be greatly appreciated!

Thanks for initiative @florianrappl. However, in the summary above, I think there are few things I would like to correct

I hope these help get you started in the right direction. Happy to get into a call for more explanation.