stand-still with "vagrant up"

trying to download bahmni, I have been following the install instructions but I have been stuck repeatedly on the same line: “C:\bahmni\bahmni-vagrant>vagrant up _” I have tried deleting and redownloading all the programs and folders, but the same thing happens every time. No error or other pops up, it just doen’t start to run.

Please help, I’m at a loss of what to do.

@ntc16, just to check, are you following the Bahmni Virtual Box instructions? And, can you share what versions of Vagrant and VirtualBox you have installed on your computer?

@darius- Yes I am, I’m stuck on “step 4” of the Windows installation instructions. I have installed Vagrant 1.9.7 and VirtualBox 5.1.26 for Windows host

Maybe this will help?

Also try vagrant up with more details - from the above, its practically impossible to figure out whats gone wrong. You can get more info if you do

I tried directly downloading the Vagrant box, however that did not seems to change anything. When I tried “vagrant --debug”, this was the result: 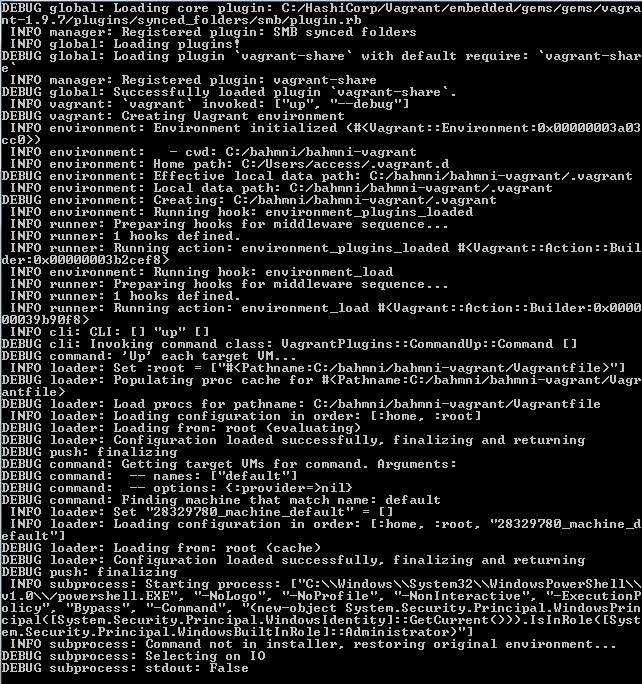 I re-tried “vagrant up”, but nothing changed. I’m currently using Windows 7- could this be related to the issue?

Is that all? From the image its impossible to tell anything about status or error if anything occurred.

If thats not all the output, maybe you can output all the info to a file and upload the file here.

I do not have windows 7, but if you have vagrant version more than 1.9.x then it should be fine. (I hope that you have windows 64 bit).

Please let me know this issue is resolved

Quite possible! You can try allocating lesser resources for the instance. If you are using Virtual Box, then you can try to change allocation from the admin console. You also might have to stop some of the running services (e.g. Lab or ERP) in the Vagrant box.

Quite possible! You can try allocating lesser resources for the instance. If you are using Virtual Box, then you can try to change allocation from the admin console. You also might have to stop some of the running services (e.g. Lab or ERP) in the Vagrant box.

“If you are using Virtual Box, then you can try to change allocation from the admin console. You also might have to stop some of the running services (e.g. Lab or ERP) in the Vagrant box.”

“If you are using Virtual Box, then you can try to change allocation from the admin console. You also might have to stop some of the running services (e.g. Lab or ERP) in the Vagrant box.” [/quote]

Hi, i have cleaned up all the resources which installed earlier and started fresh with sequence

any help answers or help with irc chat appriciated 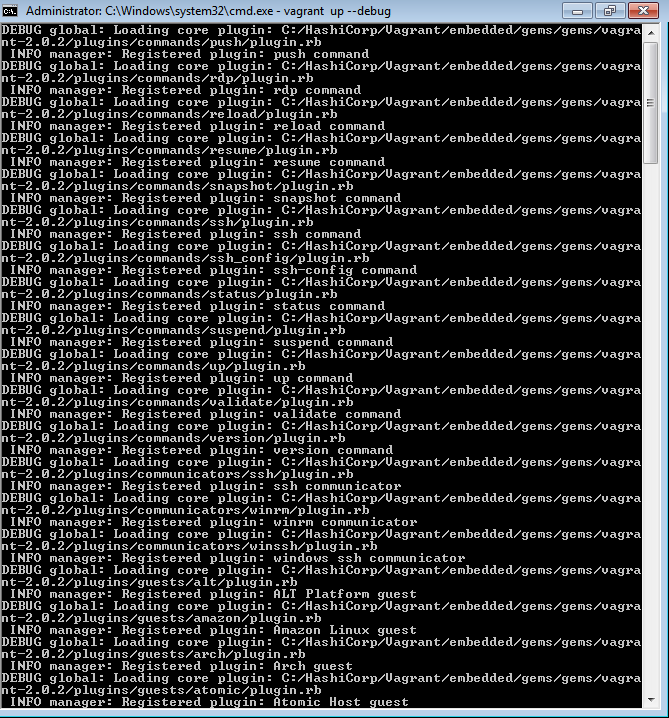 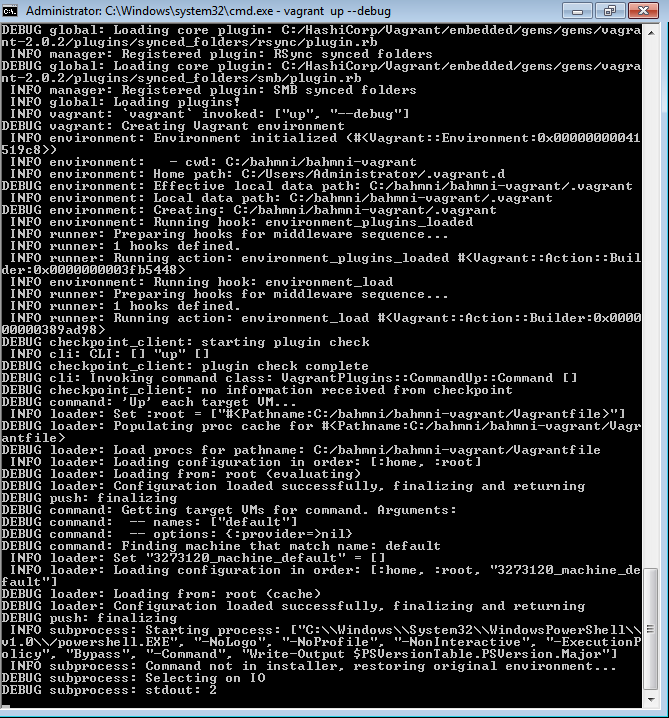 Hi, I don’t see any useful information from the log. Seems these are not the full log.

Debugging and Troubleshooting - Vagrant by HashiCorp

As much as we try to keep Vagrant stable and bug free, it is inevitable that issues will arise and Vagrant will behave in unexpected ways. In these cases, Vagrant has amazing support channels available to assist you.

this is for powershell

Also, have you considered using Docker? From my personal experience, I find Docker to be much more optimized than vagrant for Bahmni.

as per your suggestion i have added this command "vagrant up --debug > c:/bahmni/vagrant_up_debug.txt " but with this file is being generated but the file is empty with size 0 kb no contents in that file it did not work out

when i run the below commands in docker quick start terminal $ cd dev_dockerFiles $ sudo ./docker.sh

says sudo is "bash: sudo : command not found i just tried to say command docker.sh with out sudo it executed and few things download but with some errors with lines in docker.sh with sudo command lines did not execute
container01 downlaoded

created folder bahmni and cloned to get vagrantfile

i am still get stuck when i say vargrant up command even though this time i have 8 GB of RAM it goes for stand still with vagrant up command but i noticed it is creating on blank folder in bahmni-vagrant with name .vagrant

Hi @shridhars, if you are planning to setup Bahmni dev environment, you can either follow Bahmni Virtual Box setup or Bahmni Docker setup. You don’t need to have both. We would recommend Docker over Vagrant/VirtualBox setup as it is light weight and doesn’t eat up much of memory.

do you see any error when you access http://localhost/openmrs ??

Hi bindu, i have started all together in one of the threads i saw a suggestion for create centos 6.x VM in windows machine and use the centos installation steps to install bahmni

i have created centos 6.9 VM in Oracle virtual box and and able to install the bahmni with centos instructions and now am able to access the urls of the bahmni in VM but when i try to connect from host machine windows i am unable to connect to bahmni 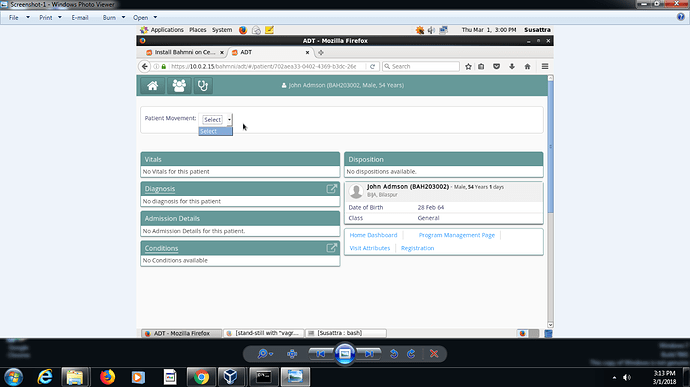 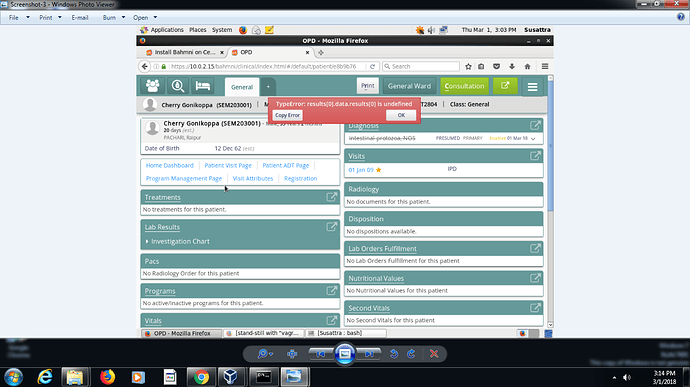 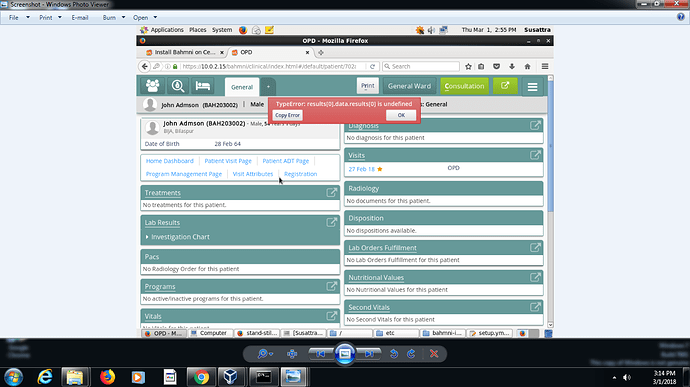 i have restored the databases from the link https://github.com/Bahmni/emr-functional-tests/tree/master/dbdump

It again depends on what type of configuration changes that you want. This wiki page would give an idea of advanced configurations in Bahmni. To get templates and observation forms as similar to demo, restoring with demo database would be enough.