I am wondering how to create new patients from within an HTML Form.

I am wondering, is this possible and if so how has it been done? Is there a workaround to having to register each member of the household on their own as that becomes too tedious.

Our Rwanda team created and use the “patient” htmlform entry tag:

@ssmusoke - You ask so many awesome questions. I love that.

@ball Thank you, well I am learning alot as we strive to improve a complex deployment.

The challenge with the patient tag is that it uses the current patient in the context so cannot be integrated into an existing form say for a parent, to show the members of the household.

How did the Rwanda team use it to create new patients? Is it in popup? Then how is the information linked to the current form being filled?

hi Musoke, …we don’t use the patient tag for creating new patients. We mainly create new patients using the Rwanda Primary Care module and use HTML Forms for adding/editing patient data like encounters, obs,… . I don’t know a workaround to this in your case but I would try to create new persons/patients using the normal openmrs UI and use the relationship tag in HTML Form to create the required relationships.

@ssmusoke i see you creating a ticket for this.

@mogoodrich Do you have any advice on how to approach updating the patient tag to create new patients. High level thoughts:

@ssmusoke, not sure if you saw @rubailly’s post above, but I believe the relationship tag is what was created and is used for the use case you describe.

Will this meet your needs?

@mseaton the relationships tag will not cut it. The use case if for a labor and delivery scenario in the image below, the form being displayed is for the mother, and there is need to register the babies born in a single shot rather than go through the process of registering each one separately. 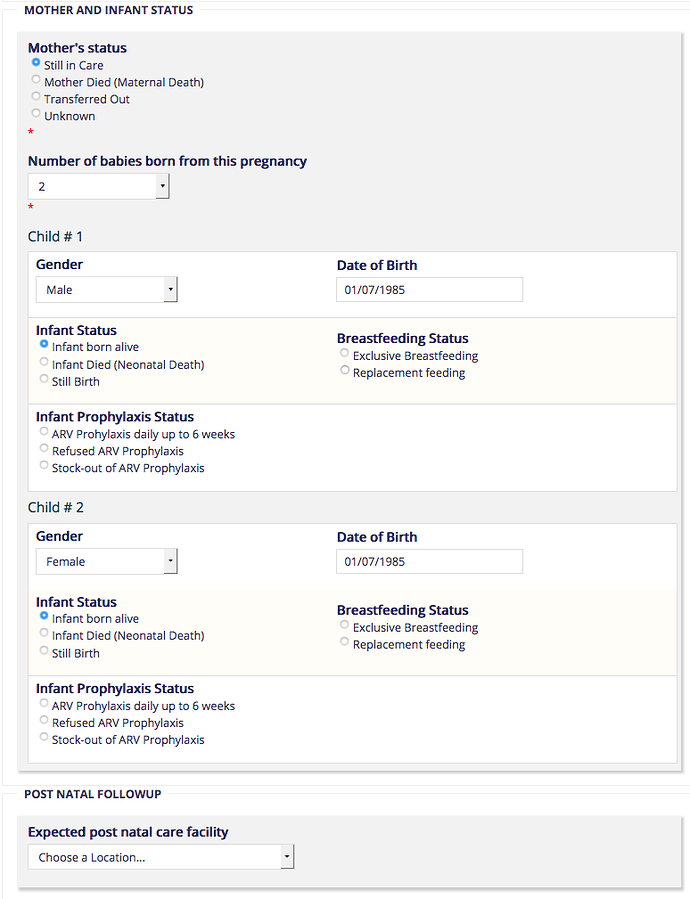 @ssmusoke the “registerPatient” option you lay out seems like a reasonable approach, though I would check to see if the existing “patient” tag could be multi-purposed to do any of this.

For editing, if you could get away without doing editing in the first pass, that would be a good way to simplify things.

@ssmusoke, I see. That would be a useful feature to have. But it definitely gets complicated as you are basically talking about editing the attributes (and potentially even encounters and observations) of multiple patients on the same form.

One approach I might recommend you try would be to:

An additional benefit of this is that you capture and preserve the fidelity of what was entered on this form for these fields, even if the baby’s patient record is later updated (i.e. they would be observations in the mother’s encounter, and then the post submission action would also make them observations or other attributes if desired in the child’s record).

It also means that you could make decisions like “only register a new patient if the infant is born alive” that are embedded in your postSubmissionAction rule. So, if a baby is born alive, create a new record for them in the system. Otherwise, just retain the information as observational history in the mother’s record.

@mseaton Thanks that really looks like a plan, breaking the problem into distinct steps … Will work it out and let you know how it goes

@mseaton FYI I was able to get this working along with unit tests etc, I am trying to find a way to make it generic for others to build upon