Based on a recent design call on Release standardization(Nov 4th, 2015) attended by @wyclif, @dkayiwa and myself, I present a few ideas discussed: This is a continuation to this talk post

Please reply to this topic with your opinion on if you support or do not support the list items below. If you have any better Ideas please do mention them as well.

1.Decide on the Release timeline - Starting with a timeline for the Reference Application - @dkayiwa and @wyclif Agreed Before agreeing to this idea please consider the process, pro’s and con’s for this model of release Process:

Cons: a. Have to change our CI release process to release off of the release branch (Not sure how difficult this is @cintiadr might have more knowledge ) b. Will create an extra step of creating/managing a branch, though it might be of minimal load this can either be taken up by module owners or the release manager. c. If any bug is discovered in the UAT, the fix has to be implemented in both the release and the master branch.

2. Make Release Process information more transparent: Release roadmap Pages for the Platform and the Reference Application created when the release manager is chosen (that will transform into Release pages)

The actual tickets in each module that are being included in the Reference Application or the Platform are not visible for the general public to view in the technical roadmap. Presently - An implementer needs to go to JIRA and search in each Module which ticket is being included. A simple inclusion of Jira Tickets as shown in Getting Started as a Developer Page would be fine.

3. Include Implementers more in the Release Roadmap: Decide the process of getting features/issues into the release roadmap, this will allow implementers and developers to understand the process and have a say in the release

@wyclif - Presently they are decided on a design call / Developer Call. Darius or Burke say this should be in a specific version, if not done in one version they are bumped to the next version. @dkayiwa - Majority of tickets are decided by the release manager and for grey tickets they are talked about in a Design Call @wyclif - Voting has been used for dev swimlane, and we ignored it recently.

There is a voting system available in the JIRA. Select tickets with highest number of votes and showcase them in the release roadmap page.This will make the process more transparent.

This will allow implementers to go to JIRA and vote for the features/issues they are most interested in. @dkayiwa and @wyclif agreed.

4.Decide on a way to communicate with the interested stakeholders: After people voting on a JIRA ticket or mentioning that they are interested to get a feature included in OpenMRS people have not got a proper response about the status of the Features/Issues. To handle this if we have a release roadmap that should solve the problem of knowing the status. But if their issues are not being included the release manager should send out a mail/ Announce in a talk post about why their ticket is not being included or in which release version it would be included.

5. Decide on a way to best showcase download statistics present in sourceforge, they can act as a great metrics - Sourceforge Download statistics - has great data like the number of times each version has been downloaded and their total( 250,000+ total downloads) and how many countries downloaded it (200+ countries and territories) Though this is not something that would interest the implementers it would definitely allow people new to OpenMRS understand its impact.

This is not something to replace the Atlas module information as that is definitely more accurate and a better metric of the impact of OpenMRS implementations. But, OpenMRS is not just used for Implementation, it is used in many different ways, though we do not have a way to know that now we at least know the quantitative impact.

Presently I’m including them as a link in the wiki under releases like here. I’m not sure if that is the best way to showcase it though.

They provide an API to extract the data, may be this can be integrated in the wiki or a metrics module. @dkayiwa - Atlas is the most realistic, but we need both

6.Platform Release Process Improvements @wyclif - Most of the process included in this release process page can be automated through bamboo and the documentation would shrink but we need approval from the community.

7.OpenMRS 2.0 should not be used for Platform 2.0 as it creates an issue with Reference application 2.0:

@wyclif pointed out that OpenMRS 2.0 has already been used for OpenMRS Reference Application 2.0 in JIRA , Having the same name for Platform will be confusing. Maybe having Platform 2.0 would make more sense.

I hope the code freeze in mid January is not on both openmrs core/release branch and to be included modules!

I appreciate making the release process more automated, however as a starting release manager i more so appreciate it if am mentored through the manual release processes such that when i meet with organisations that are not automating it, i have no drawbacks to do it myself.

thanks for the work on this. i have a few comments.

thanks for the time/ reflection/ input into these ideas. amazing. terry

Great! Thanks for the replies @k_joseph and @terry

@k_joseph yes it is only for the modules, there should be some other timeline for the platform. And though it is good to learn the whole process, It might soon become automated everywhere

@terry, Thanks a lot for taking the time to post a reply for each of the point mentioned. To clear a few questions you asked:

thanks Maurya. Jan has been working on this so i think that she will love to help. if we are going to do number 3 manually, should we set up some spreadsheet mechanism to track and review. if you can get the data for 4, that would be great. i would like to include that in the annual report. can you also present that data/ have that data for the summit? we should figure out something more than just downloads ( for instance, impact) but i am not clear how to do that yet. 6. should we do a session at the summit , asking for input? 7. would be great to reorder prior to the summit. Can we make sure that Burke et al are ok with the proposed naming conventions ?

Jan has been working on this so i think that she will love to help. if we are going to do number 3 manually, should we set up some spreadsheet mechanism to track and review.

Thats great!. To get something started soon a spreadsheet should work.

if you can get the data for 4, that would be great. i would like to include that in the annual report. can you also present that data/ have that data for the summit?

Apologies for the delay. Here is the data. I think this should be find for the report. If you need some more detail let me know. the format for the following data is Time Frame - Number of Downloads - Number of Countries/Territories Downloading it (The whole text is linked to the detailed statistics from sourceforge) 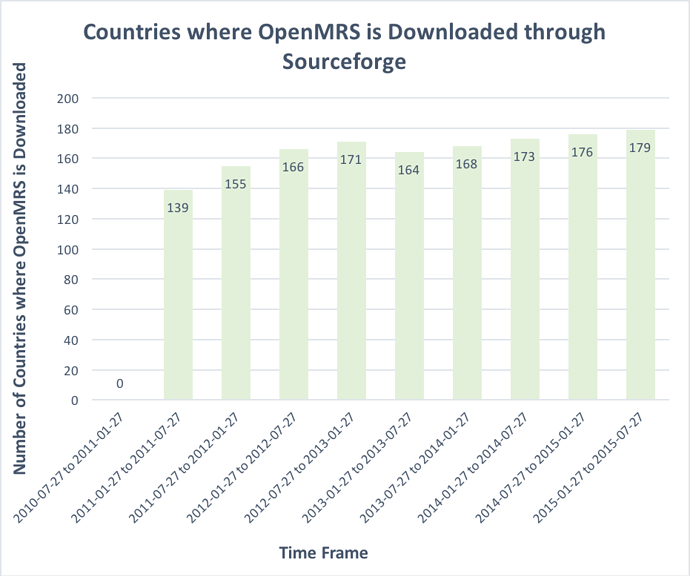 But, I am not quite sure the above one quite captures the impact. Maybe we could use the image from Sourceforge itself to better depict them:

we should figure out something more than just downloads ( for instance, impact) but i am not clear how to do that yet.

The only impact metrics we can show by summit would be atlas results and Judy’s statistics from the survey. There are discussions going on in Objective 1 about how we can improve capturing the impact, but nothing concrete is yet decided.

I think @wyclif, @darius, @burke or any dev/5 should look into heading this conversation as I am not sure what are the exact upgrades that can be done. I can coordinate and propose one in the ideas page to get something started.

would be great to reorder prior to the summit. Can we make sure that Burke et al are ok with the proposed naming conventions ?

I can go ahead and do the reorder right away. But I would be more confident if it is discussed and agreed upon. There is a call for objective 1 tomorrow, where I can bring this up and see what they think about it.

perfect. thanks for doing that i would suggest that we put the download information into the annual report for CY 15 also. NICE!

would be great to reorder prior to the summit.

Asked in the platform call today. Updated the Release Process Page with the reordering