What have we done?

As you remember, we are using OpenEMPI utility as Master Patient Index repo, which is hosted on remote server. So now, when you are going through registration workflow - we are not only searching for similar patient in local DB, but also perform querying to remote server for searching similar patient. In result we receive list of possible matches, which contains both: local and MPI matches. For local matched clerk is available to “open” patient page and see all information, but for MPI patient (as they are not located in local DB) we implemented “ImportPatient” functionality, which flow is next:

Functionality we are going to implement in near future:

Bugs which have to be fixed/issues in which we need advices/suggestions of community.

Saving instance of MpiPatient to local DB. We have problem with this issue. Our MpiPatient is extending Patient class, and we want to save it to DB but during saving we get Exception “java.sql.SQLException: Field ‘date_created’ doesn’t have a default value”. Right now, we do not want to save additional fields/columns to DB (probably we will want in future) but we just want to operate with instance of MpiPatient when we are performing “converting”, “saving”, etc. Currently we are using workaround when save it to DB, and that’s not OK.

I haven’t had a chance to look at the code yet, but I wonder if it would make more sense to structure it as

Also, please add screenshots to the above!

Founded similar patients in local DB and in MPI: 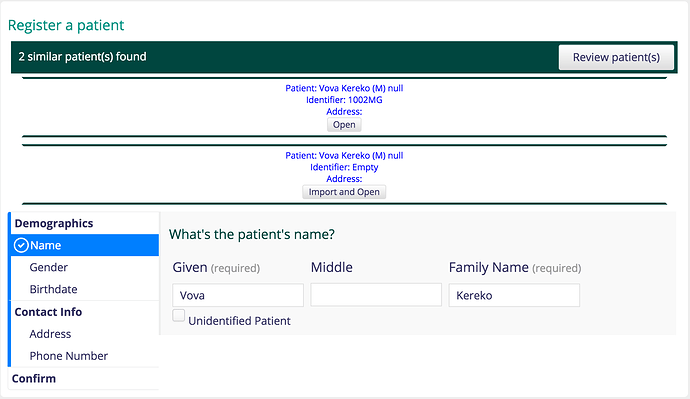 Imported MPI patient to local DB and created OpenMRS identifier for him:

The thing which worries me. Do we need another one UI for “Similar patients”, and if we need that, how we should change it? For me, second one UI is redundant. The thing we can do is just change colour of “Similar patients” div from Green to orange on “Confirm” stage. 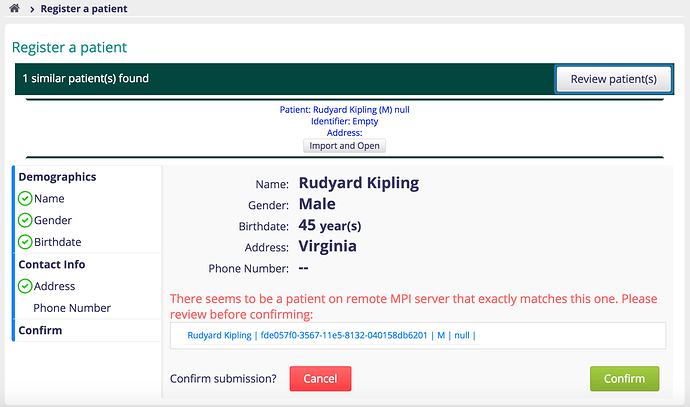 I have deployed OpenMRS with our enhanced Registration module to server: http://188.166.68.46:8080/openmrs You can access it by credentials: clerk/Clerk123, admin/Admin123. Check it out and give your feedback

Thanks a lot! Have you viewed new UI for “matched patients” during registration workflow? What do you think about it?

We have implemented Filter for “matched patients”. So now, after importing patient to local DB, you will receive that patient as “found similar patient” only from local DB, but not from both local DB and MPI.

If you are interesting, check out my screenshots on my blogpost: link . Soon I will update module on my dev server, sorry about server is down now.

See this mockup to give a sense of what I mean. (I also added the “last visit”, which I know you haven’t implemented yet, but I think we should prioritize. Obviously local patients may have this, but MPI patients never will.)

Definitely we should only be showing one UI widget on the confirmation screen.

Note that we have the idea of two distinct algorithms for “fast” vs “precise” and in general we want to preserve this distinction.

The idea is supposed to be:

Thanks for your reply, this part is important for me, and your advices will help me to move forward

Ok, so we have improved a little bit UI 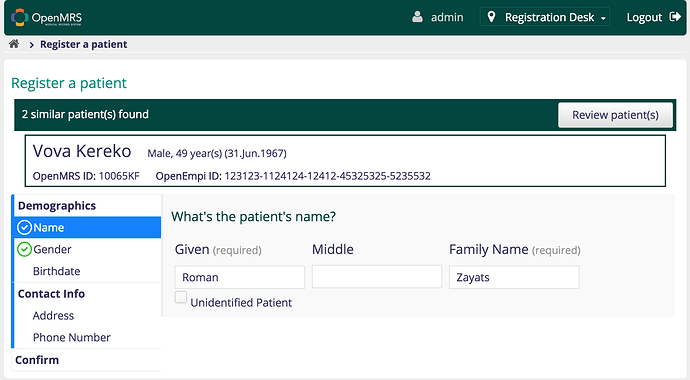 Yep, we have pushed him after registration to MPI server:

When I was a GSoC student, that always made me laugh…I think it has @burke written all over it…@paul made John T. Patient I think it was? It’s been so long.