In June 2016, the PIH Medical Informatics team implemented phase 1 of an EMR at the Wellbody Clinic in Kono, Sierra Leone. Wellbody Alliance (http://wellbodyalliance.org/) is a non-governmental healthcare organization founded in 2006 originally to treat amputees and civilians wounded during Sierra Leone’s civil war in the Kono district. Within two years, services at the clinic set up by Wellbody were made accessible to the entire population of Kono. In fall of 2014, Partners in Health began working in Sierra Leone to assist with the response to Ebola epidemic. PIH has formed a partnership with Wellbody Alliance and works at the Wellbody Clinic in addition to other locations in Sierra Leone to provide care.

The Wellbody clinic is located in Dorma, a village in Kono just outside of the city of Koidu. The volume of patients being seen at the clinic has been steadily increasing and as of June 2016 is seeing as much as 250 patients/day. The services provided include Primary Care, Maternity/Deliver/Antenatal Care, HIV, TB and others.

The MedInfo team started working on analysis on the EMR in the Fall of 2015 with the PIH Sierra Leone team. They mapped out multiple phases for implementation, the first phase of which included Patient Registration and Visit information. In November, Christian Neumann traveled to the clinic while under contract with PIH and installed a server locally at the clinic and performed initial analysis on the system requirements and IT layout of the clinic. In May 2016 the team in Boston continued work on configuring Bahmni for this first phase of work.

In June, Cosmin Ioan and I traveled to the clinic to implement phase 1. The registration staff and the clinic leadership were trained on the registration functions and given a preview of some of the completed clinical functions. On June 9th, the clinic began using the EMR for registration at the clinic. Each new patient is being registered on the system and issued a plastic id card generated out of the EMR. Returning patients bring their cards back which are scanned into the system to identify them. The reason for visit and payment information is captured for all patients receiving care. Reports can be produced with detailed address and other demographic information for all patients and reasons for every visit. This system is considered a big improvement over the previous process of recording every patient onto an excel spreadsheet and hand writing an identification card for them.

Since then, the team has registered up to 250 patients a day, registering almost 3800 patients in the first month of use.

We are now working on future phases of the EMR which include Vitals capture, Consult notes, Lab and Pharmacy orders.

Thanks to everyone on the Bahmni team for assisting us!

Do you have any demo site to showcase the EMR implementation?

Great work @ddesimone and the @PIH team entirely! You’re also amazing, actually every implementor is amazing – and so are the devs who support them…actually everybody is awesome, I can’t leave people out!

As far as software, we had to work with the Bahmni team a bit to get the workflow to fit the clinic’s process. For example we added a configuration option to automatically navigate the user back to the registration “home” after registering a patient and recording visit information. This matches the setup at the clinic where there is separate staff registering patients over and over. As far as other software challenges, one of our developers (I’m a Business Analyst) may have more to share regarding the Bahmni configuration and pipeline that we built.

We found that the actual implementation went more or less according to plan. We worked with some really good people on the ground who were very familiar with the process and knew how to integrate this new system into the workflow. The first few days were a little slow in registering patients, mainly because in the system every patient was a “new” patient. For new patients, demographic info like address, any existing ids (HIV, Ebola) etc… are collected. For existing patients just payment and reason for visit information is collected. Also, on the first day there was only 1 computer set up to register patients. After that, we connected an additional laptop to the system. The only challenge was connecting it with the one label printer they have, which we accomplished by sharing the printer to the network. So now multiple people are registering patients and printing to one label printer, which takes a bit of coordination, but is generally working well.

I’m sure we will have more to share when we implement the clinical functions.

One interesting fact is that this primary care system captures if the patient is an ebola survivor or a family member had ebola. In Sierra Leone, this is incredibly useful information – especially with vision, mental health, and financial impact. 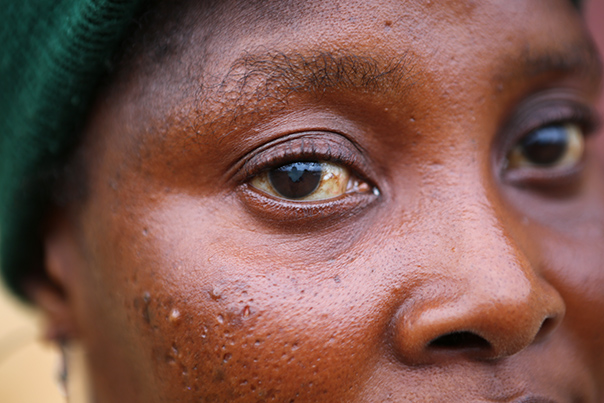 A look back at PIH's pioneering post-Ebola eye care program.