Hello community , pray all are well.

As we plan to release OpenMRS Platform 2.5.0 by mid of November 2021, below are the features we anticipate to include.

More details can be found at the Technical Roadmap Page

Don’t hesitate to let me know in case I have left out anything.

One of our key tech strategies at the moment is test automation (i.e. to increase trust & qa in OMRS tooling). Are there 1-2 tangibly useful things, such as integration or lint coverage, that we should add to this 2.5 plan? Half of the issues below are in-progress, so why not add them to our Platform Release to increase awareness of the automation work we are doing to increase resiliency and trust in the Platform?

Here are some ideas based on recent discussion in the QA Support Team: 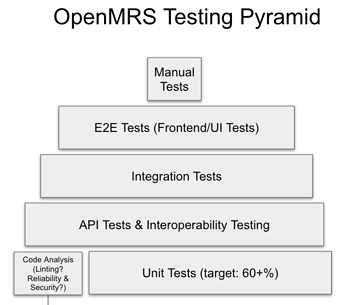 One of our key tech strategies at the moment is test automation (i.e. to increase trust & qa in OMRS tooling). Are there 1-2 tangibly useful things, such as integration or lint coverage, that we should add to this 2.5 plan?

Thanks @grace for bringing this up . Let’s wait and see what others think .Did you manage to get any feedback from the MF Squad concerning user_patient_property ?

This is awesome and we are looking forward to improve the platform core area as well.Thanks @grace @tendomart

I don’t think we need that ticket per-se. We already have some of those tests in the QA Dashboard. See here.

What we might want are RefApp tests against those databases.

PostgreSQL, MySQL, MariaDB, and the Wizard are all passing with the latest builds

We have tests for PostgreSQL and MySQL. We could add a similar flow for MariaDB. I’m not sure what “the Wizard” is in this sense since all of those test flows are going to need to run through the install wizard, so it’s not really a separately testable item.

This was simple to fix and is done.

Set up Sonar to run against openmrs-core PRs

I’d like to see greater Sonar adoption for more than just core too, but we should maybe things about migrating things to Sonar Cloud, especially for PR adoption. Sonar is one of those things that runs on OpenMRS’s infrastructure but isn’t kept up-to-date (we’re on a release from 2017). Sonar Cloud claims to be free for public projects.

Also: What about this old ticket that @mogoodrich logged back in 2019? It was saved from the Graveyard by @mseaton - it’s still a need. [RESTWS-765] Improve supportedResources to allow easily compatibility with new versions - OpenMRS Issues