We are strictly controlling access to jira/confluence. You must be trust level 1 before we grant you access if you are a new user, or have a convincing reason. Users can browse confluence without needing access, so unless you need access, we will likely only grant access to JIRA. We may not grant access if you do not have a reason. In rare cases, we might grant access outside of these requirements, but this is extremely rare.

If you have previously accessed either JIRA/Confluence, you already have access.

We are trying to prevent spammers from clobbering both Confluence and Jira. When evaluating whether or not to grant access, we will look at the quality of communication and engagement with the community.

Instead of a non-dismissable banner at the top of every page:

Could we adjust the footer:

Sure I will do that – JIRA is in a bit of a less obtrusive way. I needed to do something.

Fixed it – now the wiki home page when a user is not logged in shows this – the red box is what I added – and will only be shown if you are not logged in: 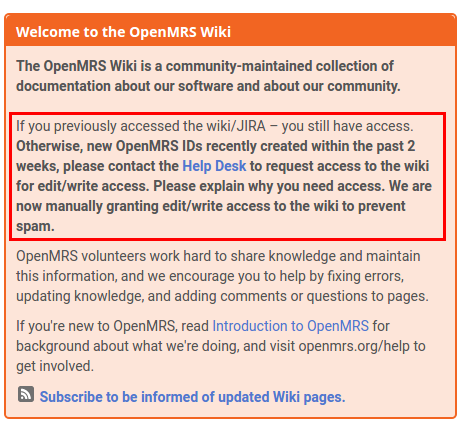 JIRA will have a banner that is far less obtrusive.

You might want to use an absolute instead of relative date reference, so you don’t have to keep updating the notice – instead of “past 2 weeks” say “after 13-Jun-2016.”

I’m assuming people who recently got an OpenMRS ID could still authenticate to the wiki; they just wouldn’t be able to edit pages. Any chance it could be hidden based on privileges instead of authentication? Ideally, the notice would only show up for someone who was authenticated (anonymous users wouldn’t see it) and didn’t have general edit access.

Only anonymous users see this message. A user in order to access confluence, must be in the confluence-users LDAP group. That is the condition – users NOT in this group. If they are in this group AND signed in, they see a different message: 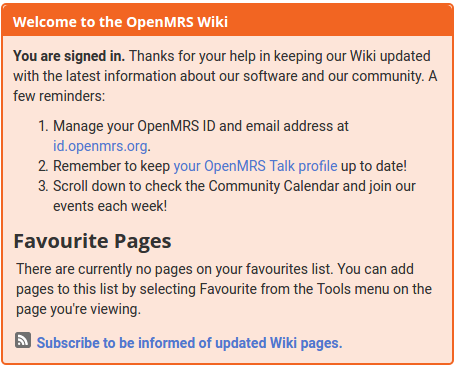 Now we have warnings in place, can we unpin this topic?

believe it or not I still see people completely miss them…but I guess?