Am Magembe Sharif , from Uganda ,Kampala, and i have been actively involved with OpenMRS for 2.5 years up to date

Am glad that i will be working directly with @k.joseph as my Mentor along my fellowship journey and hope for the best

In the First Month of April of the fellowship

i have been working on broken/ un ignored automation Tests in refApp distro-uitests , with these last two weeks, i have really improved with debugging skills structure especially using bebugging tools , gained familiarity with more of selenium java methods and using already built automation tests with the help of my mentor @k.joseph .

Hello Everyone In the last weeks as a fellow,i continued to work towards the development and resolving broken failing tests with our working pipeline perhaps we are still in the line of resurrecting broken tests as much as we can, wrote a number of fixes involving writing selenium/cucumber gherkin feature files which are under review at the moment

Currently i have been working and getting more familiar with cucumber framework integration and selenium especially leveraging on how we can generate more readable and usable reports for non technical implementations, Still continuing to

3 .Attending Quality Assurance support calls, Had weekly meeting with my mentor @k.joseph to define weak areas continuing to aim higher in the next course of the week and helping others who might be blocked

In the past two weeks , i have been mainly working on Fixing broken Issues and debugging the server logs

In the Next coming two weeks, still i will continue fixing broken issues since we still have alot of coverage to take part and continuing to help release manager to define his goals

In the past two weeks, i have been learning the idea behind E2E End To End Testing (User interface)for openmrs in quality Assurance and its based automation workflow . and have been working on two different E2E testing one for Search and Patient Registration and EditPatientRelationships which are under progress and review Ideally our main focus with current ongoing work on implementing E2E considers the following technical guidance

Here is the diagram that shows the E2E FrontEnd test Process architecture, thanks to @grace and @k.joseph for amazing architechure 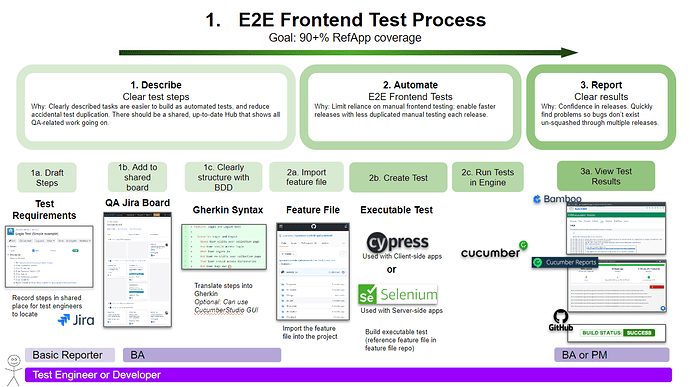 Through this period, we have picked up on a number of tickets that contributes to the development of E2E test based workflow @kdaud and i are working towards achieving a best E2E test based coverage. Have learnt how to set up Cucumber hook configurations while implementing E2E based workflow which is the main deal of writing stand alone based E2e test by default

Cucumber Hooks briefy cucumber hooks are blocks of code that run before and after each scenario , these hooks can be defined any where in the project especially in step definition classes, they help in better management of code workflow using methods like @Before and @After and probably reducing code redundancy . ideally they help us to perform our scenarios and steps, Feel free to checkout already built in hooks example thanks to @k.joseph for introducing to us to this awesome use case

Our main aim currently is to increase the development of E2E tests coverage still that will give confidence to the user experience in response to release of RefApp 2.12.0 as well .Thanks for qa support team that we confident our Automation test coverage is increasing daily which gives us assurance for release management to comprehend.

In the next couple of weeks, i shall still be focusing on writing / developing /improving new E2E test cases and fixing broken/ignored issues to have maximum test coverage.

Had weekly calls with my mentor @k.joseph every thursday to continue on the work improving fellowship plans and checking through mastering different technical skills both qa and out side qa

Have attended QA meetings,Helped others both on slack ,talk, irc , Helping the release manager for the next release of refApp Thanks for the support ,cc @jennifer @k.joseph @kdaud @grace @christine Cheers

In the Past Two Weeks, i finished up some tasks in referenceapplication distro which included only broken selenium tests which some are still under code review and some got merged .

Am currently working on E2E testing that were recently added in the qa board which requires E2E for search and Patient registration and EditingPatientRelationships specifically ,Then still i continued to learn more of how we can re use some Step definitions methods while implementing E2E since en counting of step duplicates occur at some point, very important aspect.

Curated tickets and created some tickets to cater for next test cases automation testing.

In the Two weeks, i shall still continue to improve the broken issues which are not yet merged, develop new E2E automation Testing that might be needed, Getting a path to improving written automations that generate test reports using cucumber studio and also writing new feature files that are missing currently in qaframework board to increase the test coverage, i also plan to join OCL/MFEs to write automations using cypress .

Had weekly calls with my mentor @k.joseph , Helped others who joined qa support Team and also attending qa weekly meetings, here is the vedio and this of debugging selenium tips

In the previous weeks, i finished up some tasks in both referenceapplication distro which were still pending and qaframework updating the E2E workflow based testing this include searchAndRegistration E2E Test and EditPatientRegistration, still this is progress due to clear workflows that need to be finished soon,

Refactored selenium Tests that needed clear workflows, especially Tests that need to be independent, this led to refactor of AddFormTest into single based test to cater for all the workflows came along with its test like edit,and delete thanks to @k.joseph ., LoginTest and ContactInfoTest as well.

Learning creteria: Am hooping some languages quickly especially cypress to have my hands dirty soon to snyc with OCL and MFE automations support teams.

Security Automations PipeLine:: We started on leveraging how we can also get started with handling security Xss vulnerabilities through automating the procedures, i already created a ticket in qa board here , thanks to @jennifer @k.joseph @isears @christine for spear heading this ,Looking forward to see how we shall manage this.

In the next coming weeks, i still continue to leverage all the tests that are not yet merged into master to increase our test coverage by fixing them, reviewing prs as well, thanks to @k.joseph @kdaud for interesting and remarkable reviews, Continue to meet with security team to get more going of security automation workflow,

Had weekly meetings with my mentor @k.joseph thanks for his advanced technical guidance , Helped others on talk, slack and attending weekly quality assurance meetings. Great thanks goes to all quality assurance Support team cc @k.joseph @christine @kdaud @irenyak1 @insookwa @gracebish @jayasanka for great work done the roll is still in our hands. cheers .

Security Automations PipeLine: : We started on leveraging how we can also get started with handling security Xss vulnerabilities through automating the procedures, i already created a ticket in qa board here , thanks to @jennifer @k.joseph @isears @christine for spear heading this ,Looking forward to see how we shall manage this.

That’s great Sharif! If you need further support on RATEST-168 when you go back to it, @isears and @ibacher would probably be good contacts.

It’s great to see your continued growth Sharif! Keep up the good work.