Must specify either an htmlFormId or a formId for a valid html form?

We created some forms with the html form entry module. After we submitted the filled in form we are trying to visit it again but there is no option for the view mode as e.g. in platform 1.9.3. We installed the xforms module which created a tile for the form entries on the “home” page. 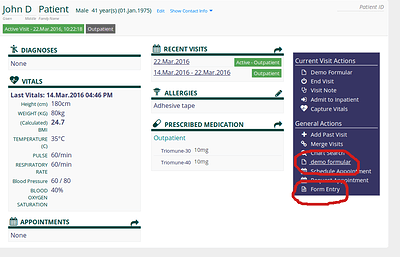 encounters.png997×322 38.2 KB
When we try to open the encounters, we get the following error: HTTP Status 500 - You must specify either an htmlFormId or a formId for a valid html form. 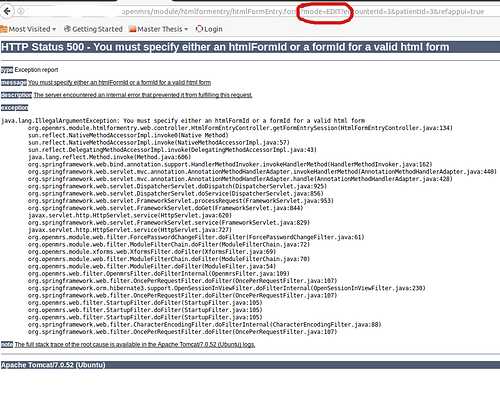 So far, we found out that the url is probably misconfigured as it puts the “mode=EDIT?” there (but we still want to visit the form), causing this error. The url: …/openmrs/module/htmlformentry/htmlFormEntry.form?mode=EDIT?encounterId=3&patientId=3&refappui=true

Is there a way to display the form in the new style like when filling out a form directly from the patient dashboard (General Actions)? 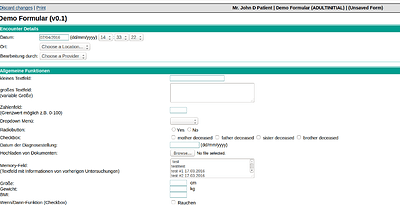 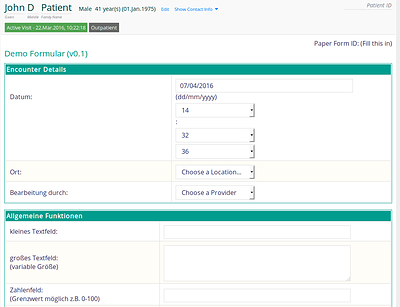 Can you reproduce this here http://uat01.openmrs.org:8080/openmrs such that i get a proper understanding of what you need?

Thank you so much for the fast reply and the test server! We were able to reproduce the error as seen in the screen shot:

Now we realized, that we are using the HTML Form Entry Module to create the forms. On the link you send us, there were two forms created with the xforms Module, which worked perfectly fine when opening them like we did in our first post. Then we created another test form with the HTML Form Entry Module which gives us the same error as before. Does this mean we can only use the xforms to create forms in the new OpenMRS Version so we can open them via the patient dashboard “General Actions” --> “Form Entry” --> “Encounters”–>Form Name ?

But even then we can only edit the form and not just display the filled in form, which we need for printing. We are still looking for the “View Mode” like in the older versions…

Long story short: Is the “Form Entry” tile and link only to display forms created with the xforms Module?

And is there a way to edit eg. the length of the input fields with HTML Form Entry? Our CSS seems to be ignored in this new design.

@maremo, I think you’re running into a shortcoming of the Reference Application. It’s similar to the fact that you can’t edit custom forms after they are submitted. See:

@arbaughj @maremo not sure if this will help but we added the Xforms module (https://modules.openmrs.org/#/show/155/xforms) which gave us an edit link on this page

So to clarify your post: There is currently no “view mode” in the new OpenMRS 1.11.x Version like in the old ones (see pictures above)?

Except for the “show details” part in the visits. And the problem is that I can only see the concept names linked to the observations which is totally confusing for the users, because in the original form there are text labels linked to them. Also I noticed that the order of the observations is totally different to the form!? Is this all a “shortcoming” of the ref. app? 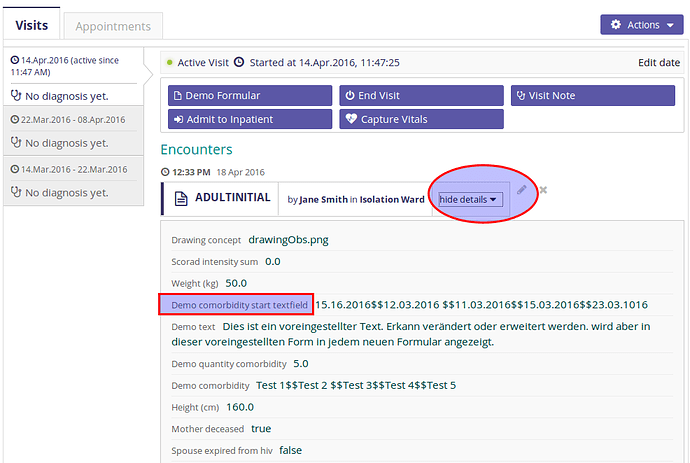