(This was an email, but I’m copying and pasting it here for broader visibility.)

I have attempted to define our list of concepts that are included in the reference application in an OCL collection here: https://openconceptlab.org/orgs/OpenMRS/collections/RA/concepts/

@jteich , @burke , can you poke around at this just so you know what there, and get a sense of the OCL UI? (FYI the current list of diagnoses in the reference application is horribly inadequate. It’s the exploded set-of-sets of ICPC Diagnosis Categories. To follow this in the OCL UI you have to click on one of the set members and then click on the Mappings tab.)

@paynejd , the fact that I felt compelled to write the last sentence above makes me agree that we must prioritize the UI ticket about browsing between concepts, and/or a simpler one about having a better default “details” screen.

Currently these concepts are packaged in the referencemetadata module in three xml files:

(I don’t know where these xml files come from; they used to be MDS packages in http://mdsbuilder.openmrs.org:8080/openmrs but I guess Rafal has changed that around.)

I wrote a script that will take as input a list of CIEL concept IDs and update the OCL collection. (This is currently necessary since the UI is too awkward to use at this scale, and there are actually 891 individual references in the collection, meaning concepts and mappings.)

I will check this script into github later, so that anyone else may use it later as part of the release. [Edit: I checked this into github at https://github.com/djazayeri/openmrs-contrib-updateoclcollection]

@raff, can you plan (eventually) to get the team working on incorporating this into the refapp installation/startup process, and remove the xml files?

@jteich , @burke , can you poke around at this just so you know what there, and get a sense of the OCL UI? (FYI the current list of diagnoses in the reference application is horribly inadequate. It’s the exploded set-of-sets of ICPC Diagnosis Categories. To follow this in the OCL UI you have to click on one of the set members and then click on the Mappings tab.)

The for putting together this summary, @darius. You’re correct that the current list of diagnoses in the reference application is lacking. My hope was that we could come up with something similar to SNOMED CT-CORE, which contains about 6000 of the most useful diagnoses and findings. Glancing at the RA Concepts collection:

I was testing importing concepts and mappings and found out that some mapping are referring to concepts that are not being imported. As @raff suggested I’m pasting this list of mappings here http://pastebin.com/7S5Uhpuv

Sorry, there’s a bug in my script. Let me fix it, and then we can try this again.

I fixed the bug in my code. Now there are 2316 references in the collection, instead of the 891 I was getting before.

The production OCL server is down (hopefully not because I broke it!), so I have set this up on the staging server: https://staging.openconceptlab.org/orgs/OpenMRS/collections/RA/concepts/

(I did not go and check all the mappings mentioned by @adamg but I did verify that concept 160168 mentioned by @raff is included now.)

The OCL production server is back, so you can now see this at https://openconceptlab.org/orgs/OpenMRS/collections/RA/concepts/

Unfortunately when I try to create a new version of the collection from the UI the server times out with “504 Gateway Time-out”. It probably needs to be fixed to be run as a background task…

@paynejd, do you know of any workaround we could use here? Maybe there’s a way to increase the time out…

@raff when I look at https://openconceptlab.org/orgs/OpenMRS/collections/RA/versions/ it seems that creating the versions actually did work, it just took forever and did happen in the background (but the page timed out first so you had no way of knowing this).

I had created a related ticket at https://github.com/OpenConceptLab/oclapi/issues/481 so maybe you should add a comment to it.

Great! @adamg, how about you try again now?

@raff There are still some mapping errors like before but for different ones this time. See below

There are no errors in the server logs. I’ve created issue to fix logging. OCLM-60 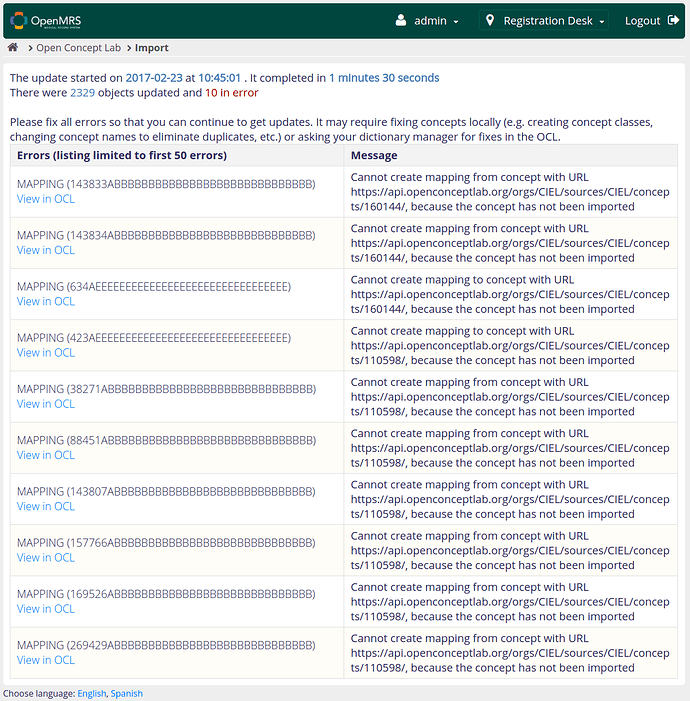 When I do both of these searches I do see the concept included in the RA collection:

Help me understand what the problem is.

I’m trying to find the problem, but you are right that these concepts are in the collection. For some reason they are not imported…

@darius, interestingly those concepts are not included in the export json file for the version I created at https://api.openconceptlab.org/orgs/OpenMRS/collections/RA/v2.6.0-alpha.2/export/

@paynejd, do you have any idea why it might be that some concepts are missing (see Darius last post) in the export file, but are visible in the UI? Were those concepts added properly to the collection or is this a bug in export code?

Hi Rafal, there have been a few experiences in the past where a resource is added to the repository but not the repository version, or vice versa. However, we have not been able to isolate when or where the bug is occurring. Does this seem like what might be happening in your situation? If this is it, it is possible to fix it at the MongoDB level and then update the index.

Thanks! Yes, I believe it’s the case. Can you fix that in MongoDB?