I have noticed that KenyaEMR and UgandaEMR model drugs differently. CIEL has created a concept for a regimen which is a single concept of type MISC that is mapped to multiple SNOMED codes for each of the drug components to aid in analytics and reporting. UgandaEMR has the regimen as a set, of concept_type drug with maps to the individual drugs. @ssmusoke and @aojwang , I think we might want to discuss best practice here. CIEL has only actual available drugs classified as drug with the RxNORM codes for the ingredient or multi-ingredients at the concept level. CIEL currently does not have concept sets for the regimens as the use case was for documenting the regimen rather than ordering individual drugs. If we want a quick way to see the individual drugs for a regimen, we could also include a set for the regimen, but it would not be mapped as a drug nor would it map to the underlying drug codes.

When we created the OpenMRS data model, I think we imagined implementations would approach the modeling of regimens with:

and combination drugs with:

I don’t think we imagined using terminology mappings – which we considered to be mapping of concepts to reference terminology – to define drug regimens.

I was not thinking mappings for regimens. This was for analytics. Many implementations need to capture the notion that a patient is on a regimen which means a single concept for a group of drugs. The set may help in ordering, but cannot be used for analytics. In the top example there are three concepts, at least three drugs (but probably more) and the set. I don’t think we can use the set as the answer to a question “On which regimen are they on”.

Thanks @akanter for the observation and sharing your thoughts on this issue. We don’t seem to have deviated so much from the ideal modeling in KenyaEMR. We use a concept i.e. AZT/3TC/NVP to record a patient’s regimen and use order set to facilitate ordering for the individual drugs AZT, 3TC, and NVP as shown in the below screenshot.

Most of the regimen concepts I believe are CIEL but I will have a quick check to see if we have anything else.

PIH uses drug orders and the new htmlform tags. When you choose the “Drug” (concept), the “Formulation” populates with all drugs that match that concept. 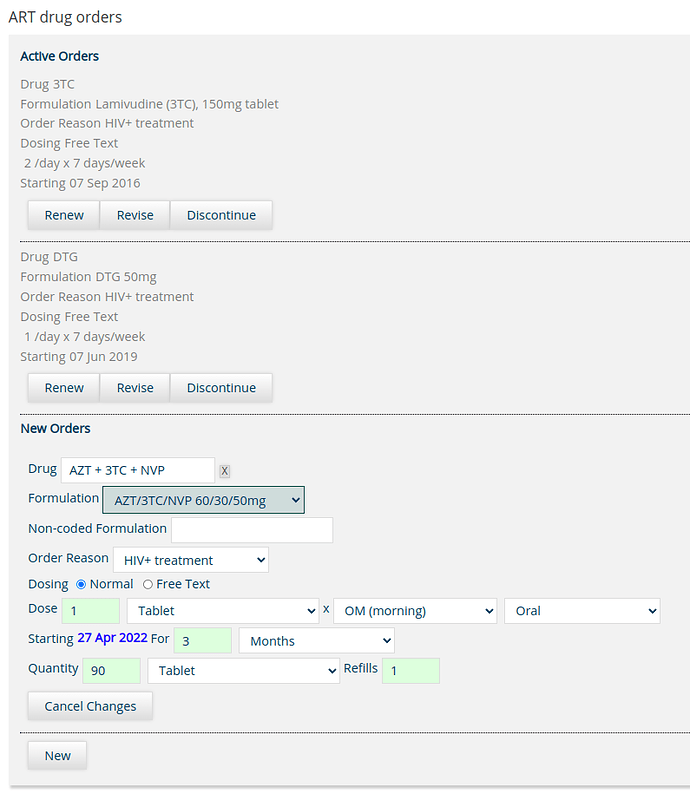 We are not using ingredients.

Ellen, does PIH document “regimens” which are groups of drugs as specific concepts? The example above is a combination drug, but what about regimens that require several drugs or drug combinations?

Antony, is the order set manually managed or are you using a ConvSet to pull the component drugs to populate the form? Right now, CIEL has been in including the regimens as concepts not as ConvSets containing the component concepts.

Not sure I understand.

For example, are you suggesting that one regimen includes 3 different tablets: AZT, 3TC, and NVP? That would be 3 drug orders and there is currently nothing in our code that connects them as 1 regimen.

We manually manage the order set

Exactly, Ellen. Patients are considered to be on a regimen (1st line, 2nd line, etc.) consisting of a combination of drugs. If those drugs are available in a multi-ingredient combination, then it might be a single order. However, most of the time they require multiple prescriptions/orders. The patient is classified as being on a regimen (a concept) and they may or may not be receiving their drugs through orders or obs in OpenMRS. I have not created MedSets or OrderSets to convert the regimens into easily orderable sets in CIEL. It sounds like there should be. However, I would imagine that orderable regimens actually consist of DRUGS (with dose and form included) and not CONCEPTS.

Quite close to what we do as well. Only that we don’t use order sets but utilize orders for our Point of Care implementation.