I’m having issues with reporting. If I apply any filter, I only get zeros for all indicators. For compostion queries, it only returns the fvalue for the first listed cohort, not the intersection or union. I’m using openMRS version 2.2.0 SNAPSHOT Build 88cc02, and reporting module 1.12.0. Things work as intended on the reference app, but I can’t figure out what would be causing this on our implementation. Any suggestions?

You will have to give more details about what you are doing, e.g. point to the code for the individual filters and composition, or share a screenshot of this.

Thank you for replying, your time is greatly appreciated. Here are screenshots showing the issue with the composition query: 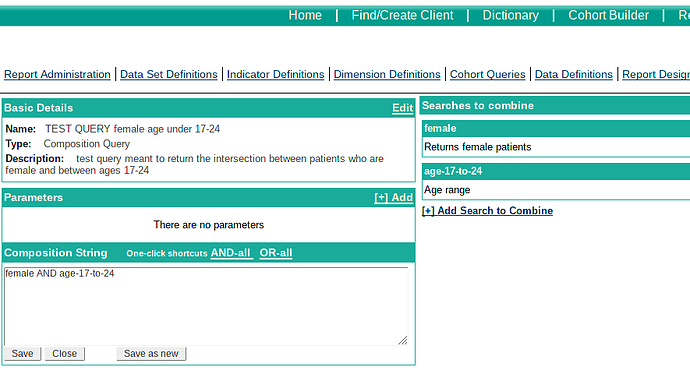 Where female is a gender cohort query and age-17-to-24 is an age query (the name says under, that was a a typo). Here are the results: 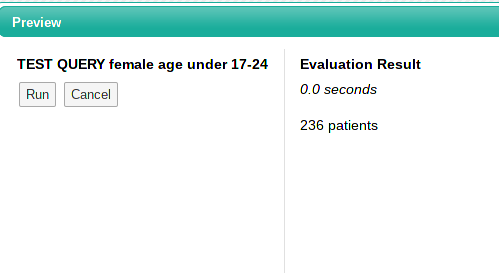 where it returns only the result of the number of females. If I switch the order of the composition string, it returns the the count of patients within that age range.

For the filter in the period indicator report:

with the results being: 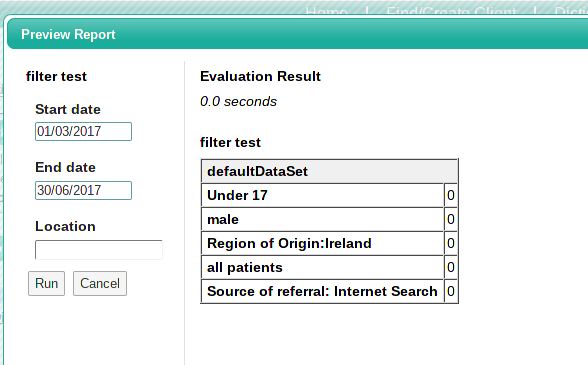 If I remove the filter, 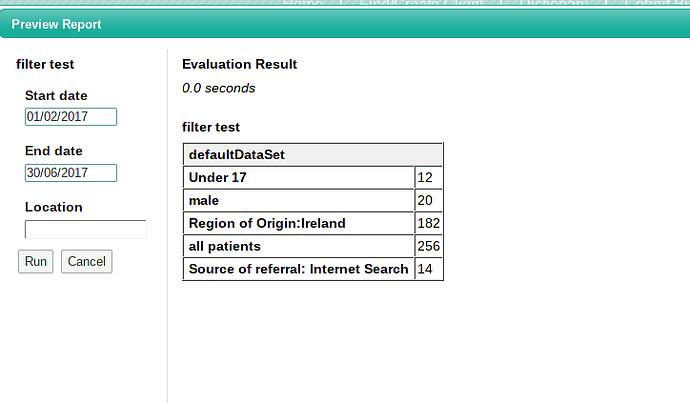 Interesting. What version of openmrs-core and the reporting module are you using?

If it helps, here’s the rest of the system information:

I quickly tried to replicate the first error on demo.openmrs.org (openmrs-core 2.0.5 and reporting 1.12.0) but I could not. Can you try to replicate this there, or on qa-refapp.openmrs.org, so we can debug further?

Also, I see this:

Is there a specific reason you’re using a snapshot build of openmrs-core, instead of a (stable, supported) released version?

My attempts to replicate the error within the reference app haven’t been successful, however I will continue trying to do so. Regarding why a snapshot build is being used, I will have to ask our system adminstrator why that is the case.

Okay, good news, the problem has been fixed. I spoke with the system adminstrator, and she reported that the issue was, in her words, " It seems like the may 4th war was diff than the April 27th war. We were on may 4th, moved to April 27th. Allso compiled from scratch because may 4th was broke."

Not sure if that helps with identifying what the underlaying cause for the errors where, but all is working as intended now.

Thank you again for your time.

Please pass along the message to your system administrator that:

@mseaton, FYI from this thread it’s possible that something between the April 27 and May 4 versions of openmrs-core breaks the reporting module.

@darius, hmm - odd that anything in core would do that and nothing really stands out in the commits listed during those dates in github (though I only skimmed them, and not sure if they represent reality at that time). Could there have been code introduced around the expanded Cohort / Cohort Membership stuff that is incompatible with the way Cohort is used in reporting?

It’s quite possible that we (accidentally?) broke backwards-compatibility of some Cohort method…

The reporting code for CompositionCohortDefinition isn’t totally straightforward to read when I peeked at it right now, but we should look into it.