hello there, I am just trying to demo the standalone version and I wanted to install some other modules. I also wanted to insert text in another script (arabic). Please can someone advise me on how I might do these things. Many thanks, Dr Rob Dent

Where are you trying to insert Arabic text? What is happening when you try to do so?

hi there, thank you for your reply. The arabic text is for the patient name, It allows me to write with the arabic text, but when the name appears on the top of the screen after saving, it is written in 0 and x and various other symbols.

My guess is that it’s an issue with the embedded MySQL collation settings, since it seems to work on the demo site here: 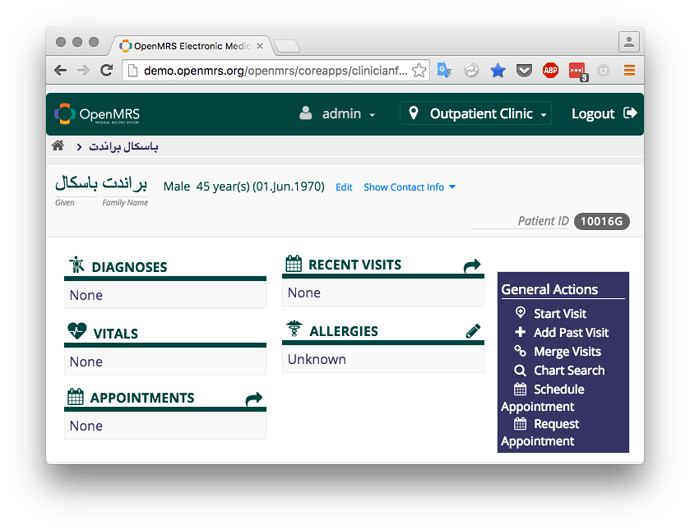 Can you confirm it also works on the demo site for you? @wyclif or @dkayiwa might have an idea what’s going on.

yes it did work on the demo site. Thank you for your time

I am on the same site with Rob trying out openmrs.

I was wondering if anyone had more info about the arabic script issue? It does seem to work on the demo, but on all the installs on multiple machines we’ve tried so far the issue is still there. The arabic names get garbled on screen and in the database after entering a new patient through the register patient button, but if the patient name is later edited form the patient dashboard, the arabic name works fine.

The installs I’ve tried so far have been on windows machines, either the standalone or installed with tomcat + mysql55 on windows.

On the online openmrs demo, both new patient registration and edit patient works fine in arabic.

@mdg583 can we have a look at your runtime properties file?

Sorry, I forgot to get back on this. The properties file is from the standalone and hasn’t been modified, except for maybe the port number.

By the way @mdg583, @robdent which version of the standalone are you running?

@mdg583 i have been able to reproduce it. Looking into it now.

@mdg583 this was a bug in the standalone versions and thanks for reporting it. I have just made a commit to fix it. You will get it in the next standalone releases that are soon to be made.

Thanks for looking into this.

Can i look at your tomcat’s server.xml?

For the connector that has port 8080, can you add URIEncoding=“UTF-8” as you see it here? https://struts.apache.org/docs/how-to-support-utf-8-uriencoding-with-tomcat.html

I made the change and the deployed version now works.