How do I upload and view a patient image in OpenMRS 2?

I checked the link http://demo.openmrs.org/, but i couldnt find anywhere the option to upload/ vew the patient image. Can somebody help me to find the same?

The Patient Image module is an additional module for OpenMRS Platform, and is not bundled with OpenMRS 2.x which is what’s running at http://demo.openmrs.org/

(As a side note it has not been updated since 2012 and I don’t know it’s current compatibility with the latest Platform version.)

@sunbiz is the owner/maintainer and may be able to provide additional information.

It works fine with the legacy UI patient dashboard on the latest releases (platform 1.11.x or ref 2.2). But it doesn’t show up on the 2.x UI dashboard. A good weekend project to target for this weekend. Will update the module release page and this thread when its done

I’ve made a new release of the patientimage module. This works with the 2.x UI dashboard as well as the legacy UI without requiring any of the reference application modules. Download module: https://modules.openmrs.org/#/show/102/patientimage Module’s source repo is now in github - https://github.com/openmrs/openmrs-module-patientimage

@sunbiz… Thank you so much… So now is it deployed as part of openMRS2.x. Is this funcationality available in demo.openmrs.org now?

demo.openmrs.org is running OpenMRS 2.2, and the module was not included in that release.

OpenMRS 2.3 release is pending in the next few days, so it is too late to be included in this release. It could be considered for an upcoming release, however.

Meanwhile, the easiest way to explore this would be to download the Standalone edition of OpenMRS 2 from http://openmrs.org/download and install the newly-upgraded module directly.

I have installed this new module on a standalone version of OpenMRS. However I am only able to upload pictures and view them under the Legacy UI. I have ensured the global properties are enabled to display under the 2.x interface. Am I missing something here?

Like the documentation page mentions https://wiki.openmrs.org/display/docs/Patient+Image+Module, the patient image upload or camera handling is only done through the legacy UI at the moment. Next release will allow adding patient image through the 2.x UI

But can you not see the patient image (once you’ve added it from Legacy UI) on the 2.x patient dashboard?

That is correct. However, navigating through the Legacy interface the patient image is still present. It appears that the patient image module is not incorporated into my 2.x UI. There is no empty slot for a picture.

Can you post a screenshot of how the patient dashboard looks in the 2.x and legacy UI? and do you see any exceptions in the log? 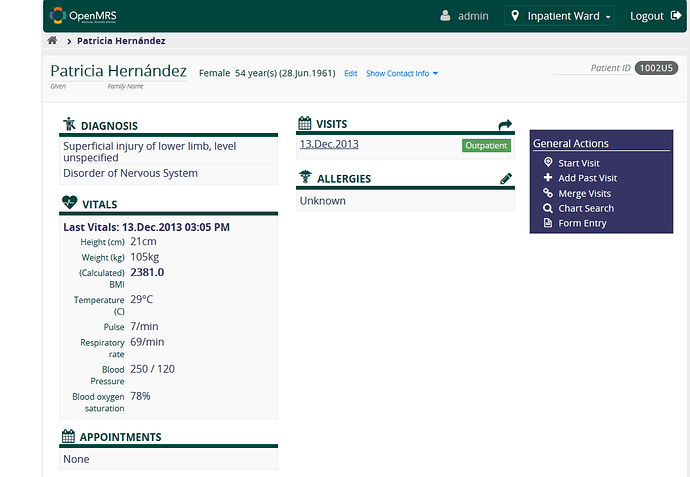 Thanks for sharing the screenshots. Can you please check if there are any exceptions thrown in the log?

Patient Image v1.0 module is not working in OpenMRS 2x. Is there any other approach to upload the patient image?

Hi, I am trying to use Patientimage. I t has been deployed successfully but when I open the Register a Patient page it asks for a username and password. I provided admin username and password but still it did not work. Same behavior on both legacy and new UI. I am working on OpenMRS 2.1.3 and Reference Application 2.8.1.

Which version of this module are you using?

I am using the patientimage-1.2.1 version. I believe this is the latest version

Can you share a screenshot of what you are seeing when you try to register a patient?