Schema changes to the obs table can be problematic when you have a very large obs table. We have a obs table with 27 million obs in it, and there were five schema changes to it that each took close to an hour, if not more, to run. As we are using OpenMRS in a hospital with an ED, we couldn’t afford to have 5+ hours of downtime. I’m currently testing this now, but it looks like we are going to be able to use Percona Toolkit to run those five changesets on our system while it’s online, prior to doing the upgrade. Thoughts on a good place for me to document this? (Also, we should really try to keep schema changes to the obs table to a minimum going forward)

This is great information @mogoodrich. I’m sure @jdick and others with large databases would appreciate sharing best practices for handling big database changesets.

I found a Execute Database Updates Module (Design Page) , but that’s from 2011 (I moved it to archived projects).

We should probably update or Database Update Conventions to include the point about changes to obs. In general, any changes to potentially large core files like obs should be vetted for alternative approaches and, when deemed necessary, coordinated in order to minimize the times we touch those tables.

I would expect to find info about this under the Implementation Guide on the wiki and/or in an upgrading section of the OpenMRS Guide.

I can work with others to pull this into a better place, but for immediate reference I wrote up more about what I did here:

We’ve confirmed that 4 of the 5 changesets (the ones that ADD and DROP) can be run “online” without locks in MySQL 5.6 (though they still take about an hour each to run), with one caveat… if your database was originally created with a version of MySQL prior to 5.6, the first change will need to lock and copy the entire table, at which point it will be updated to 5.6. The changeset that alters the value_complex requires a full column copy and can take take 1-2 hours to run… it reading the docs i…

Are there any plans to partition Obs table vertically. I mean, if value_coded, value_numeric, … can be stored in separate tables, that would really ease up the burden on Obs table.

@owais.hussain but that would make querying them via SQL a nightmare

@ssmusoke writing queries will be a bit complicated, but the end user won’t have to wait for endless hours to pull reports, especially the ones using grouping.

I’ll see if I can cook some numbers to support this. First of all, is the distribution between coded/numeric/text even considerably even to entertain the idea.

Oh yes joining to the obs table today is already very difficult, breaking it down further adds up to 4 additional joins per loop through the obs table.

@ssmusoke I performed a primitive test on our largest implementation. First the distribution of obs table (16M rows) by data type (I’m skipping complex and drug, being negligible): 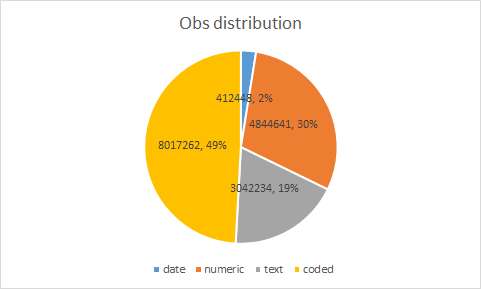 Here’s a query, which gives a count of patients on TB treatment, having a positive GeneXpert test, but don’t have a CAD4TB Chest X-Ray score above 50. No real use, but just a query using both coded and numeric obs.

First query took 1.781 sec vs the other one after partitioning) which took 1.046 (not including fetch time).

The tables were created as copies, so all indices and keys were copied as is.

Is it possible to collect more data on this from several implementations, especially using DBMS other than MySQL?