The Pull request for location mapping UI was merged yesterday. Thank you @jayasanka and @akshika47 for reviewing and merging.

I found that the ADX download option (in Run Reports UI) is not working in the current version of the DHIS Connector Module. It throws a 500 Internal server error.

I created 2 new pull requests for Upgrading run reports functionality and automation functionality. Still, the Pull requests are in draft mode. I need to do recheck it before making it ready for review.

@akshika47 @jayasanka Could you please check it and update the issue state.

Added unit tests to the previous Pull request. Now it is ready for review.

Hi @akshika47 @k.joseph, Basically my plan is to create the privileges first, so the roles can be created later according to the user requirements. We can secure the Different pages and options in Module UI with these privileges. So these are the privileges I suggest for the DHIS Connector module. View_Data Push_Data Manage_Metadata Previously I thought to create a new privilege for Import/export options. But in a previous meeting @k.joseph suggested to include that too in the manage_metada…

Also, I tried adding ‘automated location mapping’ to the automation UI. When an automated mapping is running, it fetches the available organisation unit of the mapped dataset and push data to those org Units from the respective locations taken from the database. Here’s a small preview.

This is the automation UI that I have designed now. But I noticed that with this design, users can’t see which locations-orgunit mappings are available for the selected mapping. In the run reports UI, it automatically shows the available location-orgUnit sets but here it doesn’t.

So do we need to show the available location-orgUnit sets in here also? Or is that not needed

Hi @jayasanka @akshika47, I was able to upgrade the Automation(Scheduling) functionality of DHIS Connector module integrating it with Automated Location Mapping, so the users don’t have to choose the locations and org. units manually. Here’s a small preview.

With the automated location mapping feature, the database of module will be changed a bit. Unwanted columns of both tables used in DHIS Connector Module will be removed.

This may cause an error saying Unable to update data model using liquibase.xml after updating the module. I found the solution for this issue from here

This sometimes happens with OpenMRS modules. Ideally liquibase existing changesets should never be modified and if there is a modification required, it should be added as a new and subsequent changeset.

Liquibase makes entries in table liquibasechangelog to keep track of executed changesets with a checksum/hash. When changeset is modified the checksum is found different and this error is encountered.

In above script we removed all tables created by previous version of team module, and also deleted all liquibase entries made by this module to allow module installation start from point zero. Offcourse, if it were production server, we never had deleted the tables. Also we never delete liquibase entries to avoid already executed changesets run again (this sometimes can also cause failed installations)

Deleting every row related to DHIS Connector module in the liquibasechangelog fixed the issue. Sometimes you may need to delete the report_to_dataset and location_to_orgunit table too

Hi. The user access control system is almost completed now. I sent pull requests for adding privileges to all the pages except the import/export pages. All the details and screenshots are posted in this thread: DHIS Connector Module - User Access Controlling

These are the Pull requests for adding privileges:

@jayasanka @akshika47 Could you please review and merge these. Thank you

These are the Pull requests for adding privileges:

Hi @dkayiwa, Could you also please review and merge these pull requests. I have added the pull request links to jira as well. Thanks in advance

@piumal1999 did your primary mentor take a look at them?

@piumal1999 @dkayiwa I will review these and merge them before the end of the day.

I have updated the module wiki page. https://wiki.openmrs.org/display/docs/DHIS+Connector+Module

Created the final demonstration video for the project. 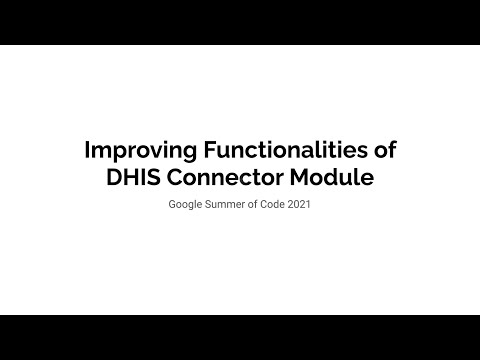 And also create the final document draft. Could you please review it. https://medium.com/@piumal1999/improving-functionalities-of-dhis-connector-module-4492fb674d94