The objectives of this project are,

3.  UI changes to reflect above functionalities

2.  Module should be able to perform patient match with each and every record with it self despite of the output from prior runs (In simple terms not an incremental patient matching) [July 1, 2017 - July 12, 2017]

There are a some milestones you could call out here:

This is be a relatively small change (i.e., just exposing an option to ignore date of last run), so hopefully won’t take too long to implement.

In test-driven development (what we should be striving for), tests should be written before code.

Hopefully we’ll be getting in some code review along the way.

Thank you for the feedback @burke:slight_smile:. I will update my project plan accordingly.

I have a confusion regarding the patient matching process. If I do a match with a certain strategy “A”, I will get possible duplicates to be merged as in the following image. 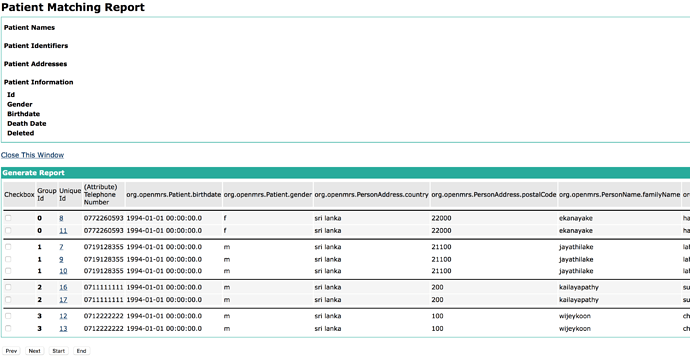 The confusion is, in the incremental matching process, given that we ignore the merge operations and carry a match with the same strategy, should the module display those possible duplicates or should it ignore those patient records as they were matched earlier, back then in couple of days? (assuming that no patient is added or updated)

According to my perspective those records should not be considered in the incremental patient matching process. Am I right?

I would expect to see any new additions alongside previous results – i.e., each iteration updates a single set of results rather than creating a separate result set. In other words, if a patient matching strategy is run daily for a month, there would be a single set of results for that strategy that may change over the month as patients are added/updated/merged, but the user would not have 30 distinct result sets to navigate.

Some “open source” logistics. I think you may already be doing these things, but just want review:

4. If there are couple of old reports related to the strategy, (? what)should be prompt to user asking which report is considered as the memory for the next run.

I’m hoping we can support incremental updates as seamlessly/intuitively as possible. If we’re going to support more than one output for a strategy, then we would be forced to make the user choose between updating one of those reports vs. creating a new one.

It might be better to separate the output from running a strategy from the current “report” – i.e., making a “report” an export of the current state of a strategy’s output while maintaining only one output per strategy. In this case, the one “output” of a strategy would be interactive (let the user confirm or reject matches) and a “report” would become a read-only artifact.

My exams are ongoing, until the end of this week.

That is why in these couple of days I couldn’t give my full contribution to this project. I hope you understand

Thanks for the guidance and I have already created a ticket for one particular task PTM-82. As I mentioned in my blog post I’m currently struggling with that task, and today I asked help from the community and @dkayiwa is helping me to figure out the problem.

This one because as, in our chat with Dr. Shaun and Andrew I thought user will be asked to select a starting point for the next run. Sure I will change it then accordingly.

PTM-82 ticket has been fixed. It took little longer as I had to refactor the OpenMRSReader.java class and few other classes as well. PR: https://github.com/openmrs/openmrs-module-patientmatching/pull/34 Would you able to review this?

I have already completed two main parts of the Patient Matching 2.0 project. The two tasks are, PTM-82 PTM-83 PR: https://github.com/openmrs/openmrs-module-patientmatching/pull/35 I am currently working on PTM-84. Which I believe to be the last biggest part of this project. The main target of this task is to perform patient match with two datasources. For the incremental patient matching it is necessary to have two datasources, one is for all the patients and the other one is for the patients that are fetched considering the date changed and date created. I have to implement some methods and change the code to perform this because the current version only supports for the deduplication of records when dealing with a database.

Up to now I have completed most of the tasks that I have included in the project plan. PTM-82 - Load patients for the incremental matching PTM-83 - Generate and save reports in incremental patient matching process PTM-84 - Perform patient match with two datasources

This is how it looks like in the application after these changes.

Run a report with the configuration name "test1"

created report.png968×184 16.7 KB
A report will be created adding the incremental-report text to the configuration name.

Added a patient which shows a match with an existing record

The same incremental-report-test1 report will be updated.

new patient added which does not match with existing records after ran the report no change.png1170×208 25.8 KB

Then there will be no changes in the report.

Report will be updated as the following image 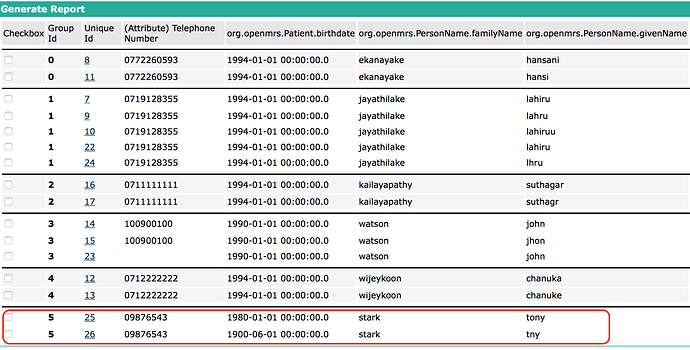 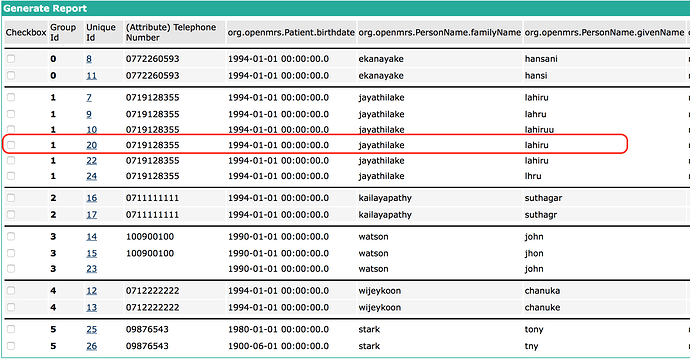 Every changes happen to the same patient matching report in this case it is incremental-report-test1.

I have already made my 4th PR: https://github.com/openmrs/openmrs-module-patientmatching/pull/37 The above PR is to allow the user to select or deselect whether the run should be incremental or not. 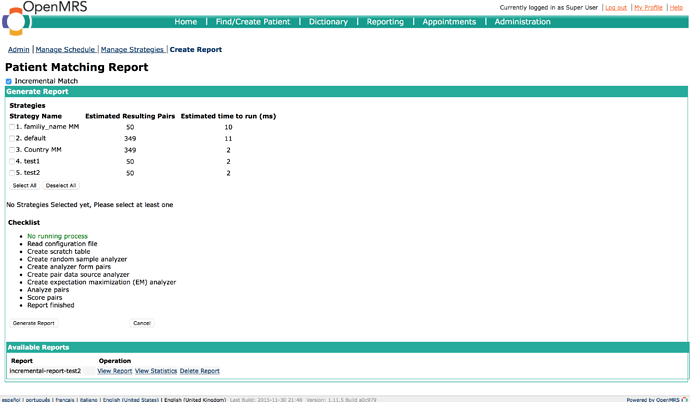 By default the Incremental Match checkbox is checked. User can select/deselect and run the match.

I have completed the PTM-86 and the PR can be found here. This task is to update the report whenever the patients in the report are updated in a way that those patients no longer exhibit matching properties with the rest of the patients.

For example, Suppose there is a matched pair (say patientA and patientB). User updates the patientA in way that patientA does not exhibits matching properties with patientB. Then the matched pair in the report will be removed.

More details about this can be found in my last week blog post.

). I just created the last pull request - https://github.com/openmrs/openmrs-module-patientmatching/pull/41 which is for the PTM-88 issue.

To give a brief summary, I was able to complete every task mentioned in my project plan three weeks before. (Mainly incremental patient matching) Since I had more time I created two issues PTM-87 and PTM-88 and completed them as well.

PTM-87 : to merge patients in the patient matching report PTM-88 : to declare matching records in the report as non-matching patients. By doing this, these matches will not be considered for the next report generation process.

I will give you a full update ASAP