database driver class was not found

after installing the SDK I got a database driver failure, look at the attachment 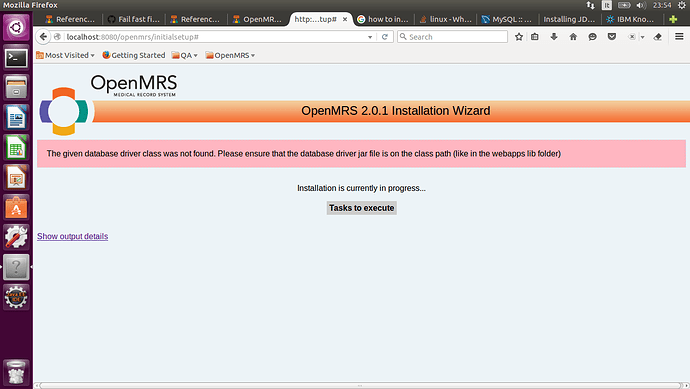 The latest openmrs platform release fully supports version 5.7 of mysql. Which installation type did you choose? Simple or Advanced?

@domenico, any reason you have “CLASSPATH= /usr/share/java/mysql-connector-java-5.1.28.jar”? Is it a system variable? OpenMRS comes with a bundled java connector so the custom path you have specified isn’t needed…

Yes, it is a system variable. I noticed that you have the JDBC library in the SDK and in principle the classpath wouldn’t be needed, but I had the problem show in the screenshot, thus I configured the system CLASSPATH.

@domenico, that’s strange. Are you still able to reproduce the issue? Could you please create an issue for the SDK project and paste the server logs you get in console?

Ok, but I can’t find any log file, I searched recursively in the openmrs folder without getting any file of interest

But it must have failed before it created the file, which is strange.

The logs are also printed out to the console when calling openmrs-sdk:run.

Said that I’ll open an issue in Jira with the log, I’m attaching the log right now (Maybe you discover that is useless to open an issue) openmrs.txt (12.8 KB)

@domenico, the attached logs do not show any error. Did you try opening http://localhost:8080/openmrs ? Please do that to log the error after startup, if it is still there…

Thanks @domenico. Server logs do not contain any errors, which is strange. Let’s continue investigation on the issue you reported. I asked you to attach 3 more files.