@dkayiwa would you know why the tests are not “seen” by Bamboo? 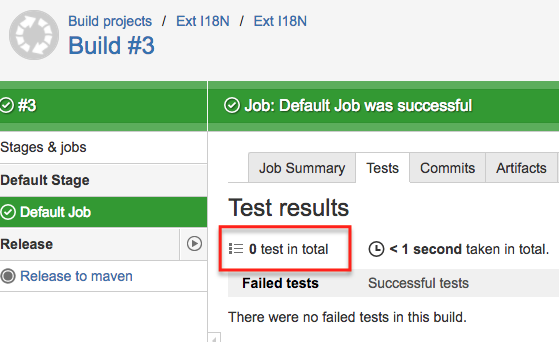 The log is what you need to look at: https://ci.openmrs.org/browse/EI18N-EI18N-RTM-6/log

Which i think is this snapshot dependency: https://github.com/openmrs/openmrs-module-exti18n/blob/master/omod/pom.xml#L16-L20

Yes I know the release process is not yet ready to go through, but that was not the build I was looking at.

My question was for build #3, unit tests are run, but Bamboo fails to report them.

Are you referring to this build? https://ci.openmrs.org/browse/EI18N-EI18N-RTM-3

But that build is green.

Sure, just wondering why tests are not being reported by Bamboo whereas if you look at the log for that build, tests have been run.

Also @dkayiwa as I was looking at launching the first release of Ext I18N, I looked back to what was done with UI Library recently as an example. And I believe that the env. variables were incorrectly set then since the release job produced UI Library version 2.0.6, and then set the next dev. snapshot to 2.0.6-SNAPSHOT. It should have been 2.0.7-SNAPSHOT. See https://ci.openmrs.org/browse/UIL-UIL-RTM-378/log