Not long ago we kickstarted the conversation of moving Bahmni codebase from AngularJS to React. While React is a decent choice to keep it modern and attract more contributions, but at the same time it is “yet another framework” and at some point it will suffer a deprecation (just like AngularJS); perhaps there’s simply no long term strategy for frontend frameworks as of now, “unfortunately”. Our initial thoughts were to make the overall rewrite framework agnostic - while still using React i.e.

This will limit the blast zone, and allow more independent rewrites of critical components in the future, rather then having to rewrite the application as a whole again.

We also evaluated the amazing OpenMRS 3.0 MF work that happened in past few years and seems it went though similar journey. So instead of duplicating the efforts and (future) problems, our proposal for Bahmni would be to piggiback on overall decisions and frameworks used for OpenMRS 3.0 MF and extend features on top it. 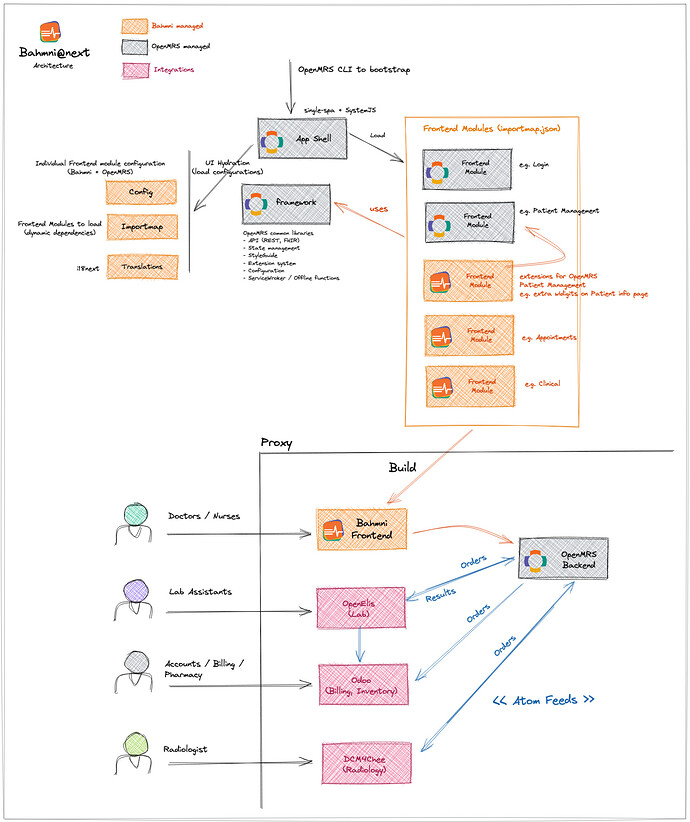 We will talk in a bit more deatils in the upcoming PAT call on 24th Nov 2021 and would be happy to hear your thoughts and suggestions.

@florianrappl @bistenes @jdick it will be great if you can join the call. If the time does not work for you, we can figure out another time.

I would also be against rewriting any component of bahmni from Angular to React. I would rather concentrate on bahmni’s contributing to the OpenMRS 3 architecture to make it as flexible as it can, to accomodate components, not written in react, but that have been comfortably used in production, for years. After all, when i proposed the Micro Frontends Architecture to OpenMRS, one of my arguments was that we need an architecture which accommodates the investments already made by different groups in various technologies. Of course am not saying that we should just mix languages because the architecture allows us to, but simply accomodate them, when we find ourselves in such situations.

For any form of refactoring, am all for it. But rewrites, i would be careful to avoid falling into the trap that Justin talks about here: Why do we fall into the rewrite trap? | Justin Fuller — Software Engineer

For new features, it makes sense to implement them as OpenMRS 3 frontend modules in React.

I totally agree with @dkayiwa. I don’t see the point of rewriting Bahmni Apps in React. @n0man why not just slicing it, why the Reactification?

Your feedback and challenge on React and Rewrite is fair and I will let you read this great post and comments on moving Bahmni codebase from AngularJS to React.

In addition here are my thoughts…

Firstly, I don’t think the focus here @mksd is to Reactify the code to make it look current/modern. Neither the current code state is ugly that it could be solved with just refactoring to make it read better. The rationale for slicing was to uplift the overall fronted architecture and technically speaking - just pure slicing of current codebase for MF is possible but I wouldn’t underestimate the efforts and I would challenge on the value it would provide as-is with current stack?

While Joel Spolksy 20 years old essay is still fair to indicate that “Rewriting the code to keep the same functionality is the worst strategic mistake that an organization can make” - But at the same time there are situations where attempting an incremental rewrite is comparatively a better approach. Here are few important question (which are inter-related) that would justify a rewrite and should eventually pay off for software that is planned to be maintained for dozens of years like Bahmni…

With no emotions attached to React, for me is just one of the current mainstream frontend frameworks with a larger community and perhaps its more of piggybacking OpenMRS to have consistency for contributors. One of the thought was to make Bahmni completely framework independent e.g. using a web standard like web components, however to use it productively we might still need to use a framework - hence, have the same issues. And no-matter whatever we use now, we may land-up in the same situation as you rightly called out @dkayiwa, i.e. the current mainstream would suffer depreciation sooner than we can estimate.

Lastly I would argue on having too may frontend stack to be supported @dkayiwa. Perhaps micro frontend anarchy would be a maintenance disasters if there aren’t any plans for standardization and consistent approaches. I know @dkayiwa you intent was more towards wrapping currently invested codebase to be used in the new Architecture - I just wanted to call out the future consequences.

These are some of the great pointers for us to discuss in the PAT call tomorrow.

I’m currently in vacation but this seems both so exciting and so important; I will try to attend the PAT call today.

Hi @n0man, Thanks so much for your review & demo on the PAT call today. It’s clear you’ve put a lot of thought into this and you’ve really taken the time to review the existing 3.x frontend infrastructure. It was really exciting to see this as well as the prototype you set up!

I have 3 follow-up questions to clarify:

Thanks so much. Looking forward to further discussions on this! (cc @angshuonline @gsluthra)

At the risk of sounding blunt or downright oblivious… I was under the impression that Bahmni-core created substantial barriers to adopting the 3.x architecture. So I thought that substantial re-work of Bahmni/Bahmni-core was needed before 3.x was even an option for the Bahmni platform. I guess this is not the case?

I think this is a different issue, one could certainly use our frontend framework and Bahmni Core. It’s just that for Bahmni most or all ESMs would state that Bahmni Core is a required backend dependency, thereby making them unlikely to ever be used on “the OpenMRS side” (so to say); and that’s because in O3 the stance is FHIR first + backend as thin as possible.

@grace yes, eventually we would require assimilation on the backend side, but as @mksd mentioned to leverage frontend f/w, its not mandatory.

I think in a meeting with @ibacher we talked (and demistified) about Bahmni core backend module - reasoning and needs. If you remember, we also discussed about us thinking

Now IMHO, all of them are needed (and alignment amongst broader groups) to effectively move together and collaborate on shared/re-usable features/functions, forming consensus (if not anything but on principles). Whether we can tackle all of them, I have no clue, but we are happy to try!

I would even settle to use OMRS or Bahmni REST APIs to start with, while we figure out a path to “perfect-ness” - if each component clearly says out dependencies and if these dependencies are manageable enough - its still a win. Eventually birds of same feather will flock together

Sorry I missed the meeting about this. I don’t check Talk often and so just saw this thread. Glad we got to talk about it at the conference. This is a really exciting project and I hope we can find synergistic approaches.

It would be great to get feedback from the bahmni team for this RFC: RFC: Make React the Primary Framework by FlorianRappl · Pull Request #32 · openmrs/openmrs-rfc-frontend · GitHub