Hi All, I cannot get Atlas module working in both demo application as well as in the standalone application. Any idea ? 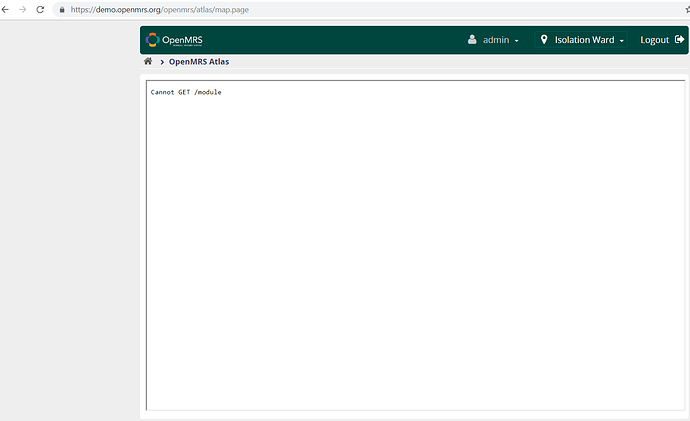 Its been broken for a while now. The GSoC Project Atlas 3.1 that I’m currently working on aims to bring it back up.

If you’re trying to connect to a local instance of Atlas that you’re running, through the module, then you should probably look at AtlasConstants.java of openmrs-module-atlas .

@heliostrike Thanks for the information. I was looking at this feature https://issues.openmrs.org/browse/ATLAS-169 and was planning to start working on it. As per the current state of your project do you think i can setup a atlas server locally and connect the module with that ?

The module is broken, and won’t do much beyond displaying the screen (and making non-existent API calls), so you could just test in the web browser.

To set it up, you may want to check out the posts on the Atlas 3.1 Talk page from 63 to 66. I currently run the server using nodemon.

@heliostrike Thanks… i will try that and let you know

@heliostrike Do you think i can use the Atlas server in https://atlas.openmrs.org/ to connect the module ? If so can you send me the details of it ?

@dilantha as @heliostrike mentioned, the atlas module is currently broken, and he’s working to get atlas working again.

It has been broken for almost 2 years.

I think https://atlas.openmrs.org/ is already connected to the Atlas module as seen here. But the module’s functionality won’t be working (besides display the webpage on the canvas). We’re working on fixing it.

I’m assuming you want to work on ATLAS-169. To setup the environment, I followed these steps. This should start up the node server, and you can now build and test atlas from the browser. Burke described how he set it up using docker too.

@dilantha, I’d ask @burke’s opinion if it’s a good ticket for you. I don’t know how complex the ticket can become, and I don’t want you to spend time on something if you won’t be able to progress

I’d recomment you use atlas-stg.openmrs.org for any of your tests, and not use a local server.

@cintiadr Thanks. That would be great. Let me know if there is any other ticket that i can work to get atlas back to life

@cintiadr Were you able to check on this ?

Which actions are you waiting from me?

I’m not involved on GSoC, and I’m not following closely what’s being developed. Did you contacted Burke as I recommended?

@cintiadr Thanks. That would be great. Let me know if there is any other ticket that i can work to get atlas back to life

@dilantha, have you managed to get a development environment set up? I find it easiest to use Docker.

With a staging version of openldap running locally,

@cintiadr Sorry i misunderstood your last reply. @burke Thanks a lot for the information. I will follow these steps

@burke @heliostrike Do i have do edit the docker image as well ? i could not find it in the docker hub. I get this error when try to docker-compose. I have done a docker login

Pulling openldap (osixia/openopenmrs-contrib-atlas_defaultldap:1.2.4)… The image for the service you’re trying to recreate has been removed. If you continue, volume data could be lost. Consider backing up your data before continuing.

That’s a strange error message. The docker-compose.yml for ldap-stg loads the 1.2.4 tag of osixia/openldap from Docker Hub.

It looks like your docker-compose.yml for ldap-stg is malformed.

@burke Thanks… You were right. I have accidentally modified the docker-compose.yml and its fixed now. Im on windows env so i will have to redo the nodeenv script for windows. Working on that now