Adding new languages and removing duplicate ones in Transifex

As of now there are a lot of pending languages to be added in Transifex which includes some majorly spoken languages like Bengali.

Onto this I’d like to add to the fact that multiple duplicate languages exist in Transifex as of now. This duplication is usually caused due differences in same language over different regions. However, some languages like Hindi and Russian do not vary over regions like English(US,UK and Australian). These specific languages like Hindi(India) and Russian(Russia) can be removed. This would be a wise decision at the moment instead of distributing the contributions made by contributors to the same language over period of time.

I was seeking permission to add/remove them or if the authorities think this is something that should be done by them, then I’d like to inform them. 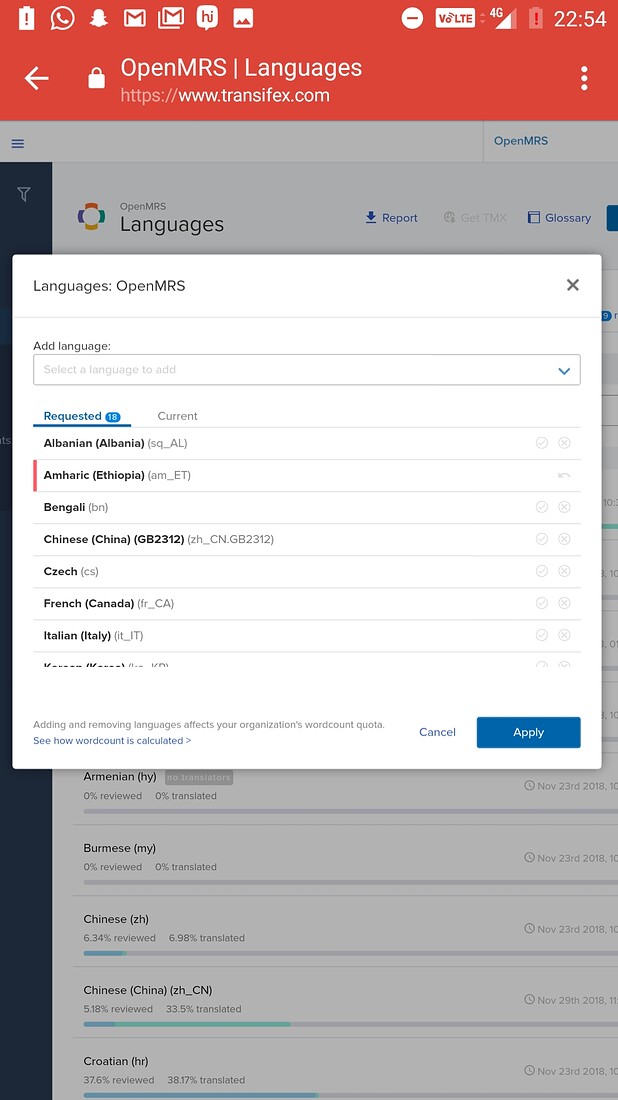 Many of the requested languages duplicate existing ones. We already have Albanian, Portuguese (both Portugal and Brazil), Italian or 2 Chinese languages, for example, and it’s not the full list. So instead of blindly approving, we need to take a look at those which are already in the process of translating. We already have some confusion because of two Hindi or two Russian languages and we don’t want to mess around with other ones

I have no idea why Transifex has so many duplicates, they cause lots of problems sometimes.

@lana I have updated the thread, please have a look

@lana I guess it’s due to fact that Transifex allows to have different translations for the “base” language itself and its national variations. Some of them are not really needed (e.g - pl, which is just polish, and pl_PL which is polish - Poland) but others do make sense (like variations of english [think of color vs colour] or portugese).

@anuar2k Yes, Transifex does allow variation of languages but all languages are requested to be added. So, it’s really in our(OpenMRS) hands what languages to provide for translation.

The inessential ones can be removed to avoid distribution of contributions.

These translating issues aren’t really OpenMRS’s fault, is it? I’d assume something would have to be worked out on Transifex’s side. As @anuar2k mentioned, there’s already some differences in languages, for example Chinese has both traditional and simplified. Is there a pressing need to delete those repeat languages?

@wzcoding I am not saying to delete all duplicate languages (please read the thread again). I know there are language differences in languages like English. What I’m trying to say is we should remove languages that are save irrespective of the region where they are spoken like Hindi. This will avoid spreading of contributions by contributors.

I hope you have got my point

Ok. Thanks for the clarification. I hope this gets worked out soon.

Maybe two hindi languages category are justified because I have heard about ‘Fiji Hindi’ too, which is different from Indian hindi. You can search for ‘Fiji Hindi’ to get to the wikipedia page or follow this link for more details: https://www.indiastudychannel.com/experts/36103-What-is-the-difference-between-Fiji-Hindi-and-Indian-Hindi.aspx

I still don’t think so it’s necessary as the script is same. Both languages are written in the same way. There is no difference in the text. The link you mentioned tells that only the pronunciations differs.

Does it make any difference how a person reads the text in his/her mind? The only thing that matters is that he or she should understand what’s written, that’s the meaning of translation

It’s not just pronunciations but alterations in sentences too. As I said, visit the wiki pedia. They have examples of difference in Fiji Hindi sentences and standard hindi sentences. Link:https://en.m.wikipedia.org/wiki/Fiji_Hindi

However, it still doesn’t make sense to have two categories as standard Hindi is understandable to wider population (including to those who speak Fiji Hindi)

This was my point. I hope it’s clear now

But what’s the point, they are same.

Please read above. Basically they are very similar but not the same, standard Hindi is understandable to wider population, they were talking about how there should just be one version to make translating OpenMRS easier.