I fork & clone openmrs-contrib-android-client project. How to its build?

If on windows, it’s ./gradlew.bat.

This assumes you have the android-tools set up properly.

Thanks Robby O’Connor, As my starting point I like to work with introductionary issues.When I work with that issue from where to find the source code related to that issue. What I do its start?

As my starting point I like to work with introductionary issues.When I work with that issue from where to find the source code related to that issue. What I do its start?

Usually tickets don’t contain code snippets and don’t show where in the code the bug/feature exists relying on the developer to find it by themselves. The android project does follow the MVP pattern so it shouldn’t be too difficult to locate the code. If you need any more help, share the ticket either in this thread or on the Chat and I can help you get started.

I’ try that project build. But it failure. How to its fix. 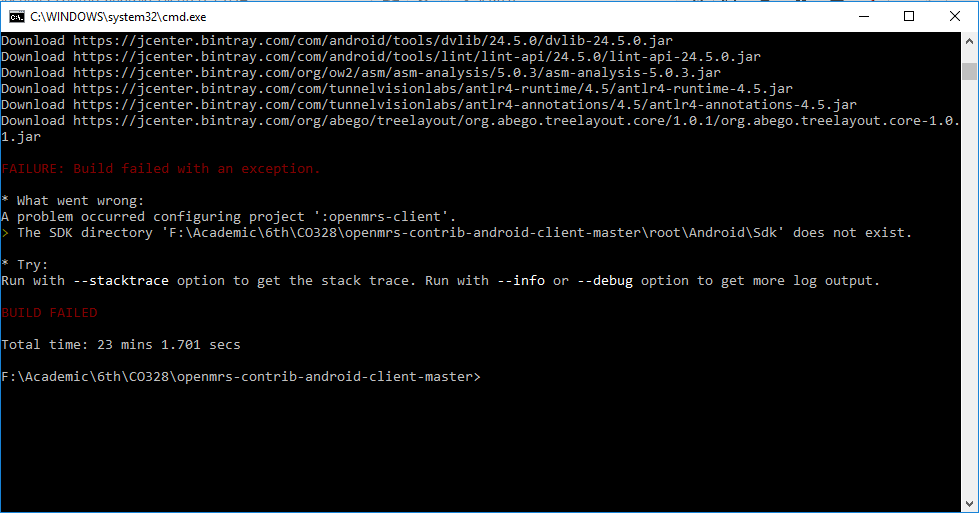 I believe you have to include the android SDK in the openmrs-contrib…\root\Android\sdk folder if you’re going to run from CMD.

I’d suggest installing Android Studio and building from there. It comes with an emulator and you can immediately send the apk to your android phone.

You don’t have the SDK installed – for me the SDK is located at ~/Android/Sdk/ and set up the sdk.dir property.

A file named local.properties will be generated when you import the project into Android Studio. That should point to the sdk directory – for me it’s /home/rob/Android/Sdk – I’m on Linux.

Hello @Yusuf Karim, I would like to working on this issue. I tried to login with my OpenMRS id and inform them about my presence for this issue. But I am unable to login. It says “wrong username or password”. How do I start?.

Can you share the server you are connecting to as well as the username and password you are using? The default values for those two fields are usually (username: admin password: Admin123).

I not created the help desk for that.

Oh, I see, I thought you were talking about logging into the android client. The helpdesk will grant you access eventually to access Issues.

Read the big banner at the top of the issue tracker

It’s meant to stand out…how do so many people miss this?! Short of making it blink and scroll – I can’t make it stand out anymore