Just to make sure, is this the problem we are facing: Although we can get all the imaging procedures in radiology from the CIEL Concept Dictionary, it has not separated them on the basis of imaging modalities. (For example, "163040" "Chest, abdomen and pelvis with contrast IV (CT)" "Radiology/Imaging Procedure" "N/A") So, we have to find a way to assign imaging procedures to modalities.

yes that is one issue. another is CIEL is an example dictionary. Not every OpenMRS implementation uses it. How do we add a catalog of imaging procedures like the ones mentioned in the wiki page. @judy anything you’d like to add ?

This issue occurs because not every OpenMRS implementation will import this dictionary from the CIEL MySQL Database?

@teleivo A request: Can we chat on IRC or any real time chat just for about 15-20 mins? I have some doubts that need clarification and the sporadic communication on talk is too slow. This will really speed up the writing of my proposal.

Not related to mysql. They might have their own concept dictionary

What is your IRC nickname @teleivo ? I am currently waiting in the channel. Edit: When can we talk? Edit2: Please reply to this post whenever you are available on IRC so that I can join.

I am running out of ideas as to how the assignment of modalities to procedures can occur. @teleivo Can you point me in some sort of direction towards a possible solution?

@venkatp1997 dont worry about the dictionary . We should be able to do something the reference module does . The implementer can use CIEL or another dictionary of their choice. What you do is create a global property that allows the user to specify the modalities available . For example , in the reference application , to change the diagnosis list you go to Admin > Global Properties

If you checked this concept in the dictionary , then it appears as below 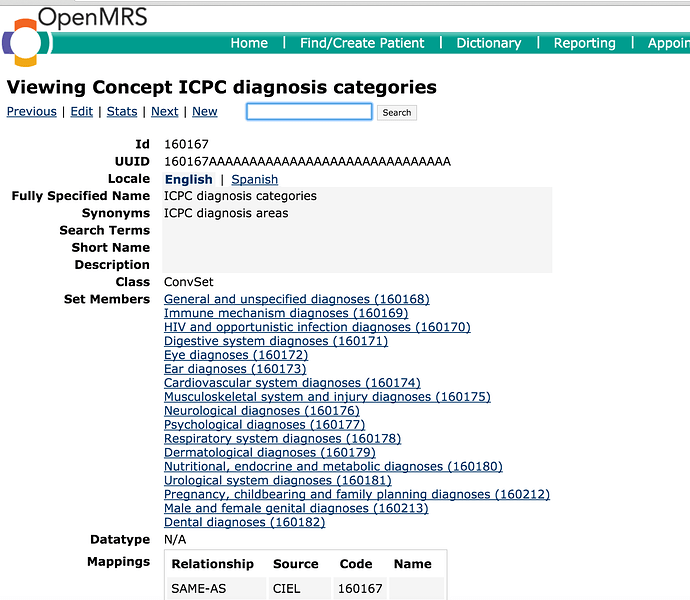 FYI , anyone using CIEL will have a class of ‘Radiology/Imaging Procedure’. All you need to do to load CIEL is get the sql and access and import it to your mysql

Therefore your code can search for this class in the dictionary , and also allow configuration as part of the global properties

Hope this is clear

So, no database is required for this project ?

@ulrich what do you mean by no database ìs required ?

I have understood this project ever since, and did a UML modelling yesterday coupled with the fact that I master the use of concepts in OpenMRS. When i read jude’s comment i feel like we shall just use concepts to do the mappings or that is not what @jude is trying to showcase ?

Alot of issues came up recently that I had to be out for a while. I am expecting to be done with a draft proposal by noon.

@ulrich yes @judy is trying to point out that we will be using concepts. procedures are/will be stored as concepts. it might just be that there is a gap, something missing for us to connect them to our modalities. but thats something will see later.

at all students, please dont forget to submit your completed proposal at https://summerofcode.withgoogle.com/

I just shared the draft proposal with OpenMRS, please @teleivo, @judy please have a look at the screenshot under the Implementation part of the proposal and comment

I have completed the second draft of proposal. Please review. @teleivo @judy

sorry but I will not do a 2nd review and I have reviewed yours already + chatted with you on irc. please submit your final proposal.