Sure! I will surely do it. Thanks for the point out.

I followed this link Tags · openmrs/openmrs-distro-platform · GitHub and it still reflects platform 2.5.7 though I have confirmed version 2.5.8 was released 5days ago. I think that is where I confused myself.

Great work @jwnasambu! Both those Wiki pages look good - thank you for doing this so expeditiously and efficiently. I just added the same notes as above w.r.t. scope of this release.

For release date - I’m thinking anytime in Nov or December; just whenever we can that is before the end of 2022. How does that sound to you Juliet?

Thank you so much @jwnasambu!

@dkayiwa, @ibacher kind help please! I have began releasing modules with reasonable changes though I haven’t succeeded on any of the 3 that I have triggered. I have tried out the Provider Management Module and Appointment Scheduling module but this is the error am getting

Kindly how can I fix this error? besides the version tag is updated even when the release failed on the way. Do I need to delete the tag and begin the release a fresh?

I’m having a different error when I try to release the App Framework module. When I run the standard build on CI, it builds successfully, and all the tests pass, but when I run the release job, the test fail, with this error being reflected

on this link App Framework - App Framework Module Latest - Release to maven 295: Build log - OpenMRS Bamboo. I once thought the explanation on this link Problem Releasing APP-UI module could be of help but I was wrong.

I have added JAVA_HOME=${bamboo.capability.system.jdk.JDK 8} to the environment variables of those three CI plans. Run (not Rerun) the plans again.

After running the plan do I need to release again or that is all? Besides, am facing the same problem with another module that I have tried to release. I desire to modify the bamboo job with JAVA_HOME=${bamboo.capability.system.jdk.JDK 8} but am a bit stack with the path to follow in order to achieve it. Kindly do I need permission to do it?

After running the plan do I need to release again or that is all?

The release did not succeed/happen.

To be honest I didn’t re-run the release again because I already had a tag of a new release created e.g. Appointment Scheduling/tags. My assumption is when I release again it will create another release of 1.18.0 which I believe is wrong. The only would be solution if am to release again(in my own thinking) am to delete the tag on the repository then release afresh

That one was released successfully: OpenMRS Add Ons

Thanks Daniel. Am struggling with this error

when I try to release some modules e.g. Metadata Mapping Module. Kindly how can I go about it please!

In the error log, i found this: [ERROR] Failed to execute goal org.apache.maven.plugins:maven-javadoc-plugin:2.10.3:jar (attach-javadocs) on project metadatamapping-api: MavenReportException: Error while generating Javadoc: Unable to find javadoc command: The environment variable JAVA_HOME is not correctly set. -> [Help 1]

Can you Run (Not Rerun) the plan again?

@dkayiwa I kindly need your help please! I have tried releasing the htmlformentry module but am having failing tests which may be as a result of a broken commit added at some point. Kindly how can I go about it?

@dkayiwa, @ibacher am trying to release Reporting UI module but am stack with the below error.
[ERROR] mvn release:prepare failed. Attempting to do a release rollback. [ERROR] mvn release:prepare failed, scroll up the logs to see the error. release:rollback was attempted. Delete the tag from the repository (if it exists), check if the SCM tag is a ssh and not http and try again. even after updating my task Environment variable with JAVA_HOME=${bamboo.capability.system.jdk.openjdk-8-jdk} as reflected on the screen below 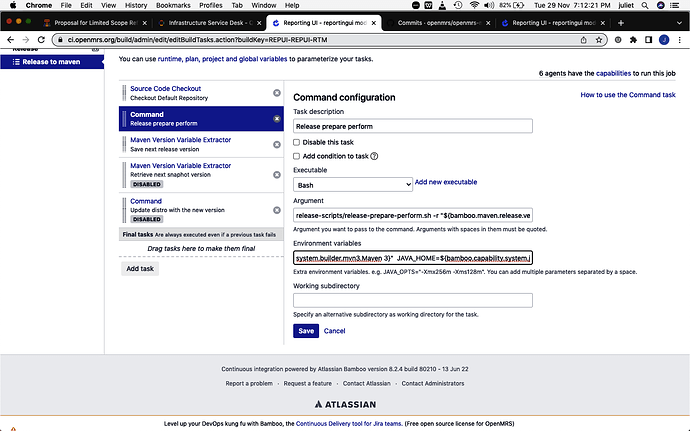 Kindly how can I go about it?

Is is always good to include a link to the CI build that you are trying to run.

You are right! kindly this is the link to the CI build Reporting UI - reportingui module 1974: Build result summary - OpenMRS Bamboo

I was releasing 1.11.0 but it could rollback to 1.10.0 version something which is confusing me. Thanks for the follow up

@dkayiwa kindly I supposed I need to delete the tags to precede with a release but I have no permission.