Yes, by my analysis there are 58 concepts that are missing numeric “PIH” mappings in that provided database snapshot. I’ve detailed this out in another message internally @ball . We can hash it out there.

Since the last post on this thread there has been a lot of discussion here: PIH dictionary import · Issue #45 · OpenConceptLab/ocl_issues · GitHub

Update today from our OCL call:

I’d love to succeed at making OCL tooling useable for you; the earlier in 2022 the better!

The next step is for @mseaton to do another pass with the subscription module. @mseaton/@mogoodrich does that sound about right?

Yes, I have this on my radar @grace and will likely do this in the coming week.

Update here @grace - testing went well and I was able to confirm that the concepts exported from OCL matched those from our existing system, with the exception of a few known areas that we can manage separately. Next steps for us are to step back and evaluate the next phases of work to allow us to fully proceed with OCL adoption. Our aspirational goal is to achieve OCL migration this quarter.

Thank you @mseaton for that great update!! Also delighted to see your comment in GitHub on the same.

So, let me make sure I understand this: The next steps for achieving OCL migration this quarter are:

@mseaton @ball is this about right?

The remaining steps I have to get OCL ready for PIH to manage their dictionary within OCL:

@mseaton and @ball may have others.

Thanks @grace and @burke . Some high-level steps:

There is likely stuff I’m missing, but these are some of the main items on my radar.

I’m curious about whether this is correct

For now, i.e., without the ability to customise concepts, this seems like it’s the correct thing to do. Otherwise, if we converted those concepts directly to CIEL concepts there would currently be no way to customise them at all. Once concept customisation becomes a thing, it might be worth rethinking this.

There are some other considerations here:

Similarly, CIEL has some concepts that map to PIH concepts, but all PIH concepts now (in OCL) have a SAME-AS mapping to a PIH “gold” code. Most of those mappings would be lost.

is it easy to convert this “reference” to a new concept in our source that points back to the original concept by shared mappings?

Not easily. The problem isn’t really creating a concept from an existing concept or adding a mapping to it to point to the original concept; it’s all to do with the other mappings (SAME-AS, but also Q-AND-A, and CONCEPT-SET). First, when creating a “clone” of a concept, we need to create new mappings from that concept to all of the concepts the original concept was mapped to, then ensure than any concepts they are mapped to are also correct. (This is where the cloning feature is stuck). Second, since this would be a change to an existing concept, effort would have to be made to update all the mappings that point to that concept to point to the newly created concept. Neither of those are impossible; it’s just not easy.

This touches on one of the key data model differences between OpenMRS’s concept dictionary and OCL. In OpenMRS, a mapping to a concept is just some plain text that external business logic can resolve. OCL has two kinds of mappings: external mappings which are similar to OpenMRS-style mappings (i.e., they are basically plain-text and not real links) and internal mappings, which are an actual link between two OCL concepts potentially in two different sources.

This is part of the reason why concept customisation is more of our long-term strategy here. A draft of some of how we’ve been talking about doing this can be seen in this very long Google Doc.

The quick hack here would be to give the zip files ordered names, e.g. 001_base_concepts.zip 002_tb_program.zip, etc.

Can you confirm this after our discussion earlier this week @burke and @grace ?

https://openmrs.qa.openconceptlab.org is once again pointing to the OCL staging server, so you should have the latest Dictionary Manager and the PIH source available there.

In February and before making the switch, I expect to do a weeklong side-by-side testing of our current antiquated concept management with using the OCL concept manager. I wish I had a better test plan, but the best test will be using the system.

Before the making the switch, we’ll clean up the following obsolete concept_reference_sources and associated mappings.

Discussion today: Next phase of PIH implementation (before go-live) is to:

One complication is that our dictionary in OCL Staging is out of date almost immediately after we provide it to @burke for upload, and so there is never an apples-to-apples comparison possible between the concepts installed by our latest distro and what is available in OCL to test with. It would really help if we had a way to automatically keep OCL staging up-to-date with our latest dictionary. @burke - thoughts?

My hope is we can get PIH to a place where the “truth” of PIH dictionaries are managed in OCL and flow out from there. I’m not sure it’s worth the effort to try keep a copy of PIH’s dictionary up to date (in real time) within OCL while it’s being managed outside of OCL. That said, during this testing phase, we can get you all in a position to perform your own imports (i.e., I could create a recipe for how to use the ocl_omrs script to generate an import json, delete what’s in OCL, recreate the source, import the json, and then recreate the collection).

That said, during this testing phase, we can get you all in a position to perform your own imports (i.e., I could create a recipe for how to use the ocl_omrs script to generate an import json, delete what’s in OCL, recreate the source, import the json, and then recreate the collection).

This would be very useful - thanks @burke !

In today’s discussion of the mappings, we discussed removal of RxNORM Comb (not Combo). There are 37 concepts in the PIH dictionary with RxNorm Comb mappings. I don’t know why the OCL search doesn’t include all reference sources in the filter. @burke 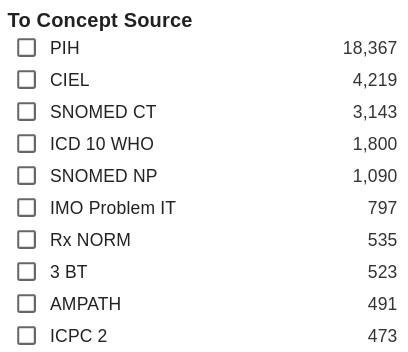 @akanter You suggested removing RxNORM Comb mappings, but if I did this for this example (Cotrimoxizole), there would be no RxNORM* mapping. Is that correct? If I look at the CIEL dictionary, that concept has an RxNORM reference term. I will check all 37 concepts with RxNORM Comb and make certain they have RxNORM mappings before I delete the RxNORM Comb mappings.

First, the RxNORM-Comb codes were CIEL-created codes for multi ingredient drugs. That was because RxNORM didn’t originally have maps for those. They now do. Many of these are already replaced (so in CIEL the PIH 916 concept has RxNORM 10831. Not all do, since some are international or are no longer available. For those, I tend to put multiple ingredient maps or use SNOMED. I think deleting the RxNORM-Comb is fine since they have no external meaning, but updating those concepts with the CIEL maps would make sense.

I’ve documented the recipe I use to import PIH into OCL staging and created a Google Doc to go along with this Talk thread where we can document remaining steps without the formality of an issue tracker (I’ll add this to the list of resources in the original post on this thread).

There are 37 concepts in the PIH dictionary with RxNorm Comb mappings. I don’t know why the OCL search doesn’t include all reference sources in the filter.

The mappings are there if you search specifically for “RxNORM-Comb” (ref) or if you look at mappings for specific concepts like Cotrimoxazole. I think the reason we don’t see RxNORM-Comb in the filter list is because only the top ten most used concept sources are listed. There’s a search feature in filters, but I think it just searches across the subset of filters listed (i.e., only searches within these top ten entries for sources, since it doesn’t reveal RxNORM-Comb).

This wasn’t obvious, but a clear explanation. Thanks @burke for creating the google doc.

The mappings are there if you search specifically for “RxNORM-Comb” (ref) or if you look at mappings for specific concepts like Cotrimoxazole. I think the reason we don’t see RxNORM-Comb in the filter list is because only the top ten most used concept sources are listed. There’s a search feature in filters, but I think it just searches across the subset of filters listed (i.e., only searches within these top ten entries for sources, since it doesn’t reveal RxNORM-Comb).

Update: Today Ellen trialed using the OCL Term Browser to manage updates to concepts - she walked @jamlung and I through 2 examples of her workflow. We ran into a few blocking bugs.

2 main blockers: (@jamlung will you ticket these in oclissues or would you like me to?)

We need a solid mechanism for creating the OCL ID in the OpenMRS/OCL Dictionary Manager (and eventually the OCL Term Browser) for every new concept in the PIH dictionary. Along with @burke, we decided to use the PIH numeric mapping as the OCL ID when we import the PIH dictionary into OCL. This number is unique and currently matches the concept_id on the PIH concept server. But when we move to OCL, there should be an easy way to automatically create/increment the OCL ID with the next PIH value. It would also be helpful to automatically save this as a reference term and concept mapping.

This is essential since we use this PIH mapping for forms and reports.

Does this deserve a JIRA ticket? How should this work for non-PIH dictionaries?

Thanks @grace, I have them recorded and will go over them with Jon tomorrow. We will want to group the issues from yesterday and then I will create the relevant tickets from that.

@ball I am going to talk with Jon about this tomorrow. I am not sure if this is something that OCL should handle or not. We’ll update you on the next OpenMRS Squad call.