If we haven’t already, can somebody write down the steps taken to make this work for openmrs-core so we don’t have to rediscover the steps to enable this for other repositories? Eventually, we should be running Sonar and having it analyze PRs consistently across all community-supported repos.

Eventually, we should be running Sonar and having it analyze PRs consistently across all community-supported repos

we are now talking about using codacy for the static code analysis not sonar. the reason @raff gave is that the openmrs infrastructure is already in too much pain. this was also the reason why when I asked to use sonar for the radiology module I was told that modules cannot use sonar. I then used codacy for the radiology module and I think @raff added openmrs-core to codacy and not sure if he also uses it on another openmrs module.

We will definitely document the necessary steps in a module creation related wiki page.

No, I didn’t either.

we are now talking about using codacy for the static code analysis not sonar.

Sounds good. I was more concerned with having consistent static code analysis of PRs in the community than which tool we use.

I’ve granted openmrs-bot account write access to openmrs-core and have enabled the integration at codacy.com. It had “PR Status” checked by default. There are also options for “PR Comment” and “PR Summary.” I enabled both of those as well.

Does anyone know why there are two URLs for openmrs-core on codacy?

I know that codacy supports importing rules/patterns from checkstyle.xml but I remember that when they introduced the feature it only worked automatically for new projects and you had to manually import the file in their UI for existing ones to update the rules in codacy. @raff did you import the checkstyle.xml when you set openmrs-core up on codacy? If it was you who set it up

Can someone with permission to see the settings in codacy please copy and add the badge URL into the openmrs-core readme, so it motivates us to improve our score

I think it was @pascal who set it up. It wasn’t me for sure. @pascal, can you add @teleivo to be able to manage codacy for openmrs? @teleivo, what is your username there?

@teleivo, what is your username there?

interesting. When I now click on the badge I end up at

which shows the dashboard with a banner

The GitHub integration is disabled. Please ask an administrator of this project to enable it.

I did enable integration for openmrs-bot as requested. Maybe it is under infrastructure instead of openmrs at codacy. I’ll check.

We can certainly (hopefully) delete the “infrastructure” account set up for openmrs-bot and move it under /openmrs/, but it looks like @pascal will need to do that, since I don’t know how the /openmrs/ codacy account is set up (I can’t find shared credentials via LastPass or any mention of codacy on the IT wiki).

(If that was fixed sometime since my first post on this thread in April 2016, but if so, it has regressed.)

If I am given permission to change settings on codacy I can for now apply the 2. option.

Sorry guys, I’ve just noticed I’m actually added to openmrs project admins on codacy. I’ve added burke (by your openmrs e-mail) to the project. @burke, you should be able to set up the integration now with openmrs-bot. Please disable the one in the infrastructure project.

I just wanted to point out, that the warning is coming from PMD and not checkstyle. It should be suppressible by adding a ruleset.xml file, which codacy should find. See [0] & [1]

its a bit more complicated.

@raff added us both to the openmrs account on codacy as admins so you should then be able to add the integration on the correct codacy account here https://www.codacy.com/app/openmrs/openmrs-core/dashboard then the PRs should be fine again

Why not simply drop Codacy and keep using Sonar?

its been already mentioned in the thread but in summary:

I doubt that Sonar is the culprit of the infrastructure problems (at least JIRA was crashing because out of memory problems, and RAM is not expensive ).

Anyway, SonarQube is also available in the cloud, free for OS projects. And IMHO the UI is better than Codacy’s 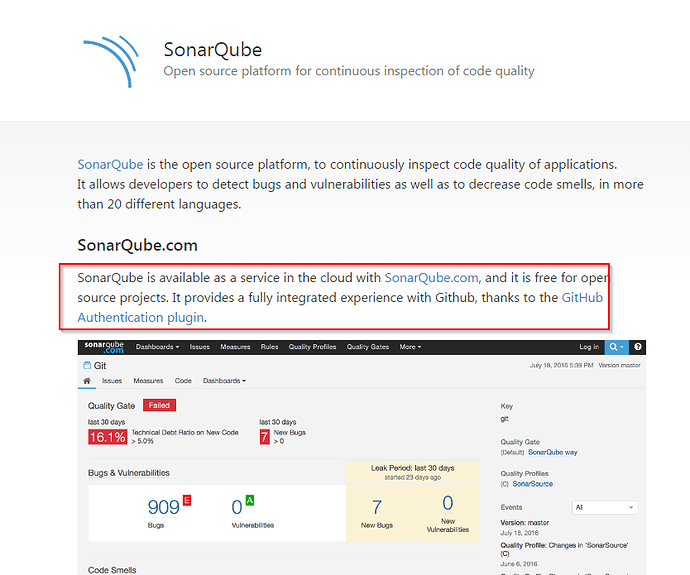 I personally don’t mind if developers prefer Sonar or Codacy, or even both.

But in all fairness, sonar is not causing any big harm to our infrastructure, indeed. If you tell me that we can have the same software for free in the cloud, with all the features we need, I’d totally prefer that

Anyway, SonarQube is also available in the cloud, free for OS projects. And IMHO the UI is better than Codacy’s

good to know, thanks @lluismf

I think we agree on:

What we dont yet fully agree:

There is more work needed to establish the github PR integration on https://sonarqube.com as shown https://docs.sonarqube.org/display/PLUG/GitHub+Plugin at the end where they refer to https://github.com/SonarSource/sonarqube/blob/master/travis.sh thats why I was leaning towards codacy